PCR stands for polymerase chain reaction, which is powerful technique used for in vitro exponential amplification of a specific DNA region (target region) that lies between two regions (primers) of known DNA sequence, resulting in a large quantity of DNA (~ micrograms of DNA).

The invention of PCR has long been considered as an "Eureka" event occurred on Kary Mullis' travel to his cabin[Eureka moment]. However, it would not happen if the following milestones in molecular biology had not taken place:

Interestingly, Khorana and his student had very close chance to make this invention under their names: their project "repair synthesis" [4]. They applied primer, template and polymerase in the in vitro system. They repeatedly adding the polymerase every cycle. However, there was only one primer, and therefore, no accumulation for the DNA product. Even Khorana's student Kleppe wrote following words on the paper of this project, which is famous for its involvment in the PCR patent lawsuit [5], but failed to give any substantial bench proof thereafter:

"... one would hope to obtain two structures, each containing the full length of the template strand appropriately complexed
with the primer. DNA polymerase will be added to complete the process of repair replication. Two molecules of the original
duplex should result. The whole cycle could be repeated, there being added every time a fresh dose of the enzyme." [4]

Needless to say, Kary Mullis is the inventor of today's PCR technique. And this has to go back to 1979 when he was hired by Cetus Corporation(though PCR patent later sold to Roche and company to Chiron) as a head of oligo synthesis lab. After invention of PCR, he admitted it was a "labrious" job [6].

In May 1983, Cetus was working on Sickle Cell Anemia project. And somehow, Kary wanted to develope "a technique for easily determining the identity of the neucleotide at a give postion in a DNA molecule" [6]. Frustrated by Sanger's sequencing method, he worked out the PCR idea on his driving trip to his wooden cabin [6].

Ironically, only one consultant showed interest in Kary's idea on a Cetus annual meeting in 1984[6]. And it was not until later, by Saiki's paper [7] on Sickle Cell Anemia that the bench proof for PCR finally came.

Initially, PCR was done with Klenow fragment [7]. Its therma-unstable feature brought the tedious and error-prone trouble of adding fresh enzyme each cycle. Thanks to the discovery of Thermus aquaticus by Thomas D. Brock, and isolation of its DNA polymerase by Trela [8] , PCR technique is more productive, sensitive and reliable [9].

The most obvious advantage of PCR technique is its exponential production of the target sequence. This means that it achieves great specificity and reaction yield at the same time. The beauty of acquiring this seemingly conflicting features comes from its idea of using site specific primers and cycling-multiplication in an exponential way, which can be illustrated by the following cartoon:

As can be seen there is three major steps in a PCR, which are repeated for about 30 cycles, which is done on an automated heat cycler, a machine that can heat and cool the tubes in a very short time by semiconductor technique.

During the denaturation, the double strand melts to single stranded DNA, and all enzymatic reactions stop (esp: the extension from a previous cycle).

The primers are moving around via the Brownian motion. During this process, bonds are constantly formed and broken between the primer and the template. The more stable bonds last longer (primers that fit exactly) the more time it acquires for the polymerase to attach and start copying the template.

The temperature is chosen as this for the extension activity of the polymerase. Primers have been attached firmly enough(according to annealing process and designed specificity). The bases (complementary to the template) are joined to the primer on the 3' side (the polymerase adds dNTP's from 5' to 3').

In this process, newly formed (synthesized, but with the loyalty to the parental target DNA sequence) strands can be used immediately in one-pot for the next round of reaction. Thus, through this repeating cycling, the final product is exponentially amplified. 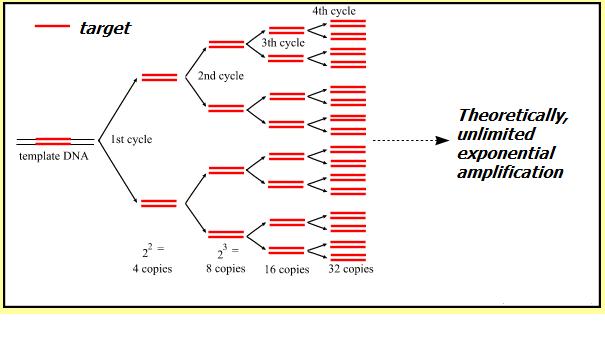 However, seemingly unlimited exponential amplification of the production is bound not to happen on bench. Due to apparent reasons that the reaction slows as the DNA polymerase loses activity and as consumption of reagents such as dNTPs and primers. The reaction will finalize on a so called plateau stage where no more product is made. 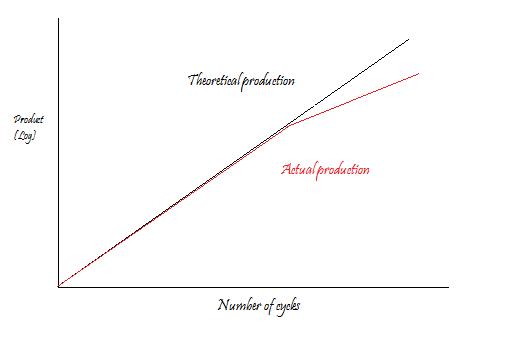 Frequently, one wants to get the information of the expression of a gene or characterizing an RNA transcript. In these cases, Reverse Transcription PCR is a convenient tool. The main difference of this between the normal basic PCR technique above is this one starts with an mRNA instead of a double-stranded DNA. The RNA to DNA step can be done with reverse transcriptase and reverse primer. Once the single stranded DNA is obtained, a forward primer can be used to convert it to double stranded one. Then the same PCR process is operated with these two primers until the desired amount of DNA is obtained.

Real-Time PCR is a way of quantifying the amplification of a DNA as it occurs-that is, in real time. As illustrated in the following graph: after separation of two DNA strands, they are annealed, not only to the forward and reverse primers, but also to a fluorescent-tagged oligonucleotide that is complementary to part of one of the DNA strands and serves as a reporter probe. This probe has a fluorescent tag at its 5' end and fluorescence quenching tag at its 3' end. During the polymerization step, the polymerase extends the forward primer and then encounters the reporter probe. When that happens, the polymerase begins degrading the reporter probe. As the probe is degraded, the fluorescent tag is separated from the quenching tag, so its fluorescence increases dramatically. A fluorimeter can measure the intensity along the PCR reaction course, which in turn, gives the real time progress.

Unfortunately, both the above techniques are under the name of RT-PCR, if abbreviated for convenience. Thus, it is needed to differentiate these two in context. However, if two are put together, the frequently seen name is "real-time RT-PCR" or "qRT-PCR".

Or so called Overlap extension PCR. This technique is to insert mutations at specific points or to join the spliced smaller DNA fragments into a larger one. As can be seen from the following graph, this PCR consists of two stages: 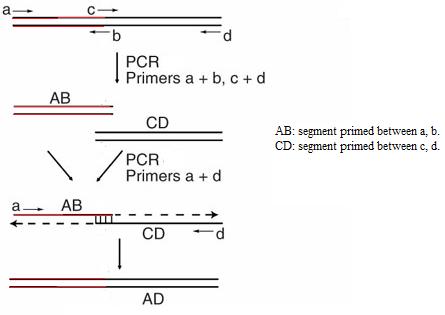 On the first stage, it is normal PCR amplifying the two segments subjected for joint. Specifically, primers for the joining position are designed in a way that they overlap with each other. Mutations can be inserted into these primers if needed.
On the second stage, the products from the first stage, the individual segments waiting for joining is denatured and annealed with each other. This can be done because of the joining primers on the first stage can hybridize with one another. Then, by applying only the end primers (primers that prime the ends of the longer joint final product), another PCR is performed. The final longer segment is thus formed and amplified.

Site-directed mutagenesis is of great use in protein rational design or as an investigative tool for molecular biology studies. And it has evolved from using Kunkel's method into Quickchange Mutagenesis[11], which is a simple, reliable, efficient way of doing whole plasmid mutagenesis, as illustrated from the following image: 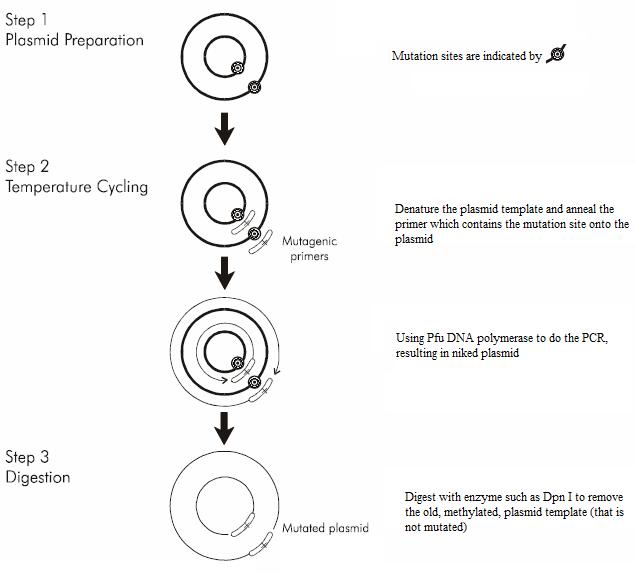 Firstly, a pair of mutation site containing primers are used. This time, the template is the whole plasmid. PCR reaction uses a high-fidelity DNA polymerase such as pfu polymerase. The reaction generates a nicked, circular and relaxed DNA. The original normal template DNA must be eliminated by enzymatic digestion with enzyme such as DpnI which is specific for methylated DNA. All DNA produced from most Escherichia coli would be methylated; the template plasmid will therefore be digested, while the mutated plasmid is generated in vitro and is therefore unmethylated would be left undigested, and is submitted for next round with final filling up of the nicks in host cells.
A whole set of QuickChange methods and protocols can be found at QuickChange of Stratagene.

DNA shuffling is an important tool in In vitro directed evolution, which uses the protein engineering principles to harness the power of natural selection to evolve proteins or RNA with desirable properties. Traditionally, DNA shuffling is done through a restriction enzyme way: gene members from a family are digested with restriction enzymes and are further ligated to produce hybrids for subsequent screening. However, a PCR mediated way, as illustrated by the following graph is of more efficiency. 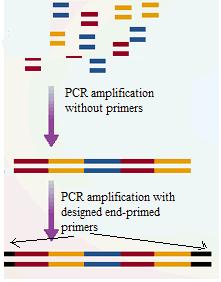 This technique begins by fragmenting a pool of double-stranded parent genes with DNase I. Then selecting small fragments by size fractionation to maximize the probability of multiple recombination events. After this, the first round of PCR is performed with no added primers, instead, small fragments that overlap with each other cross-primed at this stage. After filling the space of a long recombined product from the fragments, another round of PCR is performed to amplify the recombined full-length product using terminal primers.
However, there is drawbacks to this diversification: Most DNA shuffles on average of just 4 crossovers per round, limiting the potential diversity. Furthermore, crossovers in regions of identity shorter than 15 bases are rare, resulting in lengthy tracts of sequence still contains up to 100% unshuffled parental wild-type clones after the shuffling attempt[12]. A new technique called RACHITT [13](Random Chimeragenesis on Transient Templates) can overcome some of these to some extent. RACHITT begins with fragmentation and size fractionation of single-stranded DNA, and hybridization without polymerase to a complementary single-stranded scaffold of poly uracil. Any overlapping fragments with overhangs will be trimmed down (Mismatch or overlapping). The gaps between fragments are filled in by complementarity; the fragments are then ligated to get a full-length, diversified single strands hybridized to the scaffold. The poly-uracil scaffold can be efficiently degraded to preclude its amplification. With PCR, it is replaced by a new strand complementary to the recombined product, and the whole is amplified for subsequent screening test.

PCR is applied usually with known sequence. And in this way, primers can be specifically used to prime the target sequence with it being amplified. However, it can also be used in cases when we want to explore the unknown flanking regions, as shown by the following graph: 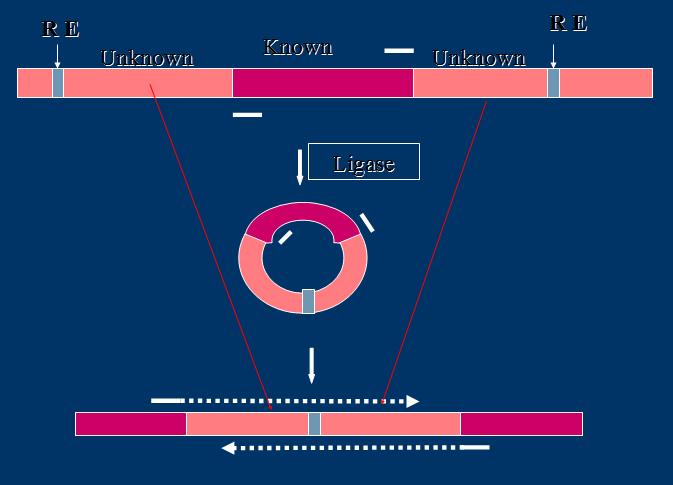 In this technique, as can be seen from the graph, restriction enzyme site is being "inserted" into the flanking regions, providing a basis for future ligation of the linear sequence into a plasmid. Once this plasmid is formed, primers from the known sequence can be used for PCR of this plasmid in a normal way. A way, if seen from a prospective of the previous linear segment, is to amplify the unknown flanking regions.
The "insertion" of the restriction enzyme cutting site is not actually inserted by primer design, since the flanking sequence is unknown. Generally, this is implemented through a genomic cutting by only one type of restriction enzymes (so that the cohesive ends can join with the same complementarity).