Metabolic engineering deals with modifying the metabolic and chemical pathways of a cell in order to alter the amount of a certain product that the cell can produce. This entails computation and bioinformatics to predict the effect of gene deletions on a cell’s metabolic pathways. Research on the metabolic engineering of Escherichia coli has been successful because there is an abundance of information and experiments on the genetic sequence and metabolic pathways of E. coli.

Edwards and Palsson focused their work on E. coli metabolism by the flux balance analysis (FBA) method, a mathematical approach to predict metabolic capabilities. When a gene is deleted, then the flux, or output, of the corresponding pathway is constrained to zero. Genes encoding products of central metabolic pathways were deleted in E. coli in silico, and the resulting cell’s ability to grow were measured through FBA. These results matched 86% with existing mutants production. The goal of these studies is to utilize this information to predict the best a cell can produce under certain conditions, and what it cannot produce under those conditions. [1] [2]

A method described in Dueber et al to increase flux without increasing expression which can create a burden on the cell is by using synthetic scaffolds. Scaffolding is basically adding ligand sites to the enzyme and its binding reagent to easily separate and control their interaction. This was done on a biosynthetic pathway to produce mevalonate in E. coli by creating a scaffold for each of the three enzymes involved in mevalonate production. Each scaffold was created from glycine-serine linkers and a protein-protein interaction domain for each enzyme, GDB for the AtoB enzyme, SH3 for the HMGS enzyme, and PDX for the HMGR enzyme. With this scaffolding, they were able to see a 77-fold increase in the production of mevalonate. [3]

E. coli has become a primary source in the microbial production of biofuels because of the ease of metabolic engineering on E. coli. There are many carbon sources that can be used by E. coli to produce intermediate metabolites, and there is great potential in the engineering of effective pathways of these carbon sources; the difficulty comes in engineering pathways to turn these intermediates into useful biofuels as described in Clomburg and Gonzalez. These secondary pathways can be either fermentative or nonfermentative. The issue with fermentative pathways is that they use simple sugars to not only produce ethanol, but also other acids such as acetic acid, lactic acid, and others. So the goal of metabolic engineering in relation to the fermentative pathways is to refine the pathway to simply produce ethanol. Engineering nonfermentative pathways have led to biofuels closer to gasoline, however, these pathways are synthetic and do not naturally occur in E. coli. Through additional research, there is hope that microorganisms, especially E. coli can be used to synthesize biofuels vital to society today from renewable carbon sources. [4] 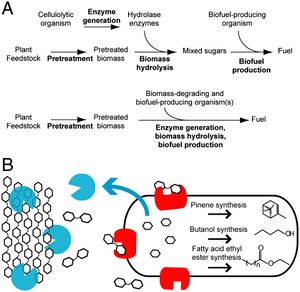 The latest experiments have engineered microorganism like E. coli to produce fuels compatible with modern engines. E. coli is ideal also because it has been engineered to produce a wider range of chemicals than any other known organism. However, there are many issues involved with the attempt to make E. coli use lignocellulose as a carbon source:

Bokinsky et al engineered E. coli to overcome these obstacles by regulating the expressions of enzymes capable of being exported by E. coli that allow the cell to digest cellulose that has been pretreated with ionic liquids (IL), but as of now these IL are too expensive for commercial use. IL eliminates crystallinity and decreases lignin concentration decreasing the amount of enzymes needed to break down cellulose. This is a major advancement because the products from digestion of IL pretreated cellulose can be used in E. coli biosynthetic pathways to create gasoline, diesel, and jet fuel without the need for extra enzymes. At the same time major improvements in breaking down biomass and producing biofuels are necessary before these processes can be applied to industrial uses. [5]

E. coli has a high tolerance for organic acids, but can only tolerate up to 35g/L of ethanol and 2% volume of butanol. There have been improvements on these tolerances, but more improvement is still needed before E. coli can be an industrially competitive biofuel source. However the high tolerance of organic acids allows succinic acid production in E. coli by overexpressing pyruvate carboxylase and fumarate reductive genes. The pyruvate carboxylase gene method produced 99.2g/L of succinic acid, and the fumarate reductive gene reduced fumarate to succinic acid by up to 93% conversion rates. Succinic acid is used as a platform chemical that can later be converted into 1,4- butanediol to make plastic, fibers, and polyurethane. However, to be a practical source, yields need to be 0.88g/g with a rate between 1.8-2.5 g/L/h; this has yet to be achieved. [6] [7] 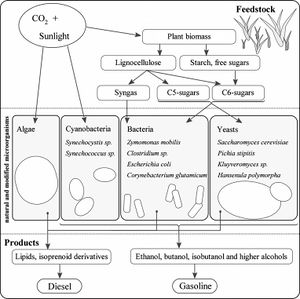 Ethanol as a biofuel has many issues including its corrosive properties which make it not possible to transport in pipelines of the existing fuel distribution infrastructure. Higher chain alcohols like butanol however have properties that make them more compatible with the existing fuel distribution infrastructure including lower vapor pressure and less hygroscopic properties. For E. coli production of butanol, the ptb-buk operon from Clostridia was cloned into E. coli for the production of n-butanol and butyrate from acetyl CoA. However, the production has never reached 15% or more of the theoretical yield. Measurements of main genes is this operon, the electron transfer flavoproteins(etf) A and B and Butanoyl-CoA dehydrogenase enzyme(bcd), showed low to no activity, but without them there is no production of butanol at all. To improve yields, pathways of acetate, ethanol, and lactate were inhibited. The yield of butyric acid from glucose as a result was 0.1mol/mol ratio. The deletion of these pathways did not affect the growth as long as oxygen was limited. The analysis led to a conclusion that the bcd gene encodes another enzyme that somehow limits the biosynthesis of butanol and butyric acid compared to the theoretical yield of E. coli. Calculations indicate that to be industrially competitive there needs to be at least 100g/L productivity with 2g/L/h and a yield of at least 95% of the theoretical yield. [7] [8]

Current biofuel and biodiesel industries use corn starch, sugar cane, vegetable oil, and animal fats which compete with food industries making them economically impractical. The use of lignocellulose would be very economically practical because sources include crop wastes, forestry residues, and municipal solid waste which are abundant and have no competitive industries. However, lignocellulose does need to be pretreated before it can be broken down by microorganism enzymes. [8]