Synthetic biology tends to focus on the assembly of defined parts and modules into novel circuits that perform some interesting or useful task. However, with the exception of in vitro transcription/translation systems, none of these complex constructions exist on their own, but rather in the context of a host cell and all of its cellular machinery and components. As a result, genetically identical genes and constructs will display different behavior in the context of different host cells. For this reason, understanding, constructing, and evolving host strains (described as "chassis" in synthetic biology jargon),is crucial to the development of reliably functioning biological systems.

Escherichia coli: Escherichia coli is a gram-negative bacterium found in the human gut and a model organism in biological engineering research. It is the most intensively studied prokaryotic model organism, is easily transformed, has a rapid doubling time, and is a biosafety level 1 organism. All of these characteristics make it ideal for genetic engineering.

Bacillus subtilis: B. subtilis is a gram-positive model organism. It is easily transformable and its genome has been sequenced. It forms spores when exposed to stressful environments, which can make it difficult to kill with strategies often employed to kill bacteria.

Acinetobacter: Acinetobacter is a genus of gram-negative bacteria often found in soil and implicated in many infections of debilitated individuals. It is known for its exceptionally high natural competence, or ability to take up and incorporate foreign DNA into its genome. These properties make it ideal for studies of horizontal gene transfer, and some argue as a model organism for genetic engineering. [1]

Saccharomyces cerivisiae S. cerivisiae is a species of yeast used commonly in brewing and baking. It is eukaryotic, has a diploid and haploid stage of its life cycle, and is among the most intensively studied single-celled eukaryotic model systems. [2]

TOP10 E. coli can be purchased from vendors like Invitrogen, typically come at a transformation efficiency of 1 x 10e9 cfu/µg supercoiled DNA, and are ideal for high-efficiency cloning and plasmid propagation. They allow stable replication of high-copy number plasmids. Invitrogen TOP10 cells

BL21 is a common protein expression strain. Chemically competent cells can be acquired from vendors such as NEB at a transformation efficiency of 1–5 x 10e7 cfu/µg pUC19 DNA (note: much lower than TOP10). NEB BL21 cells

T7 RNA Polymerase: (T7 gene1) is encoded by the lambda DE3 prophage present within the chromosome. T7 RNA polymerase is expressed from the lacUV5 promoter, which is less sensitive to catabolite repression than the wt lac promoter. Thus DE3 strains may exhibit uninduced target protein expression. Although λDE3 is normally dormant in the host chromosome, the induction of the SOS cascade can occur as the result of expressing proteins that damage the E. coli chromosome, either directly or indirectly. This may lead to cell lysis. T7 Express strains do not carry the DE3 prophage and better tolerate an SOS response.

Protease Deficient ([lon] ompT): E. coli B strains are “naturally” deficient in the lon protease which in K-12 strains serves to degrade misfolded proteins and to prevent some cell cycle-specific proteins from accumulating. The OmpT protease resides at the surface of wild type E. coli in both K-12 and B strains, presumably helping the cells to derive amino acids from their external environment. Cells deficient in both these proteases are much more amenable to the production of proteins from cloned genes.

T1 Phage Resistant (fhuA2): T1, an extremely virulent phage requires the E. coli ferric hydroxamate uptake receptor for infectivity. Deletion of this gene confers resistance to this type of phage, but does not significantly affect the transformation or growth characteristics of the cell.

One strategy to minimize undesirable interaction of a synthetic construct with host machinery is to use orthogonal components. "Orthogonal" comes from the Greek orthos, meaning "straight", and gonia, meaning "angle". It has somewhat different meanings depending on the context, but most involve the idea of perpendicular, non-overlapping, varying independently, or uncorrelated. In this context, it means using components in your systems that do not come from the host cell and presumably interact minimally with the host cell.

One example is the use of genes that come from very unrelated organisms, presumably minimizing interactions within host cells. Another more extreme example is the introduction of the T7 RNA polymerase and an orthogonal ribosome to Escherichia coli, and using these components for the expression of the rest of your gene circuit. [3] This strategy somewhat uncouples circuit behavior from the endogenous ribosomes and RNA polymerase. 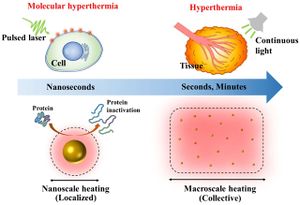 One approach to creating more reliable, efficient host organisms for synthetic constructs is the reduction of the genome to eliminate extraneous genes, mutagenic mobile elements, and other unnecessary or destabilizing factors. This can be viewed as a form of reverse engineering of extant strains.

One natural approach to engineering strains with a reduced genome is to systematically identify and delete regions of the genome not necessary for host cell survival. Posfai et al. created the MDS strains (multiple deletion strains) by aligning the genomes of multiple genomes of E. coli, identifying regions which were absent in multiple strains, and deleting them via Lambda Red recombination. All IS elements were removed as well, lowering the mutation rate and increasing the stability of genetic constructs introduced into the cell. The strain had comparable growth rate compared to wild type.[4][5]

Ara et al. constructed a minimal version of the B. subtilis genome in 2007. [6] This strain had slightly decreased growth rate compared to wild-type, but displayed normal morphology and similar protein production capabilities. 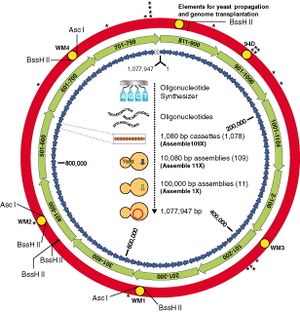 Another approach is the synthesis of a minimal, designed genome from scratch using DNA synthesis technology and the transformation of this genome into cells to create a viable, novel, synthetic organism. This approach can be viewed as forward engineering of a novel organism, but would likely be informed by studies which determine the minimal set of genes necessary for a living organism.

Gibson et al synthesized the first artificial cell by generating the Mycoplasma mycoides genome from digitized genome information and transforming it into Mycoplasma capricolum cells devoid of genomic information. These cells were capable of continuous self-replication and were identified by "watermarks" inserted in the genome. This technology could be utilized in the future to create cells with novel and useful properties from scratch.[7][8]

Yeast as a Model Organism

The following table summarizes some of the advantages and disadvantages of using yeast as a model organism for synthetic biology. [2] 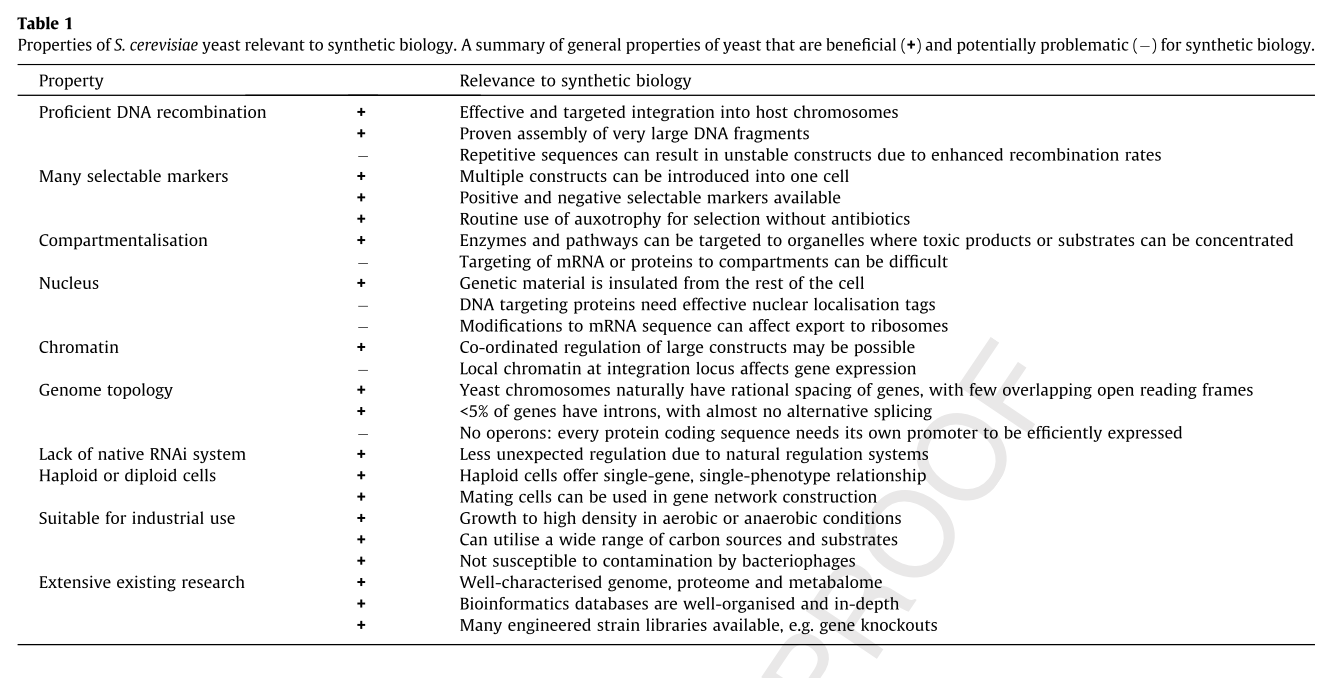