In contrast to selection markers, counter-selection markers serve to eliminate unwanted elements. These markers are often toxic or otherwise inhibitory to replication under certain conditions. Selective conditions often involve exposure to a specific substrates or shift in growth conditions. These elements are often incorporated into genetic modification schemes in order to select for rare recombination events that require the removal of the marker or to selectively eliminate plasmids or cells from a given population. 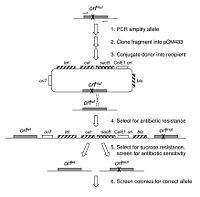 The introduction of specific mutations in a genetic sequence is a powerful way to learn about gene function or to engineer an organism for a desired application. A common way to introduce specific mutations into a target sequence is through allelic exchange. In a typical allelic exchange experiment, the chromosomal sequence to be mutated is synthesized and cloned onto a vector. This sequence is either highly homologous (except for the introduced mutations) to the chromosomal version or else is flanked by homologous sequences specifying the desired insertion site. Upon introduction to the cell, the cell’s homologous recombination machinery will recognize the sites of homology between the vector and the chromosome and at some frequency will stimulate the integration of the vector at the site of homology. This event is often selected for by the presence of a selectable marker present on the vector. Following this selection, it is often desirable to remove the vector to produce a “seemless” insertion. For this purpose, a counterselectable marker is included on the vector. Upon induction of the counterselectable condition, only those cells that have excised the vector sequence through a second recombination event will survive. Since this recombination event is usually rare the counterselection step is essential to find the desired mutants.

It is often necessary to "cure" or isolate cells that have lost a plasmid. This can typically be achieved through serial passage in non-selective media and screening for plasmid loss. Counterselective markers can be incorporated onto plasmids so that their loss can be selected for. A common strategy includes the use of a temperature sensitive origin of replication. These engineered origins permit replication at a permissive temperature but prevent replication upon switch to the counterselective temperature. After a period of growth at the selective temperature, the plasmid will be lost because it fails to replicate when the cell divides. Another strategy involves the inclusion of a counterselectable marker (see "parts" below) on the vector allowing for selection of cells that lose the plasmid on their own.

The tetAR genes endow the cell with resistance to the antibiotic tetracycline by altering the cell membrane making it impermeable to the drug. However, this alteration makes the cell hypersensitive to lipophilic chelating agents such as fusaric or quinalic acids. This enables selection of cells that have lost the tetAR genes by exposure to fusaric acid[1].

sacB is perhaps the most widely used counterselectable marker. The sacB gene was isolated from Bacillus subtilis and encodes the for the enzyme levansucrase. Expression of sacB in most gram-positive bacteria is harmless, but is lethal when expressed in gram-negative bacteria in the presence of sucrose [2]. The mechanism of toxicity is not completely understood but it is believed to be caused by accumulation of levans (high molecular weight fructose polymers) in the periplasm of gram-negatives.

ccdB is the toxin component of the toxin-antitoxin system of the F plasmid. ccdB is a DNA gyrase inhibitor which causes cell death when the ccdA antitoxin is not present. There is a known mutation of the DNA gyrase gene (gyrA462) that confers resistance to the ccdB toxin[4]. This allows plasmid vectors that contain ccdB to be propagated without associated toxicity in the absence of ccdA Cloning vectors that contain the ccdB gene can be used to select against vectors that fail to accept a desired insert when transformed into a wild-type gyrA strain. This cloning scheme virtually eliminates background. The Invitrogen "Gateway" cloning system takes advantage of this method [1].

The URA3 gene from Saccharomyces cerevisiae encodes for orotidine-5'-monophosphate decarboxylase which is involved in de novo synthesis of pyrimidine nucleotides (pathway [2]). URA3 normally catalyzes the decarboxylation of orotidine 5-phosphate (OMP) to uridylic acid (UMP). The gene is especially useful as a marker in that it can be used for both selection and counterselection[5]. Many common yeast strains contain a mutation in the URA3 gene making the cells auxotrophic for Uracil. Supplying an intact copy of the URA3 gene on a plasmid or integration cassette restores prototrophy and can be used to select for cells which have taken up the vector containing the marker. URA3 is also known to convert 5-Fluoroorotic acid (5-FOA) into the toxic compound 5-fluorouracil leading to cell death. Therefore, counterselection on 5-FOA will select for clones which have lost the URA3 marker.

It is important to note that the URA3/5-FOA system only works in Saccharomyces cerevisiae in strains with a chromosomal URA3 mutation. Recently the system has been ported to bacterial species[6]. By identifying the URA3 homolog, (pyrF in E.coli and p.putida) and deleting it, URA3 selection/counterseletion can be employed.

pheS encodes the α subunit of the Phenylalanine-tRNA sythetase. A known mutation in this protein (G294A) relaxes the substrate specificity of the enzyme causing toxic phenylalanine analogs like p-chlorophenylalanine to be incorporated into proteins in place of phenylalanine[7]. When grown on media containing p-chlorophenylalanine, cells harboring the mutant version of the gene will be eliminated. Unlike the rpsL counterselection, the mutants pheS phenotype is dominant meaning that the presence of the mutant gene will still cause toxicity when the wild-type version is also present. This strategy has been used in both Gram-negative and Gram-positive bacteria.

Thymidine kinase (TK) is a popular counterselection tool used in mammalian cell culture. TK is involved in the salvaging of nucleotides for DNA synthesis through the phosphorylation of deoxythymidine to deoxythymidine 5'-phosphate (TMP). Cells lacking TK will not grow on media that blocks the de novo synthesis pathway. For this reason HAT (Hypoxanthine-aminopterin-thymidine) media can be used to select for TK knockout cells that contain an introduced copy of TK.

If a given cell line is deficient for TK, growth on HAT media which contains aminopterin will prevent the production of tetrahydrofolate (THF) through the inhibition of dihydrofolate reductase. THF is a required cofactor needed for the de novo production of TMP by Thymidylate synthase. With the de novo pathway disabled, the cell will need to have a functional copy of TK to phosphorylate the available Thymidine in the media to TMP and resume DNA synthesis.

Cells containing the Thymidine kinase gene can then be counterselected against by the addition of toxic Thymidine analogs such as 5-bromo-deoxyuridine or Ganciclovir. These Thymidine analogs are chain terminators which do not have a hydroxyl group in the 3'-position which is required for continued chain elongation. Thus, cells with TK will be eliminated due to their inability to synthesize complete DNA sequences.

Counterselection against certain populations of cells can also be obtained through the use of strains auxotropic for a particular metabolite. A point mutation or deletion in a gene required for amino acid synthesis, carbon source metabolism, etc can be used to select against strains when grown on media lacking the required nutrient. In most cases a defined "minimal" media is required for counterseletion. There are a number of counterselective auxotropic markers that can be used in rich media, examples from E. coli include thyA and dapA-E.

ThyA encodes thymidylate synthetase which is involved in de novo synthesis of dTMP from dUMP which is required for DNA synthesis [3]. A mutation in thyA makes the cell severely auxotrophic for Thymine. A useful aspect of this marker is that growth in rich media does not provide enough Thymine to support growth of thyA mutants, enabling selection against the thyA mutant. Similarly a mutation in the gene dapA which encodes Dihydrodipicolinate synthase makes the cell auxotrophic even in rich media for diaminopimelic acid which is required for Lysine and cell wall (peptidoglycan) biosynthesis [4].