Bacterial communities are capable of producing a wide variety of odor molecules. At its most basic, an odorant is simply a volatile organic compound (VOC) capable of triggering an olfactory response. These compounds fall into many categories, and a few examples will be discussed here. These compounds can be produced for a variety of reasons, from simple metabolic byproducts to targeted cellular messengers. Although bacteria don't have an olfactory system in the same sense as higher organisms, there is evidence that bacterial communities can communicate via volatile airborne compounds and that they may be an important bacterial defense sensor.

It's difficult not to view bacterial odorant production through a human lens, but it's important to remember that the particular descriptions of these compounds are purely coincidental when it comes to smell. When it comes to odorants produced naturally by bacterial populations, it's much more appropriate to view the compounds as products of synthetic pathways and not clouding them with human "uses" or "what they remind us of". That being said, naturally occurring bacterial odorants have been used by humans and other organisms to very interesting ends.

Carnivorous mammals including dogs, wolves and hyenas possess potent scent glands near their anus called apocrine glands. These sacs produce a thick liquid or paste that the animals use to mark territory and identify each other. This is why you see dogs sniffing near each other's anuses when meeting each other. Human and primate apocrine glands migrated upwards to our chest and armpit regions as we began to walk upright, and today they remain the source of our armpit odors. The glands produce a mostly odorless liquid, which is in turn metabolized by hundreds of species of skin-dwelling bacteria, with high densities of Corynebacteria. Similar compounds are produced by digested secretions from the groin and foot regions. 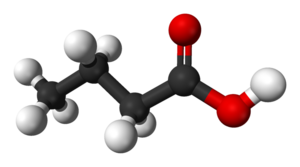 , also present in vomit, butter and Parmesan cheese and detectable by humans down to 10 ppm. There are hundreds such compounds produced by skin-dwelling bacterial species.

Several groups have engineered bacteria to produce unnatural odorant molecules. This method is similar to metabolic engineering pigment or other biosynthetic pathways in that exogenous single- or multi-enzymatic pathways are introduced to convert precursor molecules to a desired volatile compound.

The 2006 MIT iGEM team created an E. coli strain that emitted a wintergreen scent (methyl salicylate) in log phase growth and then switched to producing a banana scent (isoamyl acetate) when nutrients became scarce. They used a chassis strain called YYC912 (tnaA5-) that is deficient in indole production (the characteristic foul-smelling compound of E. coli cultures). Genes were introduced that could synthesize the VOCs from media additives (salicylic acid) or natural amino acid production (leucine).

They then assembled a circuit where the default state for M. salicylate production during exponential growth is "on". The wintergreen pathway is under control of the osmY stationary phase promoter upstream of a TetR transcriptional inverter. The isoamyl acetate pathway is under control of the osmY promoter alone. When osmY transcription is activated at stationary phase, the wintergreen pathway is inverted to "off" and the banana pathway is activated.

The Parts Registry contains pathways to produce many other VOCs including vanillin, pinene, jasmine and floral odors (among others).

Until recently, the odorant molecules produced by bacteria were not thought to have much biochemical significance to the microbes themselves. Via a laboratory accident, Bacillus licheniformis was found to respond to the presence of gaseous ammonia by forming a biofilm[1]. When the researchers were trying to save space on a plate by culturing two different strains together, those closest to wells producing ammonia turned red as biofilm production was induced. 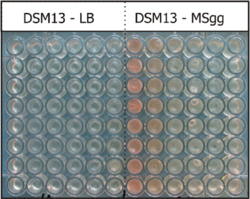 Acetaldehyde detection and subsequent gene activation by Aspergillus nidulans has been characterized and engineered into mammalian cells in culture. Reporter genes or genes of interest can be put under control of the A. nidulans acetaldehyde-sensitive transactivator/promoter and turned on via acetaldehyde in a dose and concentration dependent manner[2]. 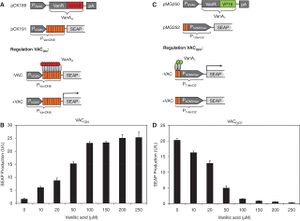 As more odorant-sensitive pathways are discovered and characterized, olfactory circuit options for bioengineering will be expanded, as has recently been shown for a vanillin-inducible system in mammalian cells[3].