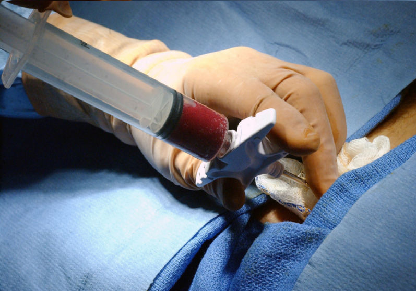 Bone marrow transplantation is the process in which bone marrow is harvested- from a donor or from the patient- and then given intravenously to a patient to treat a host of different diseases [1]. Hematopoietic stem cells is the therapeutic component of bone marrow. Their main use is the treatment of hematological and lymphoid cancers. There are currently nine million potential donors in databases around the world; matches for bone marrow transplants are found over 50% of the time. Due to the time it takes from match to donation - three months- only about half of those matches are actually utilized [6]. The motivation for continued research in this area is due to the wide spread application of HSC that will be covered in detail in the following sections. 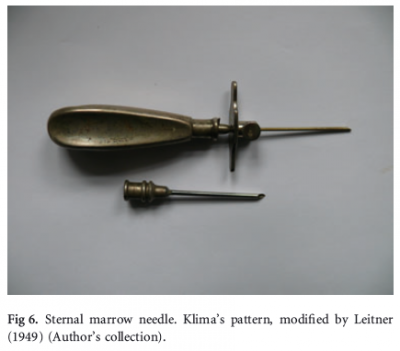 1903 – Pianese, Italy, is the first person to take a bone marrow sample for diagnostic purposes. The sample was taken from the femur by a surgical trephine [1].

1922 – Seyfarth makes puncture needle to get bone marrow from rib bones. He recommends the use of gloves and a gown for this procedure but determines that no anesthesia is required for the patient [1].

1927 – Anirkin, Russia, uses a lumbar puncture needle to take marrow from the sternum; his method was used to diagnose typhus and tuberculosis [1].

1929-1938 – Healthy volunteers give marrow without anesthesia just for the good of science [1].

1943 – The first death occurs by accident when the heart is punctured when taking a sternum sample of bone marrow [1]. 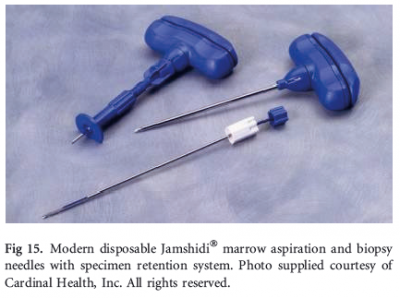 1959 – Georges Mathe performs the first successful bone marrow transplant not on identical twins when one twin was dying of end stage leukemia [2].

Mid 1960’s- The typing of histocompatibility complexes allows for matching of donors to patients. It’s found that ¼ of all siblings have the same complexes [6].

1990’s – Storb introduces low dose irradiation and immunosuppressive drugs to permit engraftment and prevent graft versus host disease (GVHD). He then went on to decrease rejection rates by adding an antirejection agent before irradiation. It’s a gentle, safe, and effective method but for serious cancers there is the risk of relapse from the lack of GVHD [6].

High dose irradiation will kill a person rather quickly. A low dose of radiation damages the intestinal track and central nervous system. These people will slowly die of organ failure. Bone marrow transplants in humans were first conducted to save those that had been accidentally irradiated [6].

Cancers of the blood, for example leukemia, are prime candidates for bone marrow transplants. Leukemic cells are replenished by leukemic stem cells much as normal cells are renewed from noncancerous stem cells. Chemotherapy only attacks fast growing cells but stem cells are usually quiescent. GVHD attacks the cancerous cells that are left behind and kills them. Minor antigens on the surface of the donated cells from the Y chromosome account for and increase GVHD in male recipients from female donors. This results in more cures/remissions than other treatments but may cause a serious immune reaction that can result in death [6].

Thirty-two attempts to cure AIDS with bone marrow transplants were conducted between 1982 and 1996. In two patients HIV was eradicated (test positive to negative). One transient disappearance occurred and many other patients had clinical improvement. This includes a xenotransplantation from a baboon into a human patient as baboons are unable to acquire HIV [7].

The first attempt in 1983 to cure AIDS with a bone marrow transplant was done to two men but they had progressed too far into the disease already and died. In 1984 a second, healthier, male got a bone marrow donation from his identical twin brother and showed immunologic improvement but no clinical improvement and died in 12 months [7].

HIV enters into cells with the help of CD4 surface molecule and co-receptors (mostly CCR5). A homogeneous 32 base pair deletion in the CCR5 gene protects from HIV infection by eradicating this co-receptor. The heterozygous presence of the mutation leads to delayed disease progression. In 2009 a patient was treated for acute myeloid leukemia and also had AIDS. His donor was homozygous for a CCR5 deletion. He had no detectable viral load 27 months after the transplant with the help of no antiviral drugs [3].

Current therapy for AIDS allows people to live for 2/3 of the life expectancy of the rest of the population. There are side effects associated with these treatments, they are expensive, they have led to resistant strains, and some people still progress to AIDS. Bone marrow transplants could be the ideal treatment for some patients. Mostly Caucasians have the homogeneous mutation, 1-3%, and it is most prevalent in the NE parts of Europe. Current registries offer a theoretical 30% chance of finding a match with homogeneous mutant. As an added bonus this mutation also reduces GVHD [3]!

Injection of bone marrow into mice that would normally die from tyrosinemia without intervention had restored liver function and survived. (Tyrosinemia type 1 means that you totally lack the enzymes necessary to metabolize tyrosine which leads to liver and kidney failure) It was found that only hematopoietic stem cells gave rise to these changes. Upon the biopsy of these mice it was found that large sections of the liver had been taken over by donor cells that could properly proves tyrosine. Studies in humans have shown improved liver function in hepatitis C patients [5].

Irradiation to destroy cancer and subsequently bone marrow is the first step in the process [4]. The use of cyclophosphamide can be used instead of irradiation; it slows growth of cells and decreases immune response [6]. The transplant is then injected into the blood stream so that the cells can engraft into the bone [4].

The harvest is done under general anesthesia where 10 % of donors bone marrow is taken (about 2 pints) in 1-2 hours. The cells taken will be replaced in 4-6 weeks. The donor will be able to leave in a few hours or next morning. They will be sore and weak but are usually back to normal in 2-3 days. For the donors trouble the recipient’s insurance pays for the expenses [4].

Peripheral blood stem cell harvest is a several day process. For a few days before the procedure a shot is administered of filgrastim which causes the body to make and release stem cells into the blood. This can cause bone pain and headaches. Blood is taken out through a catheter in a large arm vein or chest vein and is put through a machine to separate out the stem cells. This takes 2-4 hours [4]. An allograft from peripheral blood has many T-cells and can have an increased instance of GVHD. The use of the drugs above helps this ratio. The process takes about 25 L in 4 hours [6].

The recipient of the bone marrow transplant will take anywhere from 2-6 weeks to return to a normal blood count. During this time they are very susceptible to infections and may be given antibiotics [4].

Cells are taken from the patient and then frozen. The patient is treated for their disease and then their bone marrow is transfused back into their bodies [4]. There is no risk of rejection but cancer cells may also be harvested. To combat this, the patient may have anticancer treatment first. Because there is no risk of rejection, there is no chance of GVHD, leading to an increase in reoccurrence because the cancer stem cells may not be killed. This type of transplant is more common these days because of decreased mortality and no GVHD, but the risk of relapse from possible contaminated cells and lack of GVHD may be greater than the benefit [6].

Cells are taken from another person whose tissue is closely matched. For allogeneic transplants from a bone marrow donor there is a high chance of GVHD and infection from the time when the patient is immune-compromised [4].

Cord blood may be used for children. The cells are free of cancer, have just enough GVHD, but they are more likely to be attacked and die before engraftment. This technique has been used by thousands of people but there are generally not enough stem cells for an adult patient. The match can be less exact, rich in cells but low in volume [6].

When someone is too sick to wipe out their immune system they do it just enough treatment to kill some of the cancer, bone marrow, and immune system to allow for a donation. The new cells slowly take over hosts cells. This technique is not good for people with tons of cancer cells [4].

2% of people will die from autologous transplants, <10% from allogeneic, and 40% from advanced cancer patients [6].

GVHD is prevented through the use of methotrexate which is also used to help with arthritis, it blocks enzymes involved in the immune system. GVHD decreases the chance of relapse because the new immune cells attack the cancer cells [6].

1. Parapia, L. A. (2007). Trepanning or trephines: a history of bone marrow biopsy. British Journal of Haematology.

3. Hutter, G. (2009). Transplantation of selected or transgenic blood stem cells – a future treatment for hiv/aids?.Journal of the International AIDS Society.