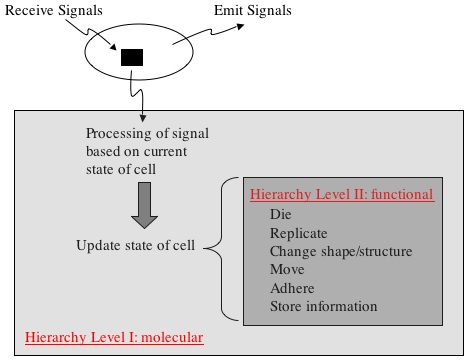 One salient difference between amorphous computing and bio-cellular computing is that biology has devised an elegant hierarchical differentiation scheme to allow specialization and sub-specialization of cell types to distribute functions to a non-homogenous group of agents. Ultimately we want to meld differentiation into an amorphous-like computing system to utilize the power of hierarchical organization an heterogeneous populations.

A key component in the process of differentiation in biology is the idea I call a decision network. The purpose of a decision network is to perform a computation between communicating cells to determine the fates of the cells involved. A simple example of a decision network is the Delta-Notch ligand/receptor system found in nearly all organisms that performs a lateral inhibition role to prevent all cells within a local environment from differentiating into the same cell type. It is essentially a competition network where one cell wins and then subsequently inhibits the losers. Another decision network example is found in Dictyostelium prespore/prestalk (Psp/Pst) cell differentiation which is composed of a small negative feedback network acting as a homeostat that robustly produces a particular ratio of Psp/Pst cells (~75/25) within a given colony.

The utilization and understanding of decision networks are going to be a key interface in ultimately programming cellular differentiation within colonies of similar cells.

I argue that once a cell has made a decision what fate to take on, it wastes no time to act on that decision. For example, it is generally excepted that once a cell has decided it will commit suicide it will enter a fixed-action pattern (term stolen from behavioral neuroscience) to follow through to completion. What good is a half dead cell? Furthermore in Dictyostelium, once the cells have decided they will enter the social phase of their life, they immediately switch over to a new gene expression state (~25% of gene expression is modulated). This gene expression modulation occurs many times as the cells proceed with different morphogenetic transformations through development, but maintain a relatively stable gene expression pattern while no morphogenetic transformations are occurring. If it is true that significant state transitions occur in a crisp, decisive manner then it gives hope that genetic programming may be possible through the interaction of small decision networks and more global gene expression modules.

If you haven't noticed yet, I have absolutely no idea what I'm talking about and encourage any input/comments via email to: millard@mit.edu

Some Principles of Developmental Biology