Bioreactors for Tissue Engineering, by Varun Chalupadi and Anthony Sanford

Bioreactors are defined as a device used to develop biological processes by closely monitoring controlled environments [1]. They are used within the field of tissue engineering as a method for studying and mimicking traditional in vitro studies in an in vivo environment for the growth of tissue substitutes [2]. Typically, bioreactors are used in the scale up process in transferring from bench-scale lab experiments to large-scale production schemes.

Bioreactors are developing solutions to common problems associated with non-bioreactor implemented solutions. Most notably, effective transfer of nutrient supply to the cell culture is one of the major concerns addressed using a bioreactor. Additionally, the bioreactor provides a well-defined culture condition than in vivo tissue generation as multiple parameters can be controlled [2].

There are some parameters that must be controlled and appropriately adjusted in order to maintain controlled, reproducible experiments. The parameters are:

These parameters are crucial to maintain in a properly engineered bioreactor. Specifically, mass transport and diffusion limitation problems related to oxygen transport have “severely curtailed efforts to engineer tissues that normally have high vascularity and/or cellularity”[2].

The spinner flask is a basic bioreactor widely used in initial cell expansion and provides a cheap way to culture cells[1].

A Spinner flask is a basic form of a tissue-engineered bioreactor that is ideal for cultures cultivated under static conditions. An advantage of the spinner flask design is it maintains a well-mixed environment within the flask, which therefore reduces the stagnant layer of cells what would form in a poorly mixed environment. Conversely, spinner flasks are not always ideal since the constant mixing motion causes turbulent flow within the capsule and the associated high shear stress causes the formation of an outer fibrous capsule in the cartilaginous tissue.

Spinner flasks have been modified (2004) since the original design to reduce the turbulent flow. Current designs called wavy-walled bioreactors induce small waves in the mixing instead of the rough, turbulent flow induced from traditional spinner flasks.

Spinner flasks are intended for small scale production and do not appear to be used as much as other types. They are primarily used for the seeding of cells in 3D scaffolds until they are ready for more large-scale cell culture procedures [1]. 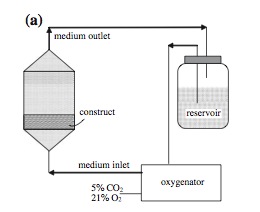 The perfusion bioreactor is known for its ability to constantly replenish the cells with media and oxygen to provide a nutrient rich desired environment [2].

The perfusion system offers an alternative to the spinner flask technology as it combats the problems related to the static culture conditions. Typically, static media does not provide optimal cell growth and thus deters the cell’s ability to migrate into the scaffold. This results in a shell formation of cells on the exterior of the scaffold instead of a desired uniform distribution [2]. Perfusion systems constantly replenish the cells with fresh media with the use of chambers, columns, or cartridges that house the scaffold constructs [2]. The constant replenishment of media enhance nutrient delivery to the cells and help the cells to better differentiate. One of the proposed disadvantages of the perfusion system is the constant flow of media causes the cells to line up parallel to the scaffold lining while in certain systems, it would be preferred to orient the cells perpendicularly, such as articular cartilage [2].

A company called Tissue Genesis has created a special kind of perfusion system bioreactor called the Bio-Optimized System (BOS). This system employs the use of sensors, actuators, pumps, disposable chambers, and a perfusion system to cultivate vascular grafts and connective tissues with high efficacy due to the use of feedback-controlled hardware [2]. Perfusion systems are also used in the pharmaceutical industry to generate genetic therapies that use cell cultures for protein and enzyme replacement therapies. 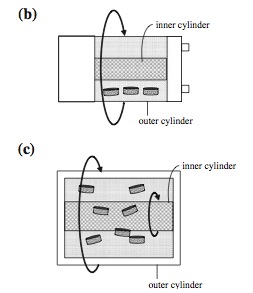 One of the challenges in designing an ideal bioreactor is reduction of shear stress within the capsule. The rotating wall vessel (RWV) is the most commonly used bioreactor that reduces shear stress since the cells are grown in a microgravity environment [2]. The RWV was originally invented by NASA and currently has several derivatives of the original design that are implemented today. There are three common derivatives called the slow lateral turning vessel (STLV), the high aspect ratio vessel (HARV) and rotating wall perfused vessel (RWPV) [2]. The STLV is currently available for commercial production.

The rotating wall structures provide a reduced shear stress while maximizing mass transfer due to the microgravity environment generated by the rotation of the inner and outer cylinders [1]. The rotation establishes a equilibrium of all three dynamic forces involved [2]. The major disadvantage to the RWV design is that the cell growth is not always uniform. Due to the rotating action of the cylinders, the scaffolds within the capsule tend to bounce off of the reactor wall causing cell damage along the outside edges of the scaffolds [2]. Newer techniques have found ways of alleviating this problem by using lighter scaffolds which do not bounce off the reactor walls as hard [2].

Why Bioreactors are Necessary for Tissue Engineering

Histological sections of tissue engineered vascular tissue cultured using a bioreactor (on left) and cultured in static condition (on right) [3].

Homogeneous cell distribution can be achieved in the scaffold by using a bioreactor. Enhancing fluid transport is essential for proper viability throughout the scaffold. Cells also require mechanical stimulation and bioreactors can be used to apply the necessary stimulation to promote ideal growth. This can encourage increase the rate of ECM production and result in a more homogeneous distribution than would be the case with static culture. For example, in comparisons between ECM protein levels after 5 weeks in culture, scaffolds cultured under hydrodynamic conditions showed signiﬁcant improvements over scaffolds cultured in static medium [3].

A study by Martin et al was performed to test the hydrodynamic conditions obtained from different bioreactor conditions for cartilage tissues after sitting in culture for six weeks. They were able to test two different conditions to test for the production of glycosaminoglycan (GAG) [1].

The initial control was a static culture construct. In the first illustration, it is evident that GAG was able to be produced in the outer regions but do appear in the central regions of the tissue [1]. The first test was to use the spinner flasks for the tissue culture. In this culture it is evident that the media mixing allows for better production of GAG through the central areas of the tissue. It is clear that there is a more level distribution of the GAG production in the cartilage tissue cells. The second test was the implementation of a RWV bioreactor. In this test, it is evident that the lack of shear stress and better mixing at equilibrium generated a much more intense GAG concentration throughout the tissue sample [1].

It is evident form this test that the use of bioreactors provides a better cellular environment for the cells to survive and produce the appropriate GAG protein. The comparison of the spinner flask and RWV system clearly illustrates that a perfused RWV system is much better than due to the low shear stress and better media uptake. 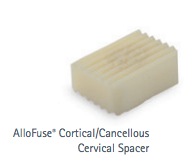 A sample spinal graft from AlloSource [4]. 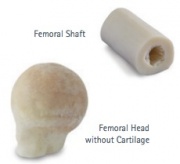 A sample femoral graft from AlloSource [4].

Artificial skin is one of the well-known tissue engineered products created with the use of bioreactors. TransCyte and Dermagraft are two artificial skin products that employ the use of a modified perfusion system to culture the cells. TransCyte and Dermagraft are dermal tissue replacement solutions developed for use in diabetic foot ulcers and [5]. Dermagraft is produced using roller bottle technology in which the cells adhere to the bottle surface during the initial expansion phase [6]. During this phase, up to 100 roller bottles can be used over five weeks for the expansion. Then manifolds with the graft are constructed and the cells and fresh media are constantly replenished over the scaffold until it is seeded with a high concentration of cells [6].

The following link from the Dermagraft website has a nice video of the manufacturing and scientific background of the product: http://www.dermagraft.com/about/product-videos/

AlloSource is a company currently producing allografts or bone graft for damaged bone tissue. A study performed by Zhang et al illustrated that the RWV bioreactor was the only type of bioreactor that was successfully able to produce bone grafts from mesenchymal stem cells [7]. AlloSource holds one of the largest tissue banks in the United States and they are responsible for creating safe bone and soft tissue replacements throughout the body. Their products range in allografts for all sections of the body. Some of the bone grafts they produce are shown in the pictures [4]. 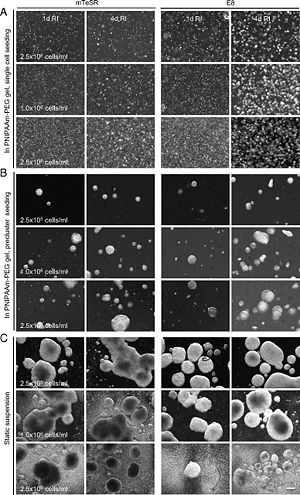 Human pluripotent stem cells (hPSCs) and induced pluripotent stem cells (iPSCs) have the capacities for indefinite expansion and differentiation into many cell types. They represent highly promising cell sources for several biomedical applications, including cell replacement therapy, tissue and organ replacement, and drug compound screens. However, these applications require large numbers of cells, 1010 hepatocytes or cardiomyocytes would be required for an artificial human liver or heart, respectively, and current methods of growth are unable to meet this demand. Additionally, far more cells are needed for application because both in vitro cell culture yields and in vivo survival of transplanted cells are quite low. As an example, only 1% of injected cardiomyocytes reportedly survive in rodent models several months after transplantation [10].

Lei et al. report an alternative system that expands and differentiates hPSCs within a thermoreversible hydrogel, composed of a polymeric solution that is liquid at low temperature but solidifies into an elastic hydrogel when warmed. Cells can thus be mixed with the liquid at low temperature, suspended and grown in a solid gel at 37°C, and harvested and passaged by reliquifying the gel at low temperature. The resulting hydrogel offers many features that benefit hPSC biology and culture, including a 3D environment for rapid cell growth, prevention of large cell aggregate formation, isolation of cells from shear forces, and sufficient porosity for nutrient diffusion [10].

The Future of the Bioreactor

As bioreactor technology develops into a much more prolific technology, researchers aim to improve the power behind single bioreactor systems. The following diagram is a rendition of what the bioreactor of the future would look like. 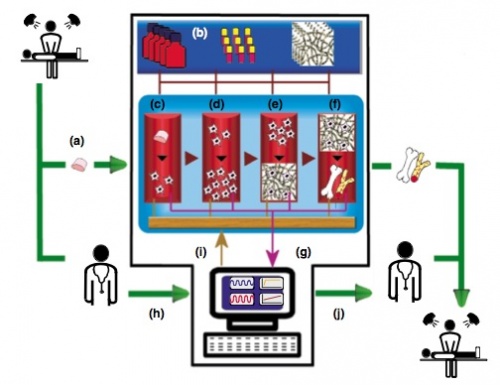 The future vision of bioreactor technology is an all encompassing closed bioreactor system in which the surgeon can go from biopsy to implantable graft with one "bioreactor" [1].

The central idea is to make an all-encompassing “bioreactor” that can be available onsite for the surgeons to have access to. The idea behind this “bioreactor” is to allow the surgeon to perform a biopsy and inject the sample into the reactor. The media and nutrient supplies should be held on board or fed directly into the bioreactor. This all-encompassing system will have the ability to automatically isolate and expand the cells and seed them on a scaffold. Additionally, the system will be able to produce a graft and perform all required tests on the newly engineered device to output a device ready for implantation [1].

This closed system design is the vision for the next generation bioreactors and would eliminate the need for large GMP facilities by minimizing handling time and therefore minimizing contamination. Currently the costs associated with this design is simply too expensive to implement.