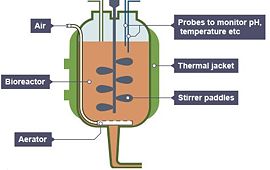 Figure 1. Schematic of an industrial bioreactor with impeller system for mixing [3]

Bioreactors, in their most basic form, are vessels in which cells are cultured and developed for purposes such as fermentation, protein production, and tissue engineering. They range in size from one liter, for research purposes, to several thousand liters in an industrial setting. Chemostats (continuously stirred bioreactors), as seen in Figure 1, batch and semi-batch processes are the three main types of bioreactors. Each of the three types of bioreactors can be categorized as a rotating-wall or fixed-wall reactor [1]. In 1949, the New Brunswick Shaker was the first bioreactor built in order to produce an antibiotic [2]. Since then, the bioreactor has been modified and improved several times over to provide conditions that would best suit a cell culture and the desired product. Examples of some modifications include improvements to controlling the pH and temperature of the reactor, aeration in the chamber, improved mixing methods, and the addition of a scaffold. Some of the more common bioreactor scaffolds are made of collagen, silicone, polyglycolic acid, and polylactic-glycolic acid [4]. Bioreactors have become increasingly more important over the years to the field of tissue engineering due to their potential to produce much needed replacement tissues. Cell cultures are seeded onto the scaffolds, fed media and other nutrients, and mechanically stimulated with the intention of growing a viable tissue culture that can one day be transplanted into a human. As the life expectancy for humans continues to increase, there will be a greater demand for replacement body parts to upkeep the standard of life that person is accustomed to. The United States spends over $10 billion per year on joint replacements and $1 billion per day on heart disease, the leading cause of death of adults [5,6]. The main goal for this developing technology is to produce an easily transplanted, viable tissue which with minimal cost and bodily rejection. The potential economic market for engineered tissue, and the potential benefits reaped by patients are enormous and virtually untapped. 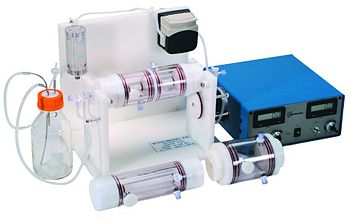 The environment provided in a bioreactor is essential to successfully upholding a viable and profitable cell culture. Mechanical stresses produced in a reactor are particularly important to 3D tissue growth. The two classes of bioreactors, fixed-wall and rotating wall, each deliver specific conditions to a cell culture. As the name indicates, a fixed-wall bioreactor is motionless and affixed to a wall; it is better suited for rigid tissues and flows media directly through the forming tissues [1]. This design allows shear stress to be applied on cells by changing the pressure in the membrane-separated chambers inside the bioreactor. One of the most effective types of fixed-wall bioreactors is the perfusion reactor. The perfusion reactor contains a chamber containing a scaffold with the desired tissue. Media is flowed, perpendicularly to the scaffold, through the chamber applying shear force and mechanical stimulation to the cell seeded scaffold [1]. Additional benefits from perfusion are stable oxygen levels, and increased cellular maintenance. The perfusion reactor is especially useful in tissue engineering because it can be modified, by adding an additional chamber, to create two different tissue layers [1]. This is achieved by separately flowing media suited to producing two different types of cells through each chamber. The fixed-wall reactor is best suited to applying hydrostatic, shear, and compression forces to a culture to create a stiff tissue such as collagen or bone [1].

In comparison to the fixed-wall bioreactor and its applications for more rigid tissues, rotating-wall bioreactors, seen in Figure 3, are better suited for fragile tissue cultures. The continuous rotation of the reactor induces a zero gravity suspended culture state which reduces the amount of mechanical stress experienced by a tissue culture and promotes uniform cellular interactions and growth [1,7]. It was originally designed by NASA engineers to study the effect of zero gravity on cells and microorganisms. Limiting mechanical stresses and strains helps prevent the formation of cracks and breaks in the developing tissue. The rotating-wall bioreactor can produce laminar or turbulent flow, depending on the needs of the tissue culture [1]. 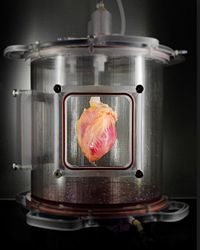 Cells associated with different parts of the body have different mechanical and chemical properties. For example, heart cells have different properties than cartilage cells. For example, applying different stresses to stem cells determines if it becomes a cardiomyocyte or osteoblast. Oxygen and nutrients are often solely provided through the media and aeration because most tissue scaffolds are not vascularized when they are placed in the reactor chamber. Three polymers, actin filaments, microtubules and intermediate filaments, are responsible for cytoskeletal movement, stiffness and flexibility [8]. Mechanical stresses applied to cells affect the frequency and concentration of the aforementioned polymers, and therefore affects the physical capabilities of the cell.

Heart tissue is among the densest in the body, and it one of the few organs that cannot repair itself. As a result, there is a high demand for heart (tissue) replacements. However, it is difficult to acquire a healthy heart that is a biological match to the donor. Engineering viable cardiac tissue presents an opportunity to meet the demand of patients. The heart undergoes continuous contractions and electrical currents through its lifetime presenting a challenge to those who wish to replicate its properties in a tissue culture. A recently published paper studied the effects of in vitro simultaneous mechanical and electrical stress on cardiomyocytes. Mechanical stress was supplied in the form of continuous static stress, and electrical stress through current stimulation at a 5 ms pulse. They reported increased cellular alignment, cardiomyocyte hypertrophy and increased passive stiffness of the tissue. Their findings suggest cardiac tissue should be cultured with both electrical mechanical stimuli in order to grow better quality heart tissue[9,10]. Another study attempted to directly seed a decellularized heart in a custom perfusion bioreactor with cardiomyocytes derived from induced pluripotent stem cells, seen in Figure 3. Mechanical stimulation was applied by changing the vessel's internal pressure. This study was able to partially regenerate cardiac tissue that was both electrically and mechanically active after a two week culture period [9]. Currently, rotating-wall bioreactors provide conditions that optimize cardiomyocyte growth. The low levels of shear stressed experienced by the cells in this evironment is cruicial to the development of cardiac tissue, as the cardiomyocytes can be harmed by shear stresses of 0.1 Pa. Laminar flow, but not turbulent flow, can provide a shear stress of 0.001 Pa, which is the preferred stress condition by these cells [1]. Fixed-wall bioreactors and rotating-wall bioreactors both create laminar flow, however the former can also create turbulent conditions through agitation as well [1,]. The exception to the undesirable turbulent conditions in a fixed-wall reactor is the perfusion reactor. Direct perfusion in a reactor better distributes cells along the scaffold, creating a more uniform and stronger tissue [1,]. 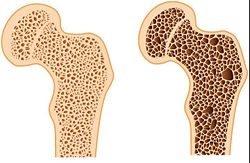 Figure 4. Artist rendition of a healthy bone (left) versus a bone with osteoporosis (right)[11]

Cartilage is a very durable and flexible composite of chondrocytes and extracellular matrix (ECM). Cartilage is rarely repaired by the body, creating a need for either mechanical and tissue replacements in the knee and other joints. In a bioreactor, cartilage tissue formation is induced through perfusion and mechanical stresses. The perfusion bioreactor simultaneously provides the necessary mechanical stresses, delivers essential nutrients and upholds a uniform pH [1,12]. It was found that the continuous mechanical stresses, such as the shear force from the flow of liquid and scaffold stretching, fortifies the ECM, synthesizing a higher quality cartilage tissue. A lack of mechanical stress causes improper formation of the ECM and structural deformation [1,12]. Additionally, applying smaller stresses to the scaffold increased ECM quality and growth, suggesting that the cells better respond to a series of repeated, smaller stresses, which gradually increases their strength [1]. The use of perfusion also assists with uniform and increased tissue formation and cell differentiation. Rotating-wall reactors are beneficial for cell proliferation but fall short in supplying sufficient mechanical stress for proper ECM formation and chondrocyte integration. Collagen and other soft materials are commonly used as scaffolds for cartilage [4].

Bone tissue regeneration in a culture is difficult due to the physical differences in the hard outer and soft inner layers of the bone. The ability to create new bone would greatly help those affected with degenerative bone diseases such as rickets or osteoporosis. The three types of cells which synthesize, maintain and breakdown bone are osteoblasts, osteocytes and osteoblasts, respectively [1,12]. Often, mesenchymal cells are differentiated to pre-osteoblasts, and cells scaffolds are seeded with the osteoblasts. Cultivation of bone tissue requires similar conditions to that of cartilage, wherein significant shear pressure and mechanical stress is required to formulate the bone tissue structure [1]. Laminar flow provides the optimal shear conditions in both bone and cartilage tissue cultures. Mechanical stress, approximately a 1 Hz mechanical loading and 10,000 microstrain (1% strain), has been shown to induce osteoblast proliferation. It was also found that cycle stretching of the tissue scaffold is also associated with higher cell proliferation rates [13]. Bone tissue engineering requires a stiffer scaffold such as a ceramic or stiff polymer as opposed to softer scaffolds used for cartilage. Heart and cartilage tissue can be cultivated on a 2-dimensional or 3-dimensional scaffold, in contrast bone tissue proliferates in a more effective manner on a 3-dimensional scaffold in a bioreactor setting [4,13].

There is still much research to be done before the entirety of the human body becomes available through tissue engineering. Optimization parameters, especially for bone engineering, are not yet known and present a barrier in effectively producing tissue. Another area of research is creating a new organ from one’s own stems cells. However, there is minimal research on the ability of the final engineered product to survive once removed from the optimal reactor conditions. For example, a reoccurring problem experienced by patients is that their tissue transplants do not survive once implanted in the body. It is currently unknown why this happens, although it is suspected that the sudden introduction to an extremely vascularized environment with not properly vascularized tissue could be the cause. As such, it is imperative that more research and testing be completed before the entire process becomes commercialized.