Nowadays, nanotechnology has brought a variety of new possibilities into biological discovery and clinical practice. In particular, nano-scaled carriers have revolutionalized drug delivery, allowing for therapeutic agents to be selectively targeted on an organ, tissue and cell specific level, also minimizing exposure of healthy tissue to drugs. On the other hand, the quest for early detection and treatment of diseases has led to intense research on theranostics, which combined diagnosis and therapy onto a single platform.


As an improved approach, our team has explored the possibility of design and preparation of a a origami-based theranostic agent, to improve the specificity of anticancer drugs. We use self-Assembly DNA origami as a carrier. Built on the scaffold of the origami, we call for the conjugation with folic acid (a widely employed targeting agent for cancer cells), chlorambucil (an anticancer drug for chemotherapic action) and graphene quantum dot (a biocompatible fluorescent imaging agent), developing a functionalized DNA origami.


The fabricated “origami cargo”, takes advantage of the high capacity of nanoplatforms to ferry cargo and loads onto them both imaging and therapeutic functions. The resulting nanosystems, capable of diagnosis, drug delivery and monitoring of therapeutic response, are expected to play a significant role in the dawning era of personalized medicine. 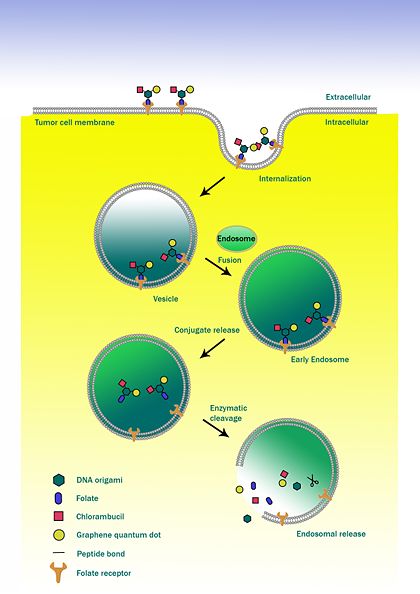 In our design, there will be a DNA origami acting as a common carrier for FOLIC ACID , nano-carbon dots and anticancer drug, in order to bring the materials to their destinated region of action. Our design of DNA origami consists of 6 oligonucleotides, they will form complimentary pairings with each other and eventually folded into a hexagonal cylinder-like structure.


Among the chains of nucleotides, there are three oligonucleotides undergone modification and have amine groups on their 5'end. Since there is the presence of carboxyl groups on the folic acid, carbon dots and chlorambucil, they will react with the modified oligonucleotides and conjugates. After the conjugation process and the self assembly of the DNA strands, a DNA macromolecule, consisting of a DNA framework, a nano-carbon dot, a folic acid and an anticancer drug is formed.

Graphene quantum dot is a carbon materials which is nanometer-sized object where the excitons are confined in all three spatial dimensions. GQDs have diameters below 20nm. It is a graphene fragments that are small enough to cause excitons confine in a quantum size effect. The popularity of GQDs are due to a unique physical and chemical properties such as high electrical conductivity, high surface area, good resistance to corrosion high thermal stability, high chemical stability in non-oxidizing environments and particular mechanical properties. GQDs are abundant available with low toxicity, high soluble in various solvents and can be equipped with functional groups at their edges, making it superior compared to inorganic semiconductor QDs. However, research on GQDs is still in an early stage and the full potential has not yet been unraveled.

For our project, we focus on the bio-imaging properties of GQDs. GQDs is successful in the field of biotechnology due to their excellent optical properties and extreme low cytotoxicity. Reports have revealed that significant weakening in cell activity on addition of up to 400µg of GQDs to 150µL of culture medium. (104 cells). The ability of the GQDs to penetrate the cell nucleus makes them promising for applications in drug delivery systems and as gene carriers. GQDs are easily to penetrate tumor cells (human lung cancer, A549) and human breast cells (MCF-7) with little cytotoxicity. GQDs can be used in biological imaging and drug delivery, as their ability to penetrate cancer cells and stems cells, which allow a wide range of applications like C60 nanoparticles. It has been proved to have long fluorescence lifetimes and good stability against photo-bleaching.

GQDs represent an exciting future for carbon materials, and for the future of environmentally benign devices. The versatile chemistry of the carbon element of GQDs makes that new carbon forms with new applications are being developed in spite of the fact that a wide knowledge base is already available.

Chlorambucil is a bifunctional alkylating chemotherapeutic agent of the mustardgas type [2], clinically used as treatment for Chronic Lymphatic Leukemia (CLL), and advanced ovarian and breast carcinomas. CLB has been used for 50 years, and still used as the first –line treatment against CLL, especially for those patients aged older than 65.[3-4]

Reports suggested the NMs are transported into the cell by passive diffusion, together with the help of carrier-mediated systems in a dose-dependent way.[5-6] The NMs were shown to cause alkylation of DNA, RNA, and proteins. NMs covalently cross-link DNA via a sequence of aziridinium ion formation, and later alkylation. The formation of the interstrand cross-links results in seizure of the replication fork, leading to the shutdown of replication. Due to the lack of selectivity of cytotoxic drug, it cannot accurately discriminate the between healthy and malignant cells, leading to systemic toxicity and side effects.


Side effects including:
Hematologic: Most common side effects include bone marrow depression, anemia, leukopenia, neutropenia, thrombocytopenia, or pancytopenia. Bone marrow depression due to the use of Chlorambucil is usually reversible if the withdrawn is early enough.[7]
Gastrointestinal: Gastrointestinal disturbance such as nausea and vomiting, diarrhea, and oral ulceration occurs infrequently.
CNS: Tremors, muscular twitching, myclonia, confusion, agitation, ataxia, flaccid paresis, and hallucinations have been reported rare adverse experiences, and resolves after discontinuation of the drug. 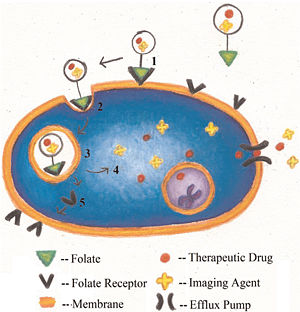 Receptor-mediated endocytosis of a drug conjugated to folate.[16]

There are many specific morphological and physiological differences between healthy and malignant cell tissues. Since the malignant cells undergo rapid cell division, they have high demand for the vitamins nutrients. Therefore, those receptors involved in the uptake of the essential vitamins for cell growth are often overexpressed on the surface of the malignant cells. Among such receptors, folate receptors (FR) have been recognized as excellent biomarkers for targeted drug delivery into the cancer cells.[9-11]

The applications of folate targeting for delivery of macromolecule can be classified as two categories; one type requires intracellular release for cytotoxic function, while another type mediates their functions on the surface of the target cells. The feasibility of folate incorporation with protein toxins, drug- encapsulating liposomes, oligonucleotides, gene therapy vectors and other macromolecular drug has been currently investigated. [15]