Molecular self-assembly enables the bottom-up construction of functional and biocompatible nanocarrier systems for the signal-responsive release of pharmaceuticals inside the cell. Eukaryotic cells selectively transport molecules from the extracellular matrix via endocytosis into the intracellular endosome, which contains an acidic interior with a pH-value of roughly 6. Aiming at an endocytotoic uptake, we designed a drug delivery container based on the DNA origami method that uses a decrease of the pH value of the surrounding media as a trigger for the opening mechanism of the container. Our DNA container consists of two identical half cylinders that form a closed homo-dimeric cylinder when connected by pH sensitive DNA duplexes. For each connecting duplex, one of the single strands contains four cytosine triplets that form the i-motif at low pH values. In our experiments, we were able to demonstrate the pH-sensitive separation of the two container halves.

Cells absorb molecules using a process called endocytosis. The cell membrane coats the molecule and forms a vesicle. This vesicle (endosome) is transported into the cell. During this process the pH value in the vesicle is lowered.

If we want to transport drugs into the cell, we can use this change in pH to trigger the release of the drugs.

We decided to design a drug delivery system containing

a container build with DNA origami

a opening mechanism based on pH change

The goals for the summer

The container consists of two identical cylinders, which are connected by complementary DNA strands. The whole container is roughly 160 nm long and has a diameter of 20 nm. 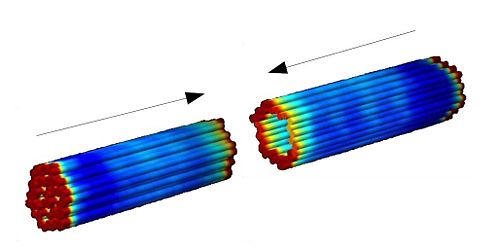 If we lower the pH around the construct all strands with the i-motif form a quadruplex and the two cylinders are no longer connected.

At low pH the red strands form a quadruplex.

To prove that the container could be loaded, we used single stranded DNA with a Cy5 dye at one end as payload. We came up with two loading methods: