Protein molecules with multiple binding sites play a fundamental role in regulation of a large number of ferments, ion channels and other cellular components. Mathematical modelling of multisite protein-ligand interactions which should be based on realistic assumptions is very important for understanding complex biological networks. 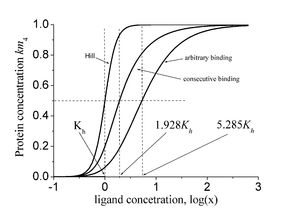 The dose-response curves are shown for a protein with four binding sites using following kinetic schemes: a) the Hill equation; b) the consecutive binding; c) the independent binding. The same values have been used for all three models.

Frequently the experimental dose–response curves for multisite protein interactions with ligand are analysed using the Hill equation [Hill, 1910]. Although the Hill equation is widely used in biological pathways modelling as well as in pharmacodynamic studies [Aviles et al., 2000], it is derived based on a physically unrealistic assumption according to which all ligand molecules simultaneously bind to a protein. In effect, this assumption is only valid in the case of extreme positive cooperativity.

We developed models for physically realistic consecutive and independent binding schemes and compared them with the Hill equation (Figure 1). It follows from this comparison that the “half-effect” concentration may significantly differ from the conventional Hill equation depending on the binding mechanism.

We used our models to rigorously investigate mechanisms for second messenger activation by multisite proteins. We show that differential and selective activation of different targets by the same protein-ligand complex (Ca2+ and calmodulin, for example) can be achieved by biologically active non-saturated intermediate multisite protein-ligand complexes.