A Response Model of P53 Gene Networks under Ion Radiation

Some mathematical models of p53 damage response networks have been proposed to present and predict the dynamics of single cell in response to DNA damage. Due to the complicated regulations under constant ion radiation(IR), the response mechanisms in fighting against acute perturbations at signal cell level need to be disclosed further .

Base on existing scientific basis and recent experiments, we propose a response model of p53 gene networks under constant IR. By using mathematical methods and stochastic techniques, we implement the modules of double-strand breaks (DSBs)generation and repair process, activation of ataxia telangiectasia mutated (ATM), and p53-Mdm2 feedback loop under constant IR.

We present the stochastic trace of DSBs generation and repair process, switch-like ATM activation, and oscillatory kinetics of p53-MDM2 in response to aute IR dose. Especially,we can predict the kinetics under perturbations on vital gene components, such as abnormal basal transduction of p53,MDM2, and repair proteins etc.

Fig.1. The kinetics of p53-MDM2 feedback loop module under continuous IR. Under regulations of ATM*(red), the oscillations of p53 (blue), and Mdm2 (green) stimulated by IR. 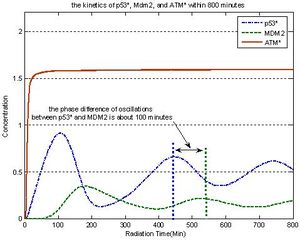 We provide a mathematical framework for the theoretical analysis of the response mechanisms of p53 stress response networks in response to constant IR. Due to the compleixity in real biosystem, our model is just a simplistic representation in response to perturbation of abnormal signals, and need to be improved by involving more aspects according to latest experiments.