Position dependent gene expression is a critical aspect of the behaviour of multi-cellular organisms and requires a complex series of interactions to occur between cell types. Cells adopt a particular fate in response to a combination of chemical signals. The development of body axes in multi-cellular organisms is a case in point illustrating the importance of cellular communication for developing complex patterns. Using Escherichia coli as a model system we have observed how differential cell motility can, in itself, lead to complex pattern formation (see Figure 1 for an example).

Adapting the experiments of Weiss et al. [1], we have studied the interactions between cell populations in swimming agar with genetically engineered sender and receiver cells. The sender cells express one of two acyl-homoserine lactone (AHL) synthases whereas the receiver cells are capable of responding to the generated homoserine lactone signal. Instead of using a differential response to AHL concentrations we employed cell motility as a way to define zones of response (see Figure 2 for an example). In particular we are equipping highly motile strains such as E. coli MC1000 with AHL-mediated autoinducing systems based on Vibrio fischeri luxI/luxR [2] and Pseudomonas aeruginosa lasI/lasR [3] cassettes to allow the amplification of a response to an AHL signal.

Exploiting the uncoupled nature of sender and receiver entities, both AHL systems can be combined to establish two-way communication pathways. The recursive behaviour of cells being both sender and receiver at the same time has the potential to create patterns that are robust and more complex in nature. In order to allow a detailed study of ensuing interactions at microscopic and macroscopic levels, two populations of Escherichia coli are endowed with the genetic circuits necessary for this reciprocal behaviour. Cell types 1 and 2 bear the genetic constructs depicted in Figures 3 and 4, respectively. We have modelled the behaviour of cells within populations containing these systems. 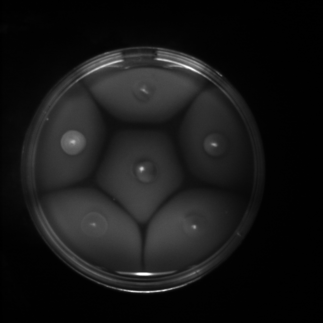 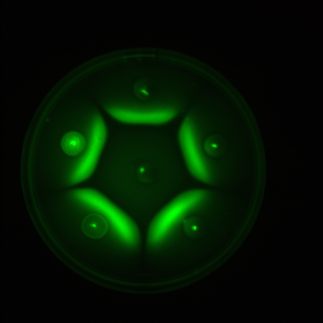 Figure 3. Genetic construct for LuxI/LuxR-based autoinduction with the capability to respond to 3-oxododecanoyl-homoserine lactone of LasI origin. Individual parts are were taken from the MIT Standard Registry of Biological Parts.

Figure 4. Genetic construct for LasI/LasR-based autoinduction with the capability to respond to 3-oxohexanoyl-homoserine lactone of LuxI origin. Individual parts are were taken from the MIT Standard Registry of Biological Parts.