yo sam, can you update these new keys in the registry? happy thanksgiving. thanks -bryan


Why won't the wiki show more than one space between the numbers even though thats how I'm formatting them? And why is the fluorescence of J01022 by itself so small? The mated and transformed values of J23077xJ23086 are close and look pretty good though.

MATING RESULTS
Conjugation experiments with J23077 or J01022 as the recipient
Number of Titer Colonies for EC100D::pir+ = 4

NOTE: pOX38xJ01064 did not grow so we are using old results which were 2880 colonies on TriK, and 1760 colonies on TriA with a 100x dilution, with a titer that gave 3 colonies. Undiluted - there were lawns. (this comes from the conjugation notebook) 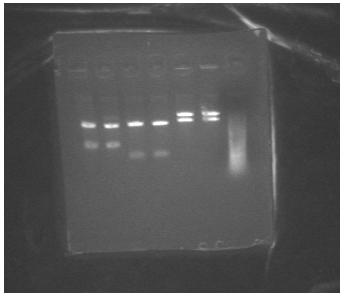 I ran Sam's gel of J23074 and J23075, but overran it. They all looked much better than when we transformed into TG1--all gave normal bands, no extra bands, all samples were mostly similar. Note that the correct sequences of things are: 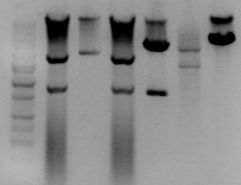 I remapped clone 1 of each and set up the EcoRI/SpeI digests to transfer things to pSB3C6 (above) The lanes go:

Conjugation:
Finishing up the traG and trbC complements