i performed some colony pcr on 4 colonies of each plate (j23039+J01003, T9002+J01003), using ca998 and G01001. I had to put those on ice for a few days, and ran a gel friday afternoon. The gel did not come out at all. There were a few bans of something, but even my ladder did not show. This was very fristrating. So, my first task today is making new ladder / dye. I may not be using my stuff often enough to leave my aliquots out at room temperature, so i will take care of this dye and ladder by keeping it dark and in the refrigerator. I am running a gel of just ladder, in an attempt to win a small battle and ain momentum again.

Generally, work since transitioning to the endy lab has been a struggle. I was not aware of the support structure I had at berkeley until i left.

dlk 09/17/06
I spent almost a week on a network design for unsupervised learning based off the concept of a self organizing map. It ended up very messy annnd it’s pretty much wrong, not gonnna post it. The key difficulty is that a self organizing map needs to be able to examine other nodes in the network and compare its output values to their output values, so it needs ‘comparison’ hardware.

I’m going back to the supervised learning network, as machinery wise it’s simpler, even if the ‘process’ is more complicated.

The key points I’m looking at:

Graded response – the claim is that the graded response can be achieved as an emergent property of the aggregate liquid culture, based on the concentration of specific cell types. This should be verified by the conjugation simulation.

Too many plasmids – both from the standpoint of the origin of replication and killing cells with too many plasmids stuffed inside, something needs to be done about the many plasmids problem. I think using prof arkin’s suggestion about deactivating cell surface proteins, the network design can be done in such a way that each cell needs to only produce a _single_ output key in the down stream direction, and a _single_ output ket in the upstream direction. (Essentially, adding in another layer of cells that do some mapping within the node, and the network diagram becomes more complicated, with lots of nodes doing many-to-one mappings)

So then, if there is a way to digest/cut open/ruin the plasmids that are passed into a cell, but don’t match one of the locks, then each cell only needs two distinct oriR’s, one for upstream, and one for downstream. Plasmids that enter the cell but don’t match the lock get destroyed inside the cell. I’ll venture down to lab this week and see if chris has any thoughts on ways to destroy plasmids.

i'm tired of opening my email clietn to read this:

dlk 09/07/06
A cool demo for the logic gates if we get two working locks and keys would be the following two NAND gates connected to an AND gate: 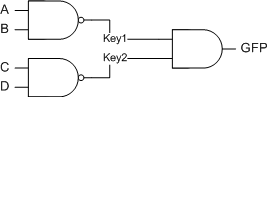 The inputs (A B C D) can be anything that we can control (small molecules, but then we'd need a second small molecule nand gate, so A and B would be the lux nand gate and C and D would be some other gate, or if we get that many locks and keys, just 4 lock keys) The output is GFP.

The output from this should be like the below truth table: 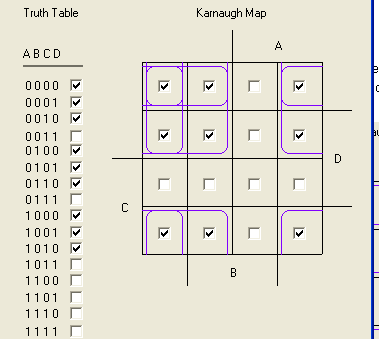 Which is the boolean expression !B!D + !B!C + !A!D + !A!C. ( (not B and not D) OR (not B and not C) OR (not a and not d) OR (not A and not C) ) This would be a swell example because we can likely get it to actually work, (2 specially designed NAND gates, one of which we've already got, and one lock/key AND gate) and it's a fairly complicated boolean expression that would be hard to do without logic gates. So using GFP as the output, it can be a convincing example that the lock keys can be chained together. Will, drop me a line, lemme know your thoughts.

dlk 08/28/06
I talked with prof narayan who suggested more thought go into the negitive/inhibition signals.

So I was thinking something like: either a + or a - key 'activates' the cell to start conjugation
PTet-lock(-)-Tra
PTet-lock(+)-Tra


Then some sort of competition between the + and - happens to determine 'which' oriT gets used.

In the learning step, there are two sub steps, each of which is repeated several times. In the first step, information flows from the input nodes down the network to the output/error nodes. Our network is a 'feed forward' network, meaning there are distinct layers with no communication between nodes in the same layer. Input and general nodes are connected to all of the nodes in a lower layer of the network. 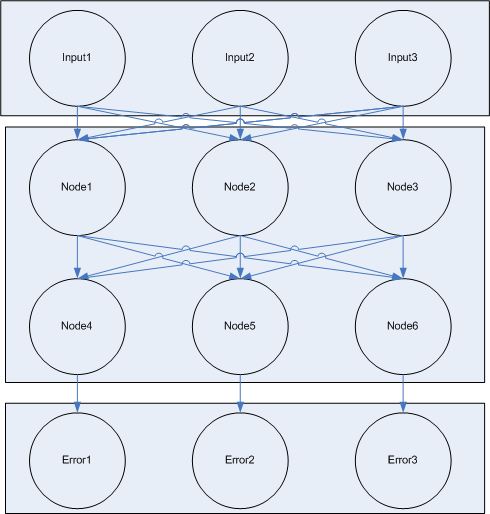 The the second step of learning, information about the error of the network flows from the error nodes backwards through the network modifying the weights of connections. This is loosely 'back propagation' learning from computer neural nets, but is missing a few key components, so it's not really 'backprop'. I need to figure out 1) what kind of 'learning this is 2) is it actually 'learning' or just 'changing weights'. Edit dlk_08/28/06 I think it can offically pass as backprop with the inhibition discussed in the 08/28/06 entry 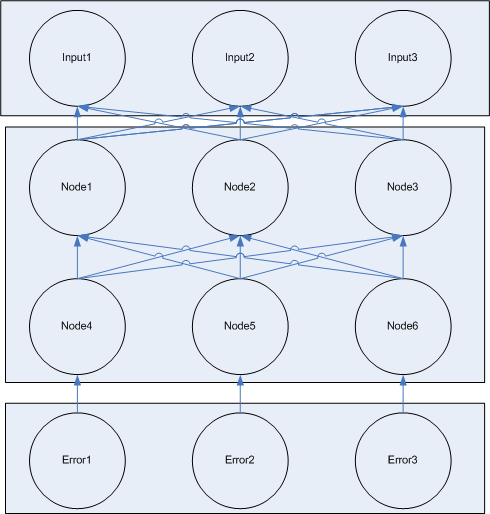 There are three distinct types of nodes in the network:

Each node is composed of one or more specific cell types. The cell types differ in the locks they contain and the keys they produce. Each connection between a node in the network corresponds to a unique lock and key pair.


The input node is composed of one cell type which either constitutively produces a single key or not. (Or this cell could just be absent) This key is passed to the output cells of the node. Each output cell receives the key and begins to produce a unique key which is passed to one of the next nodes in the network. This design allows for each output key each to be changed independent of the others by regulating the population level of the output cell for a specific link. 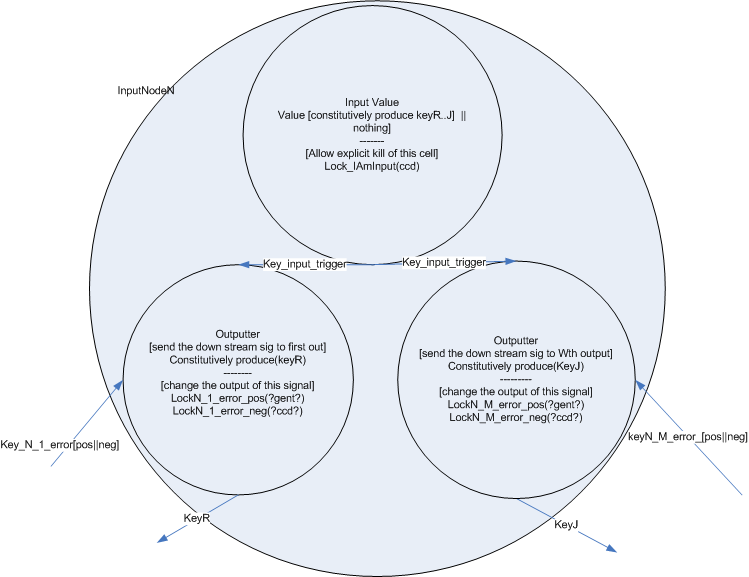 The input nodes connect to 'general nodes'. There may be multiple layers of general nodes. The general nodes are functionally the same as the input nodes, but instead of having a cell type which constitutively produces the input value, the general nodes sum their the input and produce a graded output response, the more input, the higher the output response. The output from the summation cell is a single key which is received by each out the output cells in the node. Each output cell in the node produces a unique key that corresponds to the summation cell in another node downstream.


The general node also contains additional locks for adjusting weights based on error signals. [finish explanation of how the error machinery works] 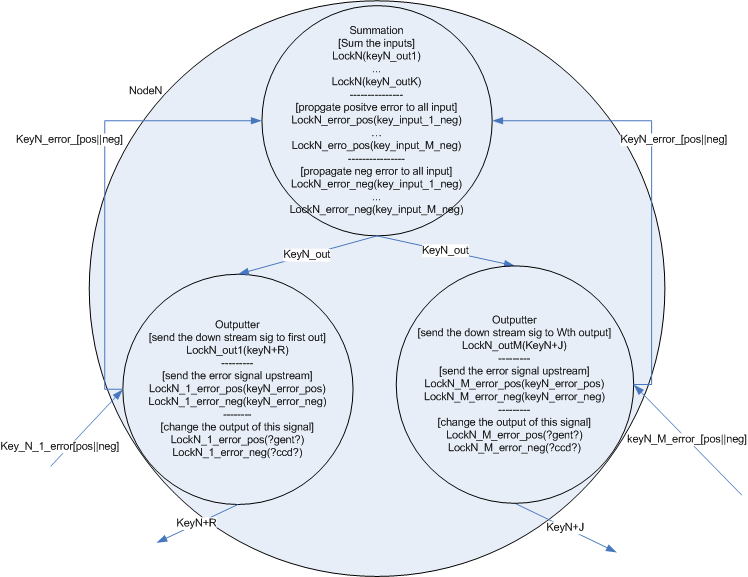 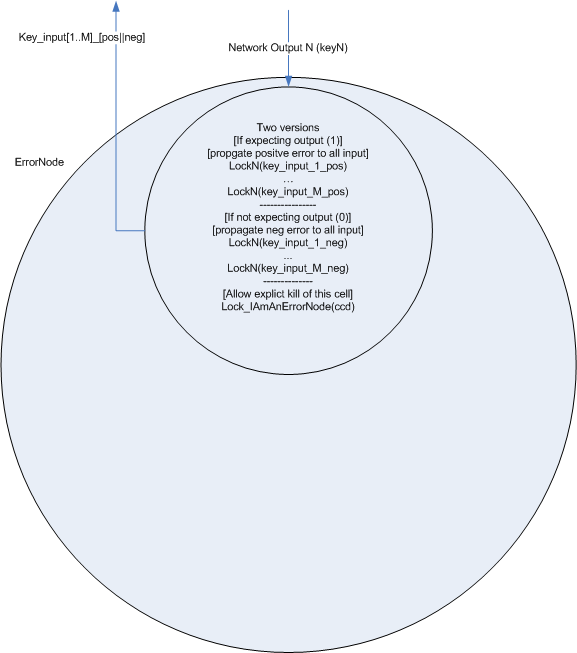 Chirs and John's comments:
look into something like the pir116 plasmid and the pi protein

Question of inhibition is still open, can learning be done without inhibition, what kind of learning is being done, is it useful/interesting


Use the keys to help design the layering approach

dlk 08/18/06 [[1]] claims that bacteria naturally do 'neural network' style learning via a variety of mechanims. 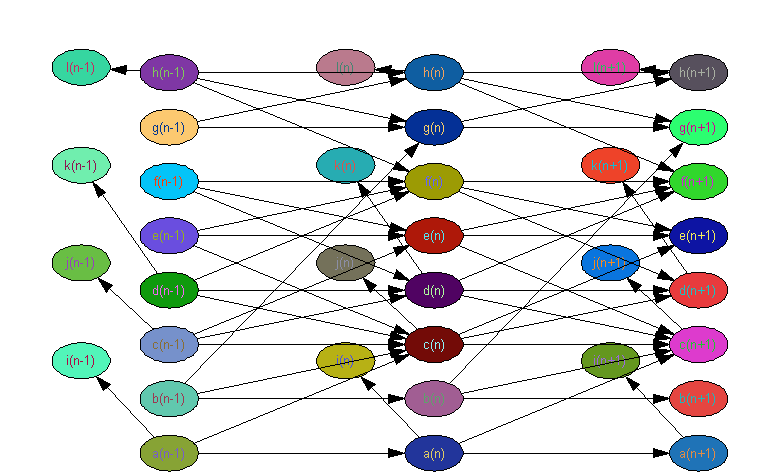 I'm using Ali Cemgil's dynamic belief net graphing package for matlab, which I'll turn into a movie, with each time step of the simulation being a frame in the animation. So the final output will be a network graph that evolves through time providing a visual representation of the information processing function that the cell culture is computing. I don't think open wetware will let me post MPEG files, so I'll stick them on one of my servers and link them here, but I'm not going to be generating those till I figure out the backprop addressing issue and the conjugation clumping issue.

a NAND logic gate. In the system suggested here cell1 and cell2 provide input signals. Cell3 processes these signals and provides an output. Cell1 and Cell2 communicate with Cell3 via conjugation. Cell1 and Cell2 will be R-type conjugating cells, Cell3 will be an F-type cell. The phenomona associated with the cell types can be better explained by the conjugation folks.

Cell2 will provide a ribosome containing a promoter/rbs::key::terminator. Cell3 will contain a ribosome with LacI-inversion-site::RFP::terminator

If Cell3 receives both Cell1 and Cell2 plasmids, output of Cell3-rfp will desist. Initial experiments should integrate a tag into successful transmission in order to assay and show hotness. Apparently, conjugation rates are fairly low (10-30%, with enough time), so conjugating 2 plasmids could see a 99% loss of signal. In order to decrease the apparent signal loss, it might be useful to tag cell-death onto cells that don’t receive plasmids. This is a tough riddle though, and for another time.

dlk 07/13/06
Addressable communication could be used to build graphical models. In the computer science sense, graphical models represent some decision making algorithm with 'nodes' and 'edges'. Bayesian networks are the canonical example of a graphical model, and a special case of a Bayesian network is the artificial neural network (ANN), which has achieved wide success in handwriting and voice recognition. If we can use addressable communication between cells to build an artificial neural network then we have the ability to use a lawn of bacterial cells to compute very non-trivial algorithms. An artificial neural network running in a lawn of cells would have very different characteristics than one implemented on a computer, including being probabilistic and massively parallel.

A simple type of ANN is organized into hierarchal layers with all data flowing in one direction. (A feed forward network) In this case, a node in layer one would be able to produce the locks which are opened by layer 2, layer 2 produces the locks opened by layer 3, and so on. In a 'recurrent' ANN, each node would be able to produce the locks of any other node in the network. Some internal logic in the cell would be used to determine when input levels are satisfied and what output to produce.

With two lock key pairs, it may be possible to compute the logic NAND function using an ANN framework.

How to build a NAND gate with addressable communication

We need to be able to build specific networks, determine the network topology, create a liquid culture mix of all the cell types, and grow. Expose to stimulus and the lawn should compute a function.

We need some way of determining HI and LOW from BACKGROUND 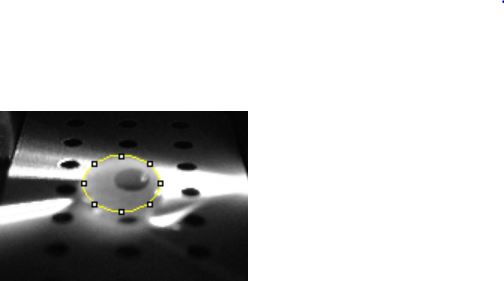