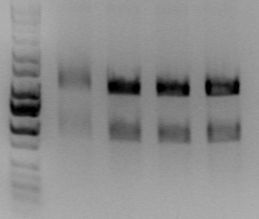 I mini-preped clones #1 and 2 of each

Yesterday, I streaked J23055 on an Amp plate and a Cam plate to make sure that it is AmpS and CamS. Nothing grew on the Amp plate, but there were colonies on the Cam plate (which means that J23055 is CamR).
Also, I mini-preped and PCRed J23015, J23055, and pox 38, I will run a gel tomorrow.
The Rlambda x pkD3 that Matt grew up yesterday didn't grow, so I am growing it up again. Hopefully it will turn out well tomorrow, so I can do the Dotsanko/Wanner procedure for TraGr KO tomorrow.
Matt ligated and transformed pSB3C6-J23065 on the off chance that it would grow white. Hopefully the colonies will be white, meaning that the plasmid was cut correctly.
Matt also did the Dotsanko/Wanner procedure for the OriT and trbC KO. He plated them on CAM because there was no KAN + CAM available. Tomorrow he will grow them up so he can conjugate them with EC100D::pir+.

The band is the correct size
Tomorrow we will do the Dotsanko/Wanner procedure using the PCR of PJL22 and the Rlambda x pkD46 culture.

pJL20 which was plated yesterday did not grow. I ran a gel of Rlambda digested with MfeI/BglII, but no bands showed. Therefore, I redid the PCR of Rlambda using oligos JL20&JL21.

Matt miniprepped the 1022 library promoters, made Tri and TriCamKan plates that will be used tomorrow, grew some overnight cultures, and helped bryan do some riboregulator stuff.

The Rlambda PCR with DMSO showed the correct band, so I digested it (using MfeI/BglII). Also, I did the ligation using pGLN as the backbone, transformed it and plated on Amp (new name= pJL20).
The sequencing for pSB1A2-J23038 failed probably because of the bad miniprep from the promoter that i digested anyway, so sam digested the new miniprep that she made last week, ligated and transformed again. This time the digest came out very nicely so it should work this time.
Also, sam conjugated J23015, J23016 and J23056 with EC100D using the conjugation protocol involving dilutions and plated them on TriK.
She also diluted J23055 and plated it on Kan at 42 degrees.
Matt grew up cultures of all the library promoters in order to miniprep them tomorrow. He also poured lots of Kan and Cam plates because we are out.

Sam transformed pCp20 into J23015 (poX38 OriTKO) plated it on CamAmp and is growing it at 30 degrees.
I did the PCR (fusion) of oligos JL20 & JL21 on Rlambda and RP4, but there were no bands when I mapped them. So I did a different PCR (expand) using the 4K45 program. I will map, digest,ligate and transform on Monday.

Today, Matt miniprepped the 4 clones of pSB1A3-J23028 which is [trbCf][TT].
Jen mapped the PCR products from yesterday of the pOX38 knockouts of OriTf and trbCf.
Here is the picture of the gel (lane 1=oriTf, lane 2= trbCf, lane3= ladder): 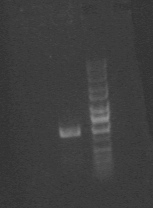 Only the trbCf KO came out well so I did a small scale electroporation prep on them and transformed pCp20 into them, plated on Amp and Cam and grew them up at 30 degrees. I also did a negative control for just the trbCf KO (J23016) by plating it on Amp before the transformation.
For the OriTf KO, Jen is doing another PCR with oligos 850R and OriTBB instead. And is mapping them.
File:JL080206-2.jpg
I picked colonies from the pSB1A2-J23038 part that I made yesterday which is a promoter plus a ribosome binding site. Unfortunately, Matt noticed today that the minipreps of the promoters may have been dirty because of a switch between PB buffer and PE buffer. This means that the A2 promoter miniprep that I used yesterday may have been dirty, which could explain the smeary gel. However, I cut a band from the gel anyway, so there is still a chance that of the 4 clones, one of them may be right, especially since there were white colonies and only a few red ones, which would indicate the parent vector. However, just in case, I am growing up a new saturated culture of A2 promoter to miniprep tomorrow just in case it doesn't work.
Matt ran an analytic digest and mapped the four [trbC][TT] (pSB1A3- J23028) cultures. Here is the picture of the gel: 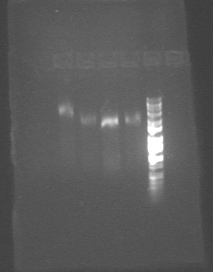 Today, I mini prep-ed, PCRed and mapped 10 clones of TraGr KO using the JL18&19 oligos. However, none of the clones had the correct band of 1462 bp. All of the bands were also blurry and ambiguous.
Also, Matt mini preped and PCRed the F plasmid KO of OriT and TrbC. We will map them tomorrow.
Sam made the part for J23038 [A2 promoter][RBS]. 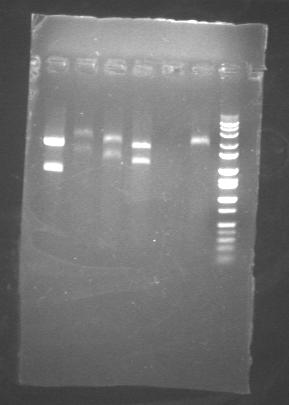 lane 4 is most likely the correct pSB1AKGO-J23036. lanes 5 and 6 came out pretty ambiguous which i think is the fault of the minipreps, so I miniprepped pSB1AKGO-J23027 clones 1 and 2 again and remapped them.
Picture of pSB1AKG0-J23027 digestion (lane 1= clone 1, lane 2= clone 2, lane 3=ladder)
File:SIL073106-2.jpg
The gel came out negative again for pSB1AKG0-J23027 because there is only one big band, which is unfortunate. However, the TraM complement with double terminator is not that critical because we are not really following the TraM path anymore so we are just going to forget about it.
I am also growing B0034 from -80 in order to miniprep it tomorrow and make a part with a promoter (A2) and RBS tomorrow.
I also added the double terminator to the trbC complement by ligation and transformation.
Also, Jen PCRed the oligos of the TraG KO 20mers and is growing up saturated cultures of the pOX38 knockouts of trbCf and OriTf.
Picture of gel of TraG KO 20mers (lane 1= TraG KO clone #7, lane 2= TraG KO clone #8, lane 3= ladder)

Both clones #7 and #8 have bands that are around 2000 bp which means that they are both the wild type TraGr (wt TraGr is expected to be 2246 bp long, but TraGr KO is expected to be only 1462 bp long). Therefore, today we picked more colonies from the TraGr KO plate and grew them up, and tomorrow we are going to mini prep and map them. Hopefully, we will find a colony that will have the TraGr KO. Also, Chris is going to design a different TraGr KO cassette in case all the colonies we map are wt TraGr.

Today, Matt did the knockouts of OriT and trbCf on the F plasmid (both poX38xpKD46 variants GeneHog and MC1061). He also did some library stuff.
Jenn minipreped, mapped, and sequenced the trbCf complement pSB1A2-J23014.
Here is the gel from the trbCf complement analytic digest (lane 1 = ladder, lane 2 = clone 1, lane 3=clone2)

I am growing up overnights of pSB1AKG0-J23026 and pSB1AKG0-J23027 the TraG and TraM complements with double terminators so that they can be miniprepped and sequenced. Unfortunately, when I was making pSB1AKG0-J23026 the digest resulted in more bands that expected, but I cut out ones that seemed to be at appropriate lenghts and thus we have 2 variants of the plasmid which need to be sequenced in order to determine which one is the correct one.
Also finally, I transformed the helper plasmid pCP20 into J23017 (Rlambda TraG KO) and plated it on Amp Cam at 30 degrees. I had to do a small scale electroporation prep to make the competent cells in order to do this. 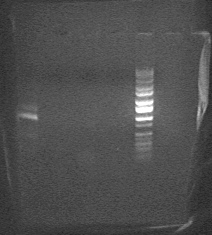 We have conjugated the pOX38 with some of Chris's stocks of pKD46 (in GeneHogs and MC1061) . We will have to see tomorrow if his stocks were still healthy.
Also, the trbCf complement PCR worked today (affirmed by a gel) and we have cleaned up the PCR, digested it in dPN1, EcoRI, and SpeI, then cleaned up the digestion, ligated with pSB1A2-I13511 digest in ecoRI and SpeI, and then transformed it into TG1 cells.
The sequencing data came back for the TraM and TraG complements and they are positive for both, so they are tough tagged and put in the freezer.
Finally, we are doing genomic minipreps of the RlambdaTraGknockout clones, from here on known as J23017. We then PCRed them with JL10 and JL11 oligos and hopefully when we map them, they'll show a band around 1200, instead of 2000 like last time, which indicated wild type Rlambda.
Here is the Rlambda traG KO PCR's Clones 6,7,8: 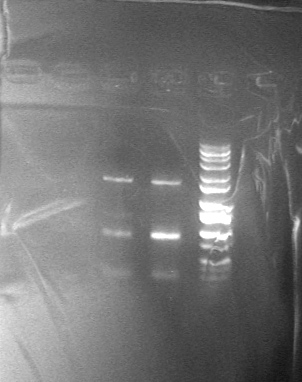 Clones 7 and 8 seem to have the correct band of the TraGr knockout, but they also seem to have the wt TraGr. Therefore, we restreaked clone 8 onto a Cm plate to try to seperate the wildtype from the knockout. Also, we did four more PCR preps (fusion) for clones 7 and 8. This time we used oligos JL10 and 1016R (ie. 7A, 8A), and we used oligos 824 and JL11 (ie. 7B, 8B). We did this in order to make sure we have the TraGr knockout.
We are also adding double terminators from pSB1AKG0-B0015 digested in Eco/Xba to the TraM and TraG biobricks by digesting them in Eco and SpeI.

Today we started cultures of pOX38 and pKD46 (in GeneHogs and MC1061). The pKD46 was from Chris's -80 stock. We are redoing the mating and the knockout because pOX38 mated with pKD46 aquired Cloramphenicol sensitivity somewhere in our procedure. Also, our four plates that we plated on Friday gave us unexpected results. All four plates came out with yellow colonies and smell like their is some kind of bacteria. We believe that DH10B is the culprit in this instance. We think that DH10B might have been contaminated before we began our experiment.
However, we are proceeding with the Rlambda TraG knockout by doing a genomic miniprep of the 4 cultures we grew up Friday, then PCRing with the TraG complement oligos JL10 and JL11, and finally mapping them to see if the size of the PCR fragment can give us a conclusion on whether TraG has been knocked out.
Also, the parts registry has been updated with all the complements and knockouts.
We are still waiting for out the sequencing data for the TraM and TraG complements.
We got our trbCf 20mers! So we are PCRing them with Olambda as the DNA template.
Mapping of cultures that we started on Friday was not successful. Gel electrophoresis showed three failures and one WT traGr. So, we are growing eight more over night cultures of J23017 [traGr] from Rlambda.