1) The first step is to reconstruct the raw diffusion-weighted volumes ...

Set the subject identifier variable. This is just an example: you can use any string.

Make the .BRIK and .HEAD files from raw data stored in the subdirectory {$ec}_060807 (your directory name will be different)

The dynamics, slices and repetition time are all available in the Philips .PAR file

The output is an AFNI image file called {$ec}_DMaps+orig

2) The second step is to correct diffusion volumes for movement, and coregister the data to the space of the high resolution anatomical volume

This step registers each diffusion weighted volume to the skull-stripped anatomical volume, in this case called {$ec}avaganatSS+orig

3) The third step is to compute the diffusion tensor image, which will be used for deterministic fiber tracking

The gradient orientation table is stored in a textfile called DWGradientVectors.txt, and is listed below the tensor computation command

The output is a file called {$ec}_Tensors.nii.gz, which is in single-subject space and in alignment with the high resolution anatomy

4) If you've transformed your skull-stripped anatomical volume to Talairach or MNI space, you may apply this transform to the individual diffusion-weighted volumes

This allows you to conduct fiber tracking in a standardized space to allow for comparisons between subjects.

The output is a tensor file similar to the file produced in step 3, except that it is in standard Talairach space not single-subject space

DTI Query 1.1b is available at: http://graphics.stanford.edu/projects/dti/dti-query/

First we do computations on the data in single-subject space

The output files are fa.nii.gz and precomputed.pbd, which are the FA volume and fiber pathways respectively

Next we do computations on the data in standardized Talairach space

The output files are fa.nii.gz and precomputed.pbd, which are the FA volume and fiber pathways respectively

Now you are ready to load your processed FA and fiber pathway file in DTI Query for interactive tractography! 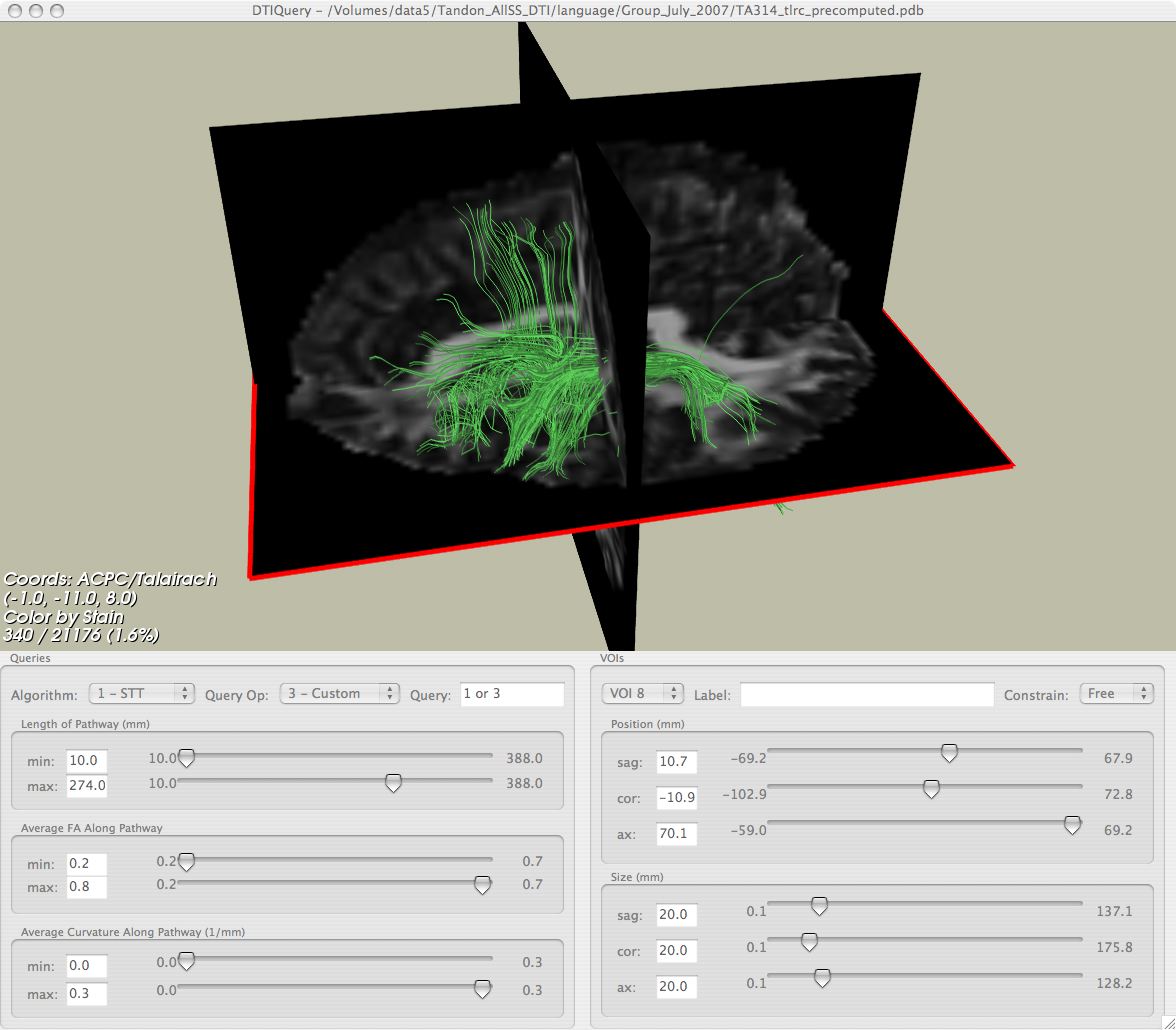 To reduce Eddy Currents, Phillips recommends increasing the partial k-space collected from 0.5 to 0.73; Vips does this as a matter of course. Phillips does not support the double spin-echo method described below, but YuXiang has implemented it and finds that it gives very similar results to the standard Phillips sequence. Note the importance of 12-parameter registration with 3dAllineate:

Eddy-currents can be a problem, but there aren't that many reliable correction methods out there. The FSL method is just a matter of performing affine registration to the b=0 image, which isn't necessarily the best approach given that the b=0 image has a large CSF contribution, which is absent from the DW images - in certain cases, that's been shown to introduce 'over-stretching' of the DW images to fit the extra ring of CSF. That shouldn't however be a problem with your data, since they seem to have very good SNR.

In general, the most effective approach is to use the so-called 'twice-refocused' acquisition, which is designed to minimise eddy-current effects - it is effectively a double spin-echo sequence. Here's the reference if you need it:

However, what I noticed was that the DICOM data you sent me had a fair bit of motion artefact, which had obviously been corrected in the equivalent NIfTI image. Whatever routine you used to do the motion correction did a very good job, and the resulting images do not seem to have any significant eddy-current artefact in them - you can usually tell by looking at the colour-coded direction maps: with eddy-current artefacts, there's usually a ring of colour around the edges of the brain, where the various DW images don't match. It's possible that your motion correction also performs eddy-current correction as a by-product. This will be the case in particular if you used a full affine registration algorithm (i.e. 12 degrees of freedom, including scaling & shearing), rather than a simpler rigid-body algorithm (i.e. 6 degrees of freedom, only translation & rotation). For example, the eddy-correct routine in FSL uses such an affine registration routine, which explicitly allows scaling, shearing & translation (all possible consequences of eddy-current effects). You might want to check what algorithm you used for the motion correction, and in particular what parameters were used, as you may already be performing eddy-current correction...

It can also be good to modify the gradient matrix to take into account subject movement. (Since gradients are applied in scanner space, not subject space).

A compelling paper on this topic is Leemans and Jones, Magnetic Resonance in Medicine, 2009

Here is Tim's script to do that. File:@rotgraddirs.csh