"A long time ago, in a building far, far away..." Randy designed some fancy barcodes for our BioBricks.
Here's the URL describing the original plan.
We've been building all our new ORF parts with barcodes for the last couple years.

More recently, with Heather's help, we ordered five sets of primers to finally test whether or not these barcodes work. Remember that the original purpose of the barcodes was to be able to provide a qualitative screen for whether or not a uncharacterized biological sample contains any BioBricks (or not). Nothing more fancy.

The five different primer sets are... 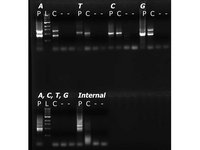 Going forward, based on conversations with Kathleen, it seems like we might want to consider improvements to our barcodes such as:

Update: I just spoke with Randy about barcodes some. Randy reminded me that a number of folks (e.g., Pam Silver's lab) are working to adapt BioBricks for protein engineering, and that Austin has advanced BioBricks assembly schemes that are scarless. The short and the long of all this work is that we might consider moving from ORF-based barcodes to system specific barcodes. I.e., we could have a single BarCode part that all BioBrick systems include. The features of such a move would be:

Issue: Barry asks about whether or not sequencing will improve so fast, that a PCR-based detection scheme will be irrelevent by the time BioBricks are widely distributed.