The statistical analysis test that was used for both sets of data (heart rate and temperature) was a two-tailed t test. This test is the most effective test at determining if there is a difference between two sets of data which was the purpose of the experiment. The p-value for the heart rate t test was 0.4271 and the p-value for the temperature t test was 1.09676X10^-21 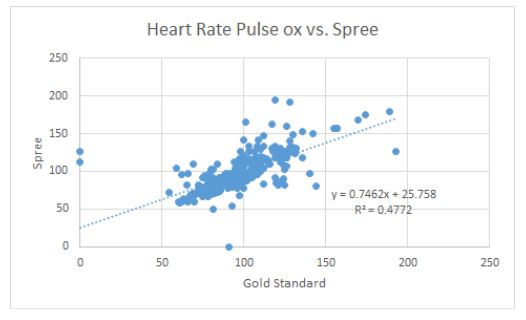 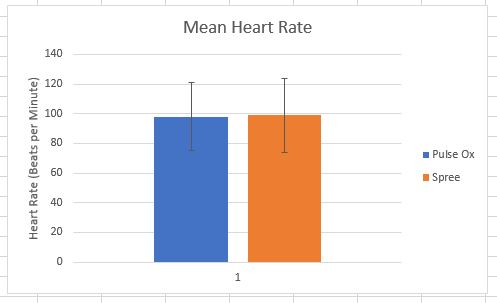 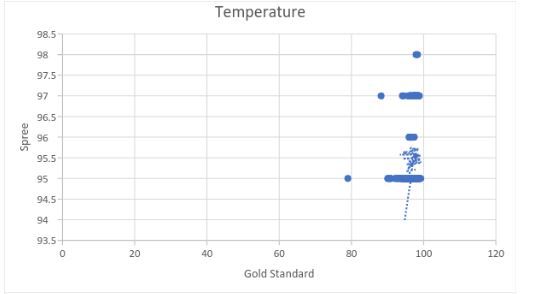 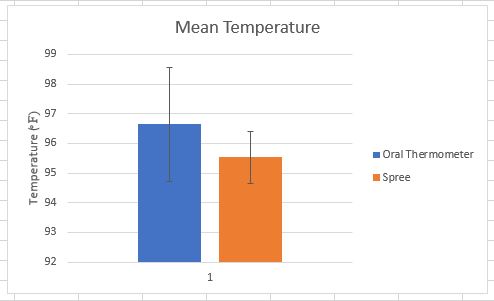 Heart Rate- There is not statistically significant evidence that the Spree device works any better than the Pulse Ox (they work about the same) because the paired t-test results in a p-value of 0.4271, which is much greater than the α-value (significance level) of 0.05. This is reinforced by the fact that the correlation coefficient is 0.4772, signifying that there is not a strong correlation. In conclusion, for heart rate,  the Spree device is not any better than using the Pulse Ox, they give relatively similar results.

The final experiment would have to be testing the device for deep brain stimulation. Rather than having a paired t test experiment, there would have to be two separate experimental groups to test for a placebo effect and therefore it would be an independent t test. Four groups of about 50 individuals with Parkinson’s Disease each will be used. Before the tests, a model for Parkinson’s needs to be developed. To accomplish this a test of hand control will be used on each individual. Each person will have a metal hoop around a wire that has curves in it. When both the hoop and wire touch an electrical current that can be detected (and not harmful) can be recorded. Each of the three groups’ scores will be averaged. One group will have deep brain stimulation, one group will have ultrasound stimulation, one group will have no stimulation, and one group will have a turned off ultrasound “give” them stimulation. The last group is to make sure there is no placebo effect. The test mentioned earlier will be performed by the individuals on a regular basis (probably every week) after stimulation. After so many weeks, the results will be graphed. In order for our probe to be “successful” an ANOVA test will determine whether the hypothesis is right or not.