Yeast as a Cell Biological Tool
Our current understanding of many important cell biological processes is based on a combination of biochemical, microscopic, and genetic studies. The unicellular eukaryote Saccharomyces cerevisiae, often referred to as budding yeast, is an important model organism that can be studied by all three of these approaches, but it is an especially valuable tool for genetic studies of cell biology. Through the execution of elegant genetic screens, many yeast mutants that are defective in particular cell biological pathways were isolated. Characterization of such mutants and the cloning of the responsible genes led to the identification of important components and mechanisms of many cellular processes, including the cell division cycle and protein sorting and secretion. Because many of these processes were highly conserved throughout eukaryotic evolution, similar factors and mechanisms discovered in yeast still exist and function in “higher” eukaryotic cells such as mammalian and human cells. Therefore, studies in the simple, genetically-amenable yeast S. cerevisiae have tremendous value in working out complex cell biological processes that function throughout the eukaryotic lineage. 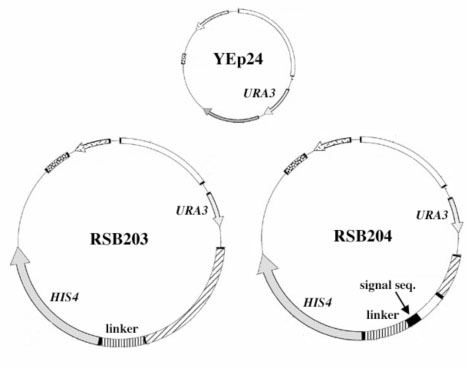 Using the Reporter Gene to Investigate Defects in the Secretory Pathway
In Lab 6, you will test the ability of the nine transformed yeast strains (WT, sec18, and sec61 strains, each transformed with YEp24, RSB203, and RSB204) to grow on two types of media plates (ura- and ura-/his-) at three different temperatures (25°, 30°, and 37°C). One week of incubation will be required for the phenotypes to be assessed accurately. You will use that time to do some research to learn about the functions of the SEC18 and SEC61 gene products and, based on what you learn, predict the growth phenotypes of all nine strains under the various conditions. In Lab 7, you will compare your predictions to your actual results and develop hypotheses about the where the blockage in the secretory pathway might be to explain the growth patterns that you observe. The Western blot that you will perform in Labs 7 & 8 will allow you to test your hypotheses.