From OpenWetWare
Jump to navigationJump to search
Wellesley College

We are ending our investigation of the PTC taster gene and beginning a new investigation of photosynthesis. Your lab today is divided into two distinct parts. There will be a wet lab component where you will use the peak absorbance of the main photosynthetic pigment of plants, chlorophyll a, to determine the concentration of an unknown chlorophyll-like compound. You will learn to use an important lab instrument, the spectrophotometer, to measure the absorbance spectrum of this pigmented compound and to find the peak absorbance. You will use this peak absorbance to measure absorbance of an unknown and to determine its concentration. To accomplish this goal you will need to create a standard curve from measuring the absorbance of a series of dilutions of known concentration of this pigmented compound. This experiment is based on the relationship between concentration and absorbance known as the Beer-Lambert Law.


In the second and third lab in this photosynthesis unit, we will examine various factors that influence photosynthetic electron transport rates. When scientists try to understand complex biological processes through lab experimentation, they often try to parse out an essential part of a complex process as a way of understanding that part and its relationship in a broader context. Sometimes scientists perform indirect measurements using indicators. In this series your goal is to understand some of the factors that drive the rate of photosynthesis by measuring indirectly one part of the energy transfer process.


The second part of Lab today will be a collaborative evaluation of your draft figures created from the preliminary course taster data and a science writing workshop that focuses on the draft outlines of the Introduction and Discussion sections of the primary research report that you will write about your PTC taster gene investigation.

PHOTOSYNTHETIC PIGMENTS Chlorophyll a and b impart the green color that one associates with plant leaves. Carotenoids, which are yellow pigments, are also present in leaves but are usually masked by the chlorophylls. It is only in the fall when the chlorophylls are degraded faster than the carotenoids that the yellow color becomes visible to us. The chlorophyll and carotenoid contents of plants can vary markedly with its age, or depend on environmental factors such as light intensity or quality during growth. The pale green appearance of a willow tree in early spring is markedly different from its olive-green of late summer. The intense dark green of "shade adapted" plants differs from the lacy green colors one sees at the top of a forest canopy.

Chlorophylls are found in the chloroplasts and are associated with the thylakoids, the internal membrane network of these organelles. It is now established that all chlorophylls are organized as discrete chlorophyll-protein complexes within the lipid matrix of the photosynthetic membrane.

The majority of chlorophyll a molecules (and all chlorophyll b and carotenoid molecules) function as antenna pigments. In combination with proteins, they form the light-harvesting complexes, which absorb and funnel light energy to the reaction center chlorophylls, thereby allowing the plant to utilize a broad spectrum of wavelengths for photosynthesis. Some of the chlorophyll a molecules serve specialized functions in the reaction centers of photosystems I and II, where the light energy is used to drive the reduction of components of the electron transport chain.

Figure 2. Molecular structures of chlorophylls a and b. Image from: http://commons.wikimedia.org/wiki/File:Chlorophyll_a_b_d.svg

In order to obtain an absorption spectrum from which to determine the peak absorbance of a pigmented compound, one must first extract it and dissolve it an appropriate solvent. We will not extract chlorophyll from the thylakoids of leaf chloroplasts today; instead, we will use a pre-dissolved commercial chlorophyll-like compound that is sold in health food stores as a dietary supplement. 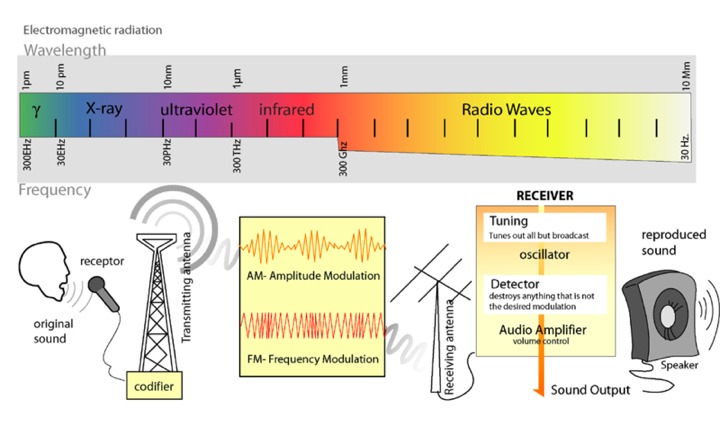 The radiation in the visible portion of the spectrum is detected as colors by the human eye. Color is determined by the wavelengths of light that are reflected by molecules in the substance, while the other wavelengths are absorbed. Therefore, an object that appears red absorbs the blue-green wavelengths of light and reflects the red wavelengths. Our perception of color is qualitative, but there are instruments that quantify the amount of light absorbed at a particular wavelength by a solution. These instruments are called spectrophotometers. As shown in Figure 4, a simple spectrophotometer contains a light source that is focused on a prism or diffraction grating, which splits this light into individual energy bands. These bands are further focused through a narrow slit, which can be moved across the spectrum to select a specific wavelength. This monochromatic (one wavelength) beam of light is passed through a cuvette containing the sample to be measured. As the light passes through the sample, some of it is absorbed by the molecules in the solution. The remainder of the light is transmitted through the sample, and impacts a photodetector that changes light energy into an electrical current. The magnitude of this current is proportional to the light intensity. The detector signal is amplified by a photomultiplier and is fed into the display meter as a number (digital) or a stylus deflection (analog), which indicates the amount of light absorbed by the molecules in the solution. Most spectrophotometers can also indicate the amount of light that is transmitted through the solution.

Figure 4. Diagram of the Light Paths in a Spectrophotometer. Image from:
http://commons.wikimedia.org/wiki/File:Spetrophotometer-en.svg

The Beer-Lambert Law The amount of light that passes through a solution in a spectrophotometer is called transmittance (T), and can be defined mathematically as, T = I/Io, where I is the intensity of the light transmitted through the sample, and Io is the intensity of the incident light on the sample. The absorbance (A) is the negative log of the transmittance, A = –log T. Absorbance is directly proportional to the concentration of the absorbing molecules in the solution and the distance the light travels through the solution. Therefore, absorbance can be used as a quantitative measure of the concentration of a solution. These concepts are expressed mathematically in the Beer-Lambert Law:

The molar extinction coefficient is a constant that is dependent upon the chemical nature of the absorbing material and the wavelength employed for the absorbance measurement. The path length is determined by the width or diameter of the cuvette used to contain the sample. Absorbance is unitless.


PART I: Determination of an Absorption Spectrum (Do this exercise in pairs)

Prepare A Serial Dilutions of Chlorophyll Derived Stock Solution Each pair will use a stock solution to prepare a series of 4 dilutions of a dietary supplement that contains chlorophyll among other compounds (stock chlorophyll derived compounds at 0.05mg/ml). Each dilution in the series will differ from the previous dilution by 1/2, so the dilution ratio for each tube is 1/2, 1/4, and 1/8. Calculate the concentrations of the chlorophyll derivative that the tubes (in micrograms/ml) will contain after the dilutions have been prepared, and record them in your lab notebook.

B. Determination of Absorbance versus Concentration You will now use all four dilutions (stock, 1/2, 1/4, 1/8, 1/16) to demonstrate the relationship between absorbance and concentration. Do not read the stock solution, as this will give you an absorbance value that is too high. Set the Spectronic20+® spectrophotometer to the wavelength that gave maximal absorption when you ran the absorbance spectrum of this compound. Zero the instrument using water as the blank( Appendix B). Read the absorbance of the four concentrations and record them in your lab notebook next to the appropriate concentrations. Using the Excel directions in Appendix D plot these data to generate a simple scatter plot. Be sure to label the axes and give units, if appropriate, (mg/ml or ug/ml on the x and A no units on the Y). Is there any apparent relationship between the absorbance values and the concentrations of the four solutions? Does this relationship follow the Beer-Lambert Law?

C. Data Analysis and Determination of an Unknown Concentration of Chlorophyll Derived Solution This section of the lab will address some of the ways that analytical data are presented and evaluated. For this, you will be using the absorbance and concentration values obtained for your chlorophyll derived solutions in Part C.


Linear Regression Analysis
Linear Regression is a method of data evaluation that enables us to create a linear plot of absorbance data versus concentration for a series of solutions. This plot can be used as a measure of compliance with the Beer-Lambert Law and to predict the concentrations of unknown samples. The plot generated by the linear regression method is called a standard curve, and is described by the equation y = mx + b, where m is the slope of the line, b is the y intercept, and x, y are the data points. Because all data may not be perfectly linear, a measure of how well the regression line fits the actual data points, called the correlation coefficient (R2), is also determined. The calculations for linear regression are quite tedious, so computer programs are often used to assist with the calculations. We will be using Microsoft Excel to calculate and plot linear regression data today. The data must be entered such that the independent variable (concentration, in this case) is plotted on the x-axis. The dependent variable (absorbance, in this case) will be displayed on the y-axis. A sample standard curve can be found here: Dunne RP (1999) Spectrophotometric measurement of chlorophyll pigments: a comparison of conventional monochromators and a reverse optic diode array design. Mar Chem 66:245-251.

The linear regression equation and the R2 value are printed on the graph. A R2 value equal to 1 is indicative of perfect correlation among all the data points, and R2 values of 0.99-0.97 indicate good linearity. If acceptable linearity is demonstrated, the regression equation can be used to calculate the concentrations of unknown solutions by substituting the absorbance of the solution into the equation as the y value and solving for x.

Turn in at the beginning of Lab 9
1. Your completed TASTER paper is due at the beginning of Lab 9 or in one week (whichever comes first). Please write a full scientific research report (except that you may omit the Materials and Methods Section) using your data to answer the experimental question, What is the distribution of the Taster PTC phenotype and genotype at Wellesley College? Your discussion section in this paper will use your data to address a broader topic of interest. Choose one of the following topics: Is Wellesley College unusually diverse, OR do your findings support Fisher's Balancing Selection Theory for the PTC taster gene? DO NOT TRY TO DISCUSS BOTH!

The Results section will use your data to address the following possible aspects of this question: (Choose among these possibilities or other ways to process the data in ways that best show your findings, answer the experimental questions, and lead into your discussion topic)
Tasters vs Non-tasters
Genotype: PAV/PAV vs. PAV/AVI vs. AVI/AVI
Allele frequencies: PAV vs. AVI
Agreement between prediction of phenotype from genotype and what that might mean in terms of the presence of rarer alleles (other than PAV and AVI--use the Wooding 2004 paper and the Drayna papers as sources)

2. In your lab notebook, prepare a flow chart for the Hill Reaction (Lab 9).
3. Review the mechanisms of electron transport and proton flow in photosynthesis in your textbook.

Link to Labs in this Series and the Last Series