Every year, the demand for tissue replacement through surgical intervention exceed donor tissues.Today,the use of an alternative biomaterials for tissue repair to satisfy the demand of the population is a great challenge for bioengineer.Different materials have been used for tissue replacement including synthetic scaffold. However,their low biocompatibility and mechanical property had promote many complication and rejection upon surgical procedure.Today,Biological scaffold are widely used for tissue replacement because of their biocompatibilty,mechanical property and scaffold architecture.[4].They are defined as decelluralize extracellular matrix made of laminin, fibronectin,elastin and collagen.Among their application, we can illustrate skin replacement,Hernia repair,breast reconstruction,tendon repair and genealogical reconstruction.The most common biological scaffold are Autograft,Xenograft and Allograft. Each of those scaffold differ in their biocomapatibilty,source of graft, cross link to the host tissue, importantly on their regulation by the FDA.In 1823 the first skin graft-transplantation from one location of an individual to another location was performed successfully.However, it was in the early twentieth century that xenograft was first performed.In addition, the first allograft was performed in 1837 in a gazelle.In this paper, we will compare and contrast those three biological scaffold.[1][2]

Graft is performed as a medical procedure to repair a damage tissue. Three different type of graft exist depending on their sources .Those include xenografs, autografts and allografts. Xenografts is defined as the transplantation of tissue from one donor to a completely different species(animal to human).The most common harvest source of xenograft are the small intestine and dermis of the porcine,pericardium,fetal and dermis of of a bovine and also equine.However,xenografts originating from country which has an history of spongiform encephalopathy are forbidden in the US. Their differ from the allografts in which case the donor and the host are from the same species( human to human).In autograft,The recipient is consider as the source in which case a tissue is transplanted from one part of the body to another.An example is the ligament repair in which case the most common harvest sites are the patellar tendon,hamstring tendon and quadriceps tendon of the patient.[5].The picture below summarize the source of each graft. 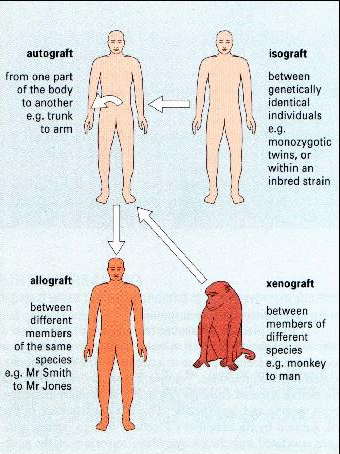 A perfect grafts can be define as biocompatible to the host environment,perfect mechanical property,contain no antigen which could promote an acute immune response. Therefore,the preparation of each scaffold before implantation is a very important step that is regulated by the FDA(Food and Drug Administration). Prior implantation,the donor is tested for any type of antigen such us HIV-1,HIV-2,hepatitis B and C,trace of toxic substance as required by the FDA.However,due high degree of genetic similarity between the host and the donor in autograft less test are required by the FDA .Alograft require even less test than autograft because the donor is also the host.After the biological scaffold is obtained,the donor tissue is decellurized,disinfected and packed( autograft and allograft) by a tissue bank recognized by the FDA.However in 2002,the center for disease control( CDC)identify clostridium antigen on 13 allograft and 11 of them originated from the same tissue bank.This issue had a negative impact on the significance of the FDA requirement for donors screening. Decelurization also occur with the xenografts after which the scaffold is sterilized instead of being disinfected as is the case for autograft and allograft.

As we know, tissue repair are supported by fibroblast penetration,acellularization and remodeling. Fibroblast penetration in the site of graft is very important for tissue healing in the sense that it promote acellurization.Autograft and Allograft promote more infiltration of fibroblast compare to xenograth. This is due to the excessive cross link of the scaffold.Experiment perform on a human acellularized dermal matrix and porcine dermal matrix confirm a large amount of fibroblast at the site of grafts compare to bovine in which a large amount of fibroblast was found at a later time.The picture below show the degree of infiltration of fibroblast in human and bovine scaffold.Wound healing also occurs slowly in xenograft compare to allograft and autograft. Different studies suggest that the cross linking of the scaffold in xenograft reduce their permeability to the fibroblast which in turn slow the series of events require for proper wound healing.Remodeling occur after fibroblast infiltration and acellularization. During this stage,the newly implanted graft will try to accommodate to the new environment.If remodeling doesn't occur properly,tissue degradation and rejection could occur.[1]. 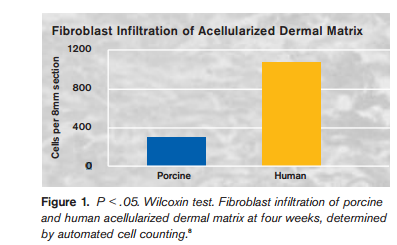 Tissue implantation are regulated by the FDA.However the regulation differ for each biological scaffold. Xenografts are considered as medical devices while autografts and allografts are viewed as a Human Cell and Tissue/Product by the FDA.In addition, due to the high degree of biocompatibilty, allograft and autograft are not sterilize before implantation compare to xenograft.In addition, the requirement for packaging and storage are set by the tissue bank.The picture below describe an overview of dermal donation process. 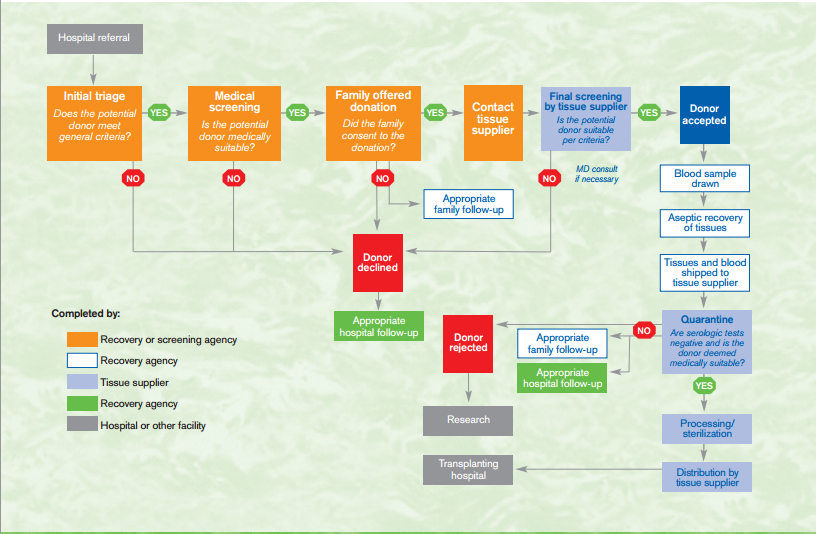