Atomic Force Microscopy is one way of imaging surfaces by essentially tracing them out with a probe or "tip". A laser is focused on the back of the tip and as the tip moves up and down across the samples surface the laser reflects off the back of the tip at different angles into a light receptor that will interpret this data. This imaging technique that provides a distinct advantage over other techniques due to the high quality of its images at immense magnifications.

Atomic Force Microscopy has numerous advantages over other common imaging processes. For one you do not have to damage or contaminate your sample in any way because AFM doesn't require any special alterations to the product or even the environment in order for it complete the process. The sample can be as wet as it prefers which is extremely useful if one intends to work with living cells and in fact the probe can be completely immersed in a liquid environment and still be able to proceed with the imaging.

In addition, Atomic Force Microscopy provides incredibly clear images of samples at absurd magnifications. Most images are recorded in widths of nanometers and because of how AFMs work the images can always be viewed in 3-D thanks to the probe taking height measurements. [1][2] 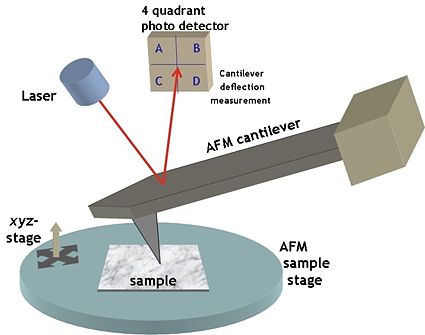 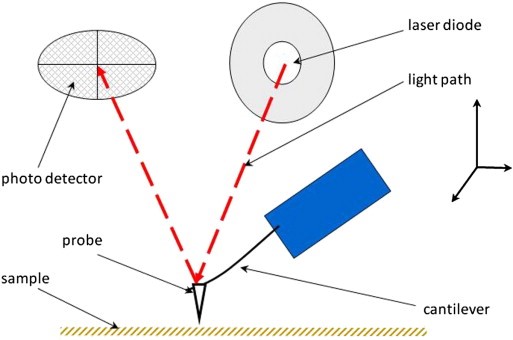 In this mode the probe makes direct contact with the surface. This mode can cause damage but at the same time can be used to obtain data beyond what is purely visual because of the contact factor, giving it a unique edge in terms of imaging processes.

This mode uses an oscillating probe and is better if the surface of the sample isn't ideal for contact such as if it wasn't smooth and would create substantial drag if you were to draw the probe across it.

One of the primary reasons AFMs are so special is that they are much more than just a visual aid. They are more than capable of not only telling you what the surface looks like and how its contoured. AFMs double as a device that is also effective at acquiring information about the mechanical qualities of the surface of the sample. This is because of how the tip of the probe interacts with the surface. You can derive measurements like hardness from the how the probe tip collides with the surface. You could determine roughness from dragging the tip across the surface. Elasticity can even be measured from the sample by dragging and experiencing a release of tension. 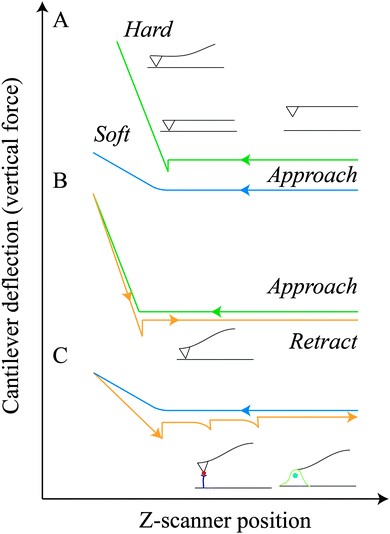 Is the practice of applying molecules to the tip of the probe and observing how they interact with the surface. This is particularly practical for observing biological surface interactions. The membrane of a cell can perform a great many functions and if one were to know exactly what the stimuli for those functions were then they could use them to advance a plethora of biology based sciences. For instance at the surface of a cell you can witness protein folding/unfolding mechanisms or perhaps you're interested in receptors and their binding habits and then there's still many more surface associated proteins on cell membranes that serve a wide range of other functions. There are two examples below of what understanding membranes could do for us but the total list is expansive. [1]

This is probably the most obvious application of what understanding certain membranes would lead to. Knowing what receptors to target would allow you to essentially force feed cells what you wanted them to have regardless of what their default stimulus would be. [1]

Another application would be for engineering membranes that are more resilient. Membranes that are made to filter contaminants and impurities from water currently require expensive upkeep because they are fairly susceptible to certain salts and biological contaminants and must be stopped from functioning to be cleaned quite frequently. By using force spectroscopy to first coat the probe and then carefully applying a thin layer of a material one thinks could enhance the membrane, you can create relatively cheap and new membranes to experiment with in order to reduce the price of upkeep later thanks to whatever quality you were desiring in the enhanced membrane whether its now more resilient to contaminants or perhaps just easier to clean. 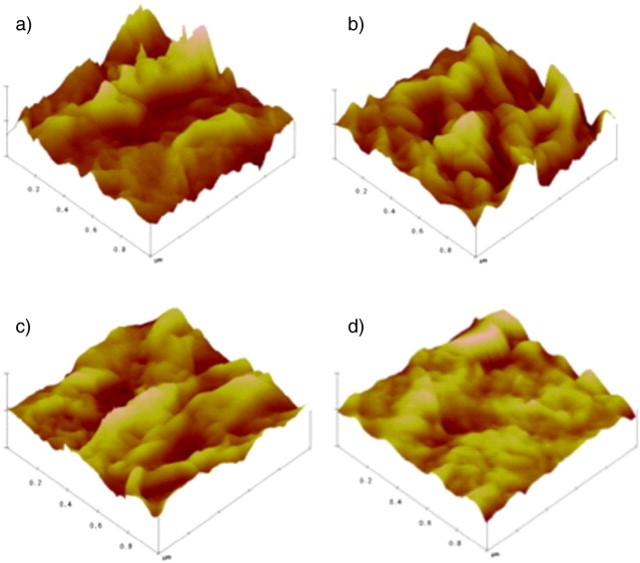 Here we have an image of a membrane becoming more and more enhanced with a desired material, initially we see that there are some serious peaks and valleys (aka roughness) but as more layers are applied the valleys and peaks tend to even out and as the inherent roughness decreases the membrane becomes more effective as contaminants have a tendency to clog the valleys of surfaces with high roughness. [4][1]

Atomic Force Microscopes have been instrumental in providing a quality and understanding of nano-metric images that has already proved invaluable in a multitude of scientific (mainly biological) advances. Their ability to image in 3-d and measure mechanical quantities makes them not only unique among imaging processes but irreplaceable. The most notable downside to AFMs is that they take a very long time to accomplish anything with, however this is only a setback because AFMs that can image surfaces much faster are well under development.[3]

[5] "AFMsetup" by yashvant - http://kristian.molhave.dkThis illustration was made for the Opensource Handbook of Nanoscience and NanotechnologyThe image also appears on the Commons/nanotechnology page. Licensed under CC BY 2.5 via Wikimedia Commons - http://commons.wikimedia.org/wiki/File:AFMsetup.jpg#mediaviewer/File:AFMsetup.jpg