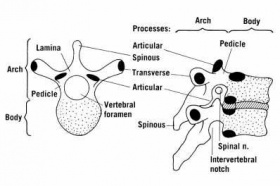 Each individual vertebrae is made up of a core of low density, cancellous bone enclosed by a shell of stiffer, more dense cortical bone [4]. Individual vertebrae each have an anterior (front facing) vertebral body. This section is crudely cylindrical in shape. A short, thick pedicle extends in the anterior (backwards) direction on either side of the vertebral body. Lamina extend in the anterior direction from the pedicles; the combination of the lamina and pedicles form the neural, or vertebral, arch. This arch houses and protects the spinal cord. Attached to the vertebral arch is the spinous process, which projects down and in the anterior direction, as well as four articular and two transverse processes. These processes are where muscles and ligaments attach to the vertebral column. [4]

Motivation and Health Issues Dealt With

Artificial vertebrae provide an alternative to traditional spinal fusion. Spinal fusion is the process of fusing multiple vertebrae together in order to immobilize a vertebra that is causing pain by abnormal motion. The motivation for development of artificial vertebrae is to replace human vertebrae injured due to fractures, tumors, and disease. These conditions affect the structure and decrease stability of the vertebral body (column) as a whole, as well as affecting the vertebra’s height. [3]

A burst fracture is when a vertebra breaks from a higher energy axial load then is present in the case of a compression fracture. Burst fractures are more severe and often occur in the thoracolumbar regions. They are associated with both anterior and posterior damage and often result in kyphosis, or curving of the spine [7].

Although spinal tumors are rare, their surgical removal often compromises the strength and function of the vertebral column. Most spinal tumors do not originally form in the spine, they often metastasize to that area due to the abundant blood flow available to tissues in the spinal region [1].

Artificial vertebrae provide an alternative to traditional spinal fusion. Spinal fusion is the process of fusing multiple vertebrae together in order to immobilize a vertebra that is causing pain due to abnormal motion from kyphosis. This process normally involves the use of a structural bone allograft [7]. Using a combination of an artificial vertebrae with a bone autograft decreases the risk of transmitting infectious disease that is present when using a bone allograft [7].

Vertebrael structures can be replaced with bone grafts, both autologous and allogenic, or with implants known as corpectomy cages (corpectomy is the surgical removal of a part of the vertebral body, either a whole vertebra or a part of one) [3]. The most common type of bone graft used is “autologous tricortical iliac crest” bone graft. Autologous or allogenic grafts are also taken from the fibula, ribs, tibia, or femur. [3]

Insertion of artificial vertebrae is done under complete anesthesia. The damaged original vertebra is removed and replaced with the artificial vertebral body. This implant is usually made up of a perforated cylinder and has two threaded endplates. In most cases the endplates have large spikes that help to stabilize the cylindrical implant, which has several perforations that are useful for the insertion of the bone graft. In severe cases of kyphosis the best results are often obtained using a combination of replacement artificial vertebrae and other forms of spinal fixation such as artificial intervertebral discs and various spinal plate and rod systems [1, 8].

The most recently developed and commonly used forms of artificial vertebrae are structures known as vertebral body replacement cages; they are usually made of titanium [3]. There are two main types of cages: expandable and non-expandable. Non-expandable cages must be produced at the exact size needed for the specific patient, and at the correct angular orientation for the side plates that will be used in that exact patient; both of these factors are determined by the patient’s body type [3]. Expandable cages have been tested more recently, as they seem to have several advantages. They can be inserted in a compressed form, meaning that a smaller area is needed for surgical access, and they do not need to be manufactured at a specific size depending on the patient [3]. However, they are, in most cases, considerably more expensive to produce [3]. Several studies have shown that the biomechanical stability of newly developed expandable cages is about equal to that of both non-expandable cages, as well as that of older types of vertebral body replacements, such as mesh cages, Harm’s cage, and bone grafts [2].

A study done as early as 2004 comparing expandable and non-expandable cages found no significant difference in their biomechanical stability [3]. More importantly, it showed that variations in design of expandable cages (from company to company) did not have an effect in biomechanical stability, as they all employed the same basic design structure. Although results were unclear, this study seemed to find that expandavle cages do increase the effect of stress shielding; this could potentially result in less favorable long term outcomes in patients with expandable cages [3].

An additional study was done in 2007 using a Synex brand implant in vertebral body replacement surgery; specifically a titanium Synex telescopic expansion cage was used along with additional stabilization [2]. This study used the implant in 14 cases of an acute fracture, 4 cases of posttraumatic kyphosis, and 2 cases of skeletal disorders due to a tumor [2]. No fatalities or infections were reported, and there was no displacement or release of the implant found throughout the study. The correction of kyphosis was significant; it was found to be corrected up to 2 degrees in patients with posterior stabilization, and up to 5 degrees in patients with anterior stabilization. One exceptional case showed a correction of 10 degrees in a patient with anterior stabilization [2]. However, this study concluded that the use of these cages in cancer patients was controversial due to their high price and the shorter expected survival time frame of these patients. Synex was later forced to recall many of their expandable cage designs in 2009 after multiple cases of malfunctioning and failing vertebral body replacements [1].

A recent study, carried out in 2011, found that expandable cages have advantages over traditional mesh implants as well as structural allografts. This study looked at single and multiple vertebrectomy in the thoracic and lumbar regions of the vertebral column due to tumors, trauma, and infection [9]. After 12 months a significant improvement was found in kyphosis, spinal alignment, and general back pain among patients [9]. A full follow up 31 months after the operations found that height restoration due to the expandable cages was on par with that found from more traditional treatments and that there were no negative effects in the form of infection or mechanical failure [9]. This study concluded that expandable intervertebral body strut grafts are a legitimate, safe treatment in human spinal surgery and vertebrectomy [9].

Side Effects and Recalls

There are several possible side effects to the use of artificial vertebrae; the most obvious and serious is vertebral height collapse. In the event that an implanted vertebral body replacement collapses or becomes fractured, there is an associated decrease in height of that vertebra [1]. This not only causes severe pain, but also spinal instability. Such instability can lead to more severe kyphosis or even neural damage depending on the severity of the effect on spinal alignment. In addition, most artificial vertebrae require additional stabilization; these supplementary systems, such as a traditional pedicle screw and rod system, can be damaged and even fail completely if the one of the artificial vertebra associated with it fails [1]. On November 12, 2009 the FDA issued a recall of all Synthes brand vertebral cages after six cases of failure using the Ti Synex II Central Body Replacement model [1].