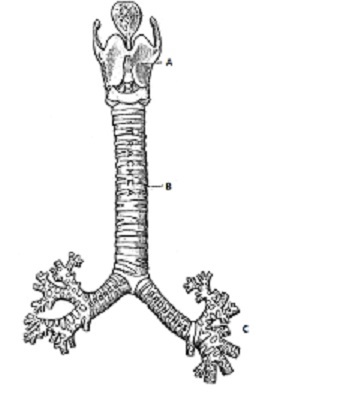 Trachea connecting the larynx to the left and right bronchus [8].

The trachea (also known as the windpipe) is composed of cartilage, muscular fibers, a mucous membrane, and various glands. The trachea, roughly 11 cm long in an adult, connects the larynx to the left and right bronchus and its main role is as an air passageway. It is lined with epithelial cells which produce a mucus membrane that is essential to several important tracheal functions. This mucus is responsible for catching dust and bacteria before the air reaches the lungs and this unwanted material is expelled from the body as phlegm (via coughing or sneezing). This mucus also moistens the air before it enters the lungs [5].

The loss or of proper functioning in the trachea from tracheal cancer, tracheomalacia, or any other reason can be devastating to normal airflow in the windpipe [5].

-Tracheomalacia: This is when the trachea is soft, flaccid, or floppy instead of rigid. This is usually due to a birth defect but smoking or various injuries may cause this as well [5].

-Tracheal stenosis: This is scarring or inflammation of the trachea which may lead to a narrowing of the passageway. If severe enough, surgery or a tracheal stent may be required to treat this condition [5].

-Tracheal Cancer: Although very rare, when this occurs a tumor may grow in the trachea to a point where it’s blocking airflow [5]. 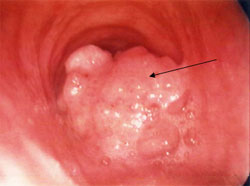 The loss of normal airway function due to a tracheal tumor can quickly become lethal. The tumor may grow uninhibited until it is completely blocking airflow if untreated. Tracheal tumors are very rare. There are about 1,800 cases in the United States each year with about a five percent survival rate. One of the major problems with tracheal cancer is incorrect diagnosis because the symptoms are so similar to other medical conditions like asthma. Symptoms include coughing, wheezing, shortness of breath, and in later stages fatigue and difficulty breathing caused from a partially blocked windpipe. Tracheal tumors are a huge motivation for the development of artificial tracheas due to the fact that other treatments such as stenting and chemotherapy fail after a certain point [4] [5].

Since 2008, there have been 10 trachea implants using tracheas from cadavers. The tracheas are harvested and chemically treated to remove all original cells. Once the cells have been removed from the donor trachea, it is essentially used as a scaffold. Stem cells are taken from the patient’s bone marrow and are seeded onto the scaffold trachea. The scaffold is inserted into a bioreactor where the patients stem cells and certain transcription factors are added to induce specific differentiation on the scaffold. Once the cells have differentiated to a certain point, the trachea is implanted into the patient where the body takes over and induces more cell differentiation and proliferation. There are a few issues with this type of transplant. Donor tracheas are not in high supply and even then the donor tissue may not be a good fit for the patient with regards to size. As with any donor tissue there is always a chance that immunogenicity problems may arise as well [6].

Before, during, and after artificial trachea incubation [2].