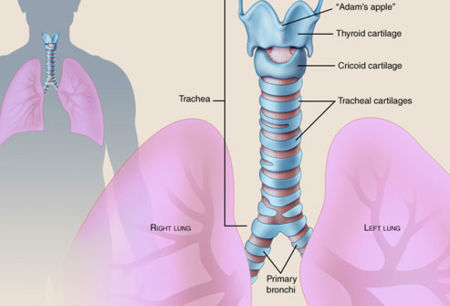 Figure 1. Diagram of a trachea [A]

The trachea, also known as the windpipe, is the passage way that leads air to your lungs. It is made up of cartilage, muscle and connective tissue. Tracheas are often around 4 inches long which are comprised of approximately 20 cartilage rings. On the inside lining of the trachea is a mucus membrane that is able to catch harmful airborne particles and bacteria before it reaches your lungs. Swallowing and sneezing are ways of removing these particles [6].

Breathing involves two main steps; oxygen enters the body when you breathe in and carbon dioxide leaves the body when you exhale. When someone takes a breath, oxygen goes through the nose and mouth down their trachea. From here the trachea splits up into two bronchi tubes which lead to the left and right lung. Next the oxygen travels through the smaller branches, bronchioles, to millions of small alveoli located throughout the lungs. Alveoli are small sacs in the lungs that allow for the exchange of gases with the blood stream. Here oxygen is exchanged with carbon dioxide. The red blood cells deliver the oxygen to the rest of the body while the carbon dioxide is expelled out the same way the oxygen came in. Too avoid food and drink from entering the lungs, a flap known as the epiglottis, closes while swallowing in order to prevent them from entering the trachea and lungs [5].

Many diseases can affect the trachea and diagnosis may be complicated by generalized symptoms such as coughing, wheezing, and shortness of breath. As a result, these diseases can become fatal if not treated or detected fast enough. Computed tomography (commonly referred to as CT) is often used to diagnose trachea abnormalities caused from disease or illness. Diseases of the trachea that can benefit from a trachea replacement are [3]:

Tracheal Cancer - Although rare, tracheal cancer is very fatal if undetected right away (5% survival rate). Tracheal neoplasms are lumps or growths which can result in malignant tumors. There are two types of neoplasms, one of which is benign while the other is malignant. These are usually detected by a CT scan. Benign neoplasms would most likely be surgically removed while malignant neoplasms would benefit from a full trachea replacement. A majority of tracheal tumors are a result of these malignant neoplasims which is most commonly squamous cell carcinoma (the second most common form of non-melonma skin cancer, common in head/neck cancers) [3,4].

Tuberculosis – Is an infectious disease which is caused by various strains of mycobacteria. It is an infection that attacks and severely damages the lungs. Tuberculosis can cause strain to not only the lungs from excessive violent coughing, but also to the trachea. Tuberculosis can result in a collapse of the tracheal branch of the windpipe as well as tracheal stenosis (a narrowing of the windpipe). Both of these conditions can be cause for a tracheal transplant. While tuberculosis is not extremely common in the United states, in 2010 1.5 million deaths were attributed to tuberculosis globally [11,12].

Tracheal stricture (stenosis) – Is an abnormal narrowing of the trachea which is usually caused because of trauma to the neck. It can be cured by temporary enlargement using tracheal dilation (last few days-6 months), resection (cut and sewn back together to enlarge), or a full trachea replacement [3].

Tracheomalacia – Is a weakness of the trachea walls which leads to collapsed airways, this is common in children with cartilage deficiencies. This can also be caused in adults due to injury or smoking. This typically is not serious enough for surgery but in extreme cases replacement may be necessary [6,3]. 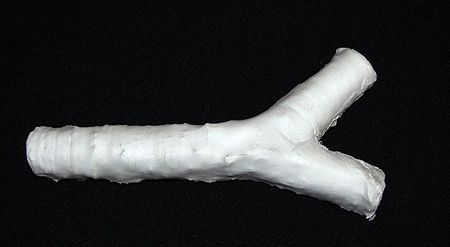 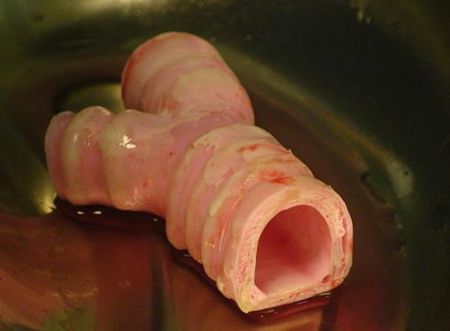 Macchiarini’s first 10 trachea transplants were from cadavers. These tracheas are turned into scaffolds by chemically treating them in order to remove any living cells. With the use of stem cells from the patient’s bone marrow they can be seeded on the scaffold to grow in a bioreactor [7].

The first artificial trachea surgery was led by Dr. Macchiarini. The scaffold is made from plastic nano-fibers and seeded with stem cells from the patient’s bone marrow. Similarly to the cadaver transplant, it is placed in a bioreactor in order for the cells to grow. The estimated cost of this entire surgery is $450,000. The advantages of the artificial trachea compared to the cadaver one include being custom fit and no anti-rejection drugs required [7].

Procedure and Side Effects

In order to create an artificial trachea the patient is first imaged by a CT scan. This is so the tissue engineers can make a scaffold that fits perfectly within the patient’s body. The scaffold is then made from nano-sized PET (polyethylene terephthalate) fibers using these specifications. Next, it is seeded with stem cells from the patient’s bone marrow by placing it in a bioreactor with transcription factors. These help force the stem cells to differentiate into trachea-specific cells. These cells then grow and divide to produce cartilage around the scaffold after 2-3 days. Finally, it is surgically implanted by suturing it the patient’s throat and lungs. The estimated cost of this entire surgery is $450,000 [7].

As for side effects it appears that there is low risk of rejection due to using the patient’s own stem cells. Because of this, recipients of this procedure haven’t been given any type of anti-rejection drugs. However, with any type of foreign object in the human body there is always some chance of rejection, so the patient should watch for any similar symptoms. Along with this, it seems that there is a long recovery with a transplanted trachea. One patient was doing “well” after four months and was able to walk 500 meters without stopping [7,8].

As for a regular trachea transplant from a cadaver, it appears that there are a few extra disadvantages. First off, there is a much greater chance of rejection due to the transplanted trachea from a cadaver. Although they chemically strip off the cells from the donated trachea, it still has a high chance of rejection which requires expensive medication. In addition to this, it is a lot harder to find a transplant match due to varying trachea sizes. With this in mind, the artificial trachea will be more beneficial and have a higher potential to save lives since it can be custom fit. However, the first child to be given a new trachea used a donor trachea combined with his own stem cells. In this procedure they continued to add growth factors after it was introduced to promote growth and save time from growing the cells outside the body. In the end he was able to be taken off the anti-rejection drugs and it has even grown 11cm (18 months after the procedure) [2,14]!