The artificial heart is a replacement of the human heart, in the form of a device, which performs the functions and processes involved with the heart. In particular, by utilizing the fluid mechanic properties of the heart, doctors and researchers have been able to produce systems that are used to either allow for a transition phase for a patient without a donor or for the use as a permanent replacement. Unlike stents or other vascular devices intended on repairing functionality of a human heart. Artificial hearts offer a new system, which is powered by an outside source. The circulation of blood and opening of valves is mechanically controlled and is powered by a battery pack, which keeps all mechanical parts moving. It is also important to note that unlike a human heart, where flow rates can be adjusted by activity or nerve impulses, the artificial heart utilizes special controllers to calibrate itself for the tasks to stimulate blood flow movement.

With a tremendous lack of organ donors and a massive demand for heart transplants due to health complications, the need for replacement alternatives has become ever more pressing. The timeline below illustrates some of the advancements of this technology. It is important to note that this technology is relatively novel. 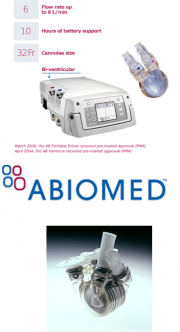 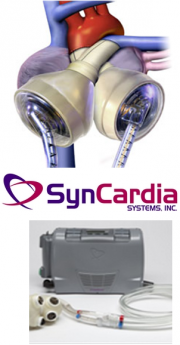 1952: Dodrill-GMR Machine is used on a patient to restore patients breathing pattern. Considered to be the world’s first mechanical heart. 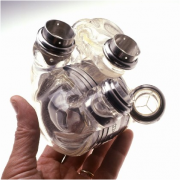 This is the Jarvik Heart. Also known as Jarvik 7 [5]

1967: The First Heart Transplant in the world.

1969: First Artificial Heart Transplant, remains on transplant for over 64 hours.

1973: Implants of Jarvik 5 are implanted in bulls and cows.

1982: Jarvik 7 is implanted into a patient by FDA approval and supervision.

1994: First Heart Assist system is introduced to a patient.

2008: Testing for Total Artificial Hearts with Biosensors progresses in the US, EU and Japan.

The Dodrill-GMR is the first mechanical heart, developed by Dr. Forest Dewey Dodrill, a surgeon at Harper University Hospital in Detroit. Engineers from General Motors, using stainless steel, glass, and rubber created the device itself. The Dodrill-GMR was first used on a human in 1952 for a open heart surgery on Henry Opitek. The surgery itself lasted 80 minutes, and the device was used for 50 minutes.

The heart-lung bypass machine, also known as cardiopulmonary bypass, is the first case of an artificial heart, designed by John Hevsham Gibbon. The device is capable of replacing the heart and lunch actions during surgery; it was in fact used on a human for the first time in 1953. The hear-lung bypass machine functions by receiving deoxygenated blood from the body, and oxygenating it before introducing it back into the aorta for the body to distribute the blood throughout the body.

The Jarvik 7 is the first device to function as a natural heart, invented by Robert Jarvik, MD. The artificial heart has two pump that are air-powered, and have 40-120 beats per minute. The Jarvik 7 was used for the first fully synthetic heart transplant in 1982, in which the patient survived for 112 days (longest patient survived 620 days in 1985). The Jarvik 7 requires a large hospital driver to power it, and to control the pump rate, and pumping pressure. [16]

With over 50 years in development of the device, and millions of dollars in funding, the Artificial heart has made progress and is being approved for civilian use by the FDA and other health related ministries and authorities around the world, including the EU, Canada and Japan. In this, the functionality of the artificial heart has been identified as the use of mechanical hydraulic systems used to flow blood in a similar fashion to that of a human heart. In particular, researchers such as Dr. Robert K. Jarvik, an inventor of the Jarvik Artificial Heart (shown left) [7], utilized theories of fluid mechanics and the inner workings of the heart to create a system with the ability to move de-oxygenated blood through the device and circulate oxygenated blood [6]. From this research, multiple companies have emerged to further this development. Two of these companies include Abiomed and SynCardia [1].

AbioMed is a company founded in 1981 with the objective of producing artificial organs including the heart and kidneys. Located in Danvers, MA, with over 400+ Employees, both in the United States and Europe, AbioMed produced the first total artificial heart where the electronic components of the power system were located inside the body.

SynCardia is a company based in Tucson, AZ, that is focused on producing artificial organs, including the heart. In taking over Symbion, a company founded by Dr. Robert Jarvik, the Jarvik 7 or renamed CardioWest is one of their main devices that was implanted into patients for the use as an artificial heart. In its trials and experiments, 79% of patients who received the implant, survived. These test trials were conducted in a 10 year period.[12]. In addition, SynCardia has been involved in developing power systems for the heart to power the heart and trying to introduce portability to its systems by developing the freedom driver system. [12]

AbioCor is the first completely self-contained heart. Approved by the FDA under the Humanitarian Device Exemption (HDE), meaning that AbioCor can only be used to treat up to 4,000 patients in the U.S. per year. The device consists of a thoracic unit, internal controller, internal rechargeable battery, and transcutaneous energy transmission (TET) technology. The batteries are wirelessly charged using TET, diminishing the chances of infection. The internal batteries last 4 hours, while the internal batteries last 30 minutes. AbioCor lasts from 2 to 5 years and it is made from titanium and angioflex. [17]

The Total Artificial Heart is powered by an external battery, known as a driver that controls the pump rate, and pumping pressure of the device. The drivers typically weight 418 pounds and are only located in hospitals, but SynCardia devised a portable driver known as Freedom Portable Driver. The Freedom Portable Driver is not FDA approved, but the first patient was released from the hospital in March 5th 2012. The portable driver only weights 13.5 pounds and can be carried as a backpack while it controls and powers up the Total Artificial Heart. [18]

The Beatless Artificial Heart is more reliable because it will wear out less in comparison to other devices. The reason for this is that the device has no moving parts; a normal heart beats 100,000 times a day and so an artificial heart needs to be able to perform to that level which means there’s a lot of moving parts that will wear out. The Beatless Artificial Heart is made of fiberglass, silicone, and dacron. [19]

In recent years, the modernization of technology has allowed systems to become more efficient and more effective. With the elaborate research being done on making the power source better, it has allowed for greater patient mobility. The main reason is that twenty years ago, the ability to move while having a large backup battery with you at all times was very difficult. In addition, the effectiveness of batteries has allowed power sources to hold a charge for a longer period of time, allowing the heart to be on more often. Furthermore, this research has allowed for a change of materials of the system to produce a system which is lighter, smaller and can thus be used for patients who are smaller than average. In addition to prevent risks of infection or disease, new systems will have biosensors to be able to adapt to the environment it is in. An example of this progress is the AbioCor II, which will be approximately 30% smaller, more durable, and longer battery lifetime.

With this considered, the preservation of the heart has also been extensively studied by using Heart Assist machine. Heart assist systems assist the heart in carrying out certain functions, such as effective movement of de-oxygenated blood into the lungs.

Artificial hearts have had complications related to immuno-response by the system. It should be noted that patients have died due to infections as well as weakness of the immune system post surgery. It should also be noted that in the past 50 years, survival rates have been variable based on the type of device as well as its material properties and the specific case of the patient. Diseases or illnesses that can be contracted during treatment or surgery include pneumonia, high fevers and multiple organ failures [7].

Artificial hearts have had difficult times adapting to their environment. It should be noted that the heart system sets an independent flow-rate for the pump inside the artificial heart, where as neuronal signaling influences the current beating rates, therefore a risk that many scientists are currently trying to alleviate is the system of the controller. Currently, there are systems that can adjust the flow-rate of the vessel based on the exercise attempted. For example, a person who may decide to take a walk or stroll will require a faster heart rate than someone who will be sitting down. These things have to be adjusted accordingly in order to avoid complications.

[19] “Texas Man Pioneers Use of Beatless Heart, the Wave of the Future” ABC News. http://abcnews.go.com/Health/texas-man-pioneers-beatless-heart-wave-future/story?id=13838596&page=2