Refactoring is a procedure in which a natural genetic circuit is reduced to its basic parts and then reassembled into new functional devices in E. coli. 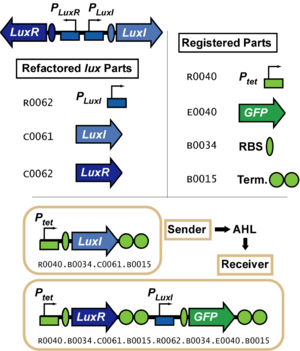 Nature has provided us a wealth of basic parts for the construction of genetic devices that “work” at least in their native host. The problem is transitioning from the metagenome of raw sequence data to a functioning device in E. coli. Refactoring is the starting point for developing a standardized method for this conversion. By separating a system into its regulatory and biochemical parts, we learn about how natural systems are constructed, and can re-regulate and optimize them for new applications.

Many examples of refactoring have already been implemented. Refactoring the lux quorum circuit of Vibrio fischeri gave us the basic parts for the sender/receiver systems at the core of the pattern-formation devices described by Weiss and coworkers. Additionally, many chemical synthesis pathways have been refactored for the production of terpenoids, polyketides, and biopolymers.

The figure at right illustrates the principle of refactoring. We begin with sequence and biochemical information about a natural system. In the case of lux, we can readily identify the open reading frame sequences present in the circuit. It's more difficult to identify the boundaries of the promoter and rbs parts. For well studied systems like lux, it's usually possible to extract this information from various molecular biology studies. All we want from the natural system are the non-trivial basic parts. Lux has ribosome binding sites, but there is nothing interesting or special about them, so there's no particular value to refactoring those parts. We have 3 useful basic parts in this circuit--the two open reading frames and the promoter driving luxI.

The next step is to make biobrick basic parts derived from the lux system. So, we'll use PCR to clone the sequences into Biobrick plasmids, and confirm that we've made them by sequencing. Now, we can reconstruct a system with the same behavior as lux, but now with refactored and standard parts. To reconstitute lux, we'll need some standard rbs's, terminators, and promoters, but we can string this together and make something that had the same the properties as the original circuit.

The reason for doing this is two-fold. First, there may be undesirable properties in natural circuits that can be "fixed" by refactoring. For example, say there was an additional high-temperature repression element present in lux (which there is). By refactoring, it might be possible to delete this element while preserving the quorum activity of the complete system. Second, we could make related-but-different circuits out of the system. We could, for example, replace the promoter portion of lux with other promoter parts that produced different rates of transcription. In this way, we might create families of lux-derived devices that produce different strengths of output. And finally--and this is the big one--we can make other devices from these parts that have activities distinct from the original circuit. In the lower portion of the figure, the refactored lux sender/receiver system developed by the Weiss lab takes the basic parts of the lux circuit but uses them in a new way. The result is two cells that communicate with one another through secretion of the quorum signal, acylhomoserine lactone.

If you have any comments or want to report a potential error in the tutorial, please email me (Chris Anderson) at JCAnderson2167-at-gmail.com