Administration of Spiradoline to Mice Expressing RASSLs Ro1 or Ro2

Administration of Spiradoline to Mice Expressing RASSLs Ro1 or Ro2 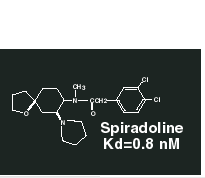 Spiradoline is commercially available chemical structure of spiradoline Spiradoline can be purchased from Research Biochemicals International (RBI: 1-800-736-3690 fax: 1-800-736-3690, www.callrbi.com, Spiradoline is product #U-106 on page 347 of the 1998 RBI catalogue, and is $32 for 25 mg, which should be enough for about 12 maximal doses. RBI is now a division of Sigma-Adlrich, so in the future this product might be in the Sigma catalogue. Spiradoline was first made by Upjohn (now Pharmacia-Upjohn), and was called U-62066 before it was named spiradoline in clinical trials (it is referred to as U-62066 in the RBI index).

In humans, it had disappointing results since it did not provide the analgesic effect that they had hoped. In fact, it seems that the investigators kept pushing the doses of spiradoline higher and higher in hopes of getting analgesia, and several patients reported dysphoria and hallucinations at the higher doses. Otherwise, the drug appeared quite safe at the lower doses. We have used Spiradoline to regulate heart rate in mice expressing Ro1 in the heart. To measure heart rate and waveform, we implanted cardiac telemetry units into mice expressing Ro1 and administered the k opioid receptor agonist spiradoline to activate Ro1. Intraperitoneal (i.p.) administration of spiradoline at doses of 1x10-7 to 1x10-5 mol/kg (0.05 mg/kg to 5 mg/kg) caused a dose-dependent decrease in heartrate (Fig. 4 a in the single mouse depicted in Redfern et al.). In other unpublished experiments we found that approximately 50% of the mice died (perhaps of respiratory failure) when we gave 1x10-4 mol/kg, while all the mice survived when we used 1x10-5 mol/kg (which is why this was our maximal dose. We have not tested these high doses in k-receptor KO mice, but we anticipate that it will not have these side effects.

No further notes available at this time

There are no further references at this time