Piezoelectrics is a method that can be used to drive active mixing in microfluidics. Objects become piezoelectric when a mechanical stress acts upon a solid object (usually crystals) and a charge is formed within the solid object. The term "piezoelectricity" has the actual meaning of electricity resulting from latent heat and pressure. In the world of microfluidics, piezoelectrics are used as ultrasonic mixers or actuators to combine two or more fluids within a device. Piezoelectrics are also used in microrobotics, non-invasive medical diagnostics, radio transmitters, microphones, and microscopes. 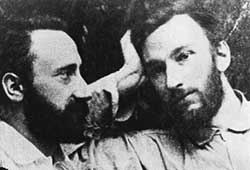 Piezoelectricty was first founded by French physicists Pierre and Jacques Curie in 1880. As noted above, piezoelectricity occurs when a solid object (crystal) is either distorted, compressed, or twisted (stresses) and an electric charge is formed in the object. Piezoelectric objects can also work in the opposite sense, where a charge is implemented into the object and in response, the solid object distorts, bends, or compresses. The use of piezoelectric objects is usually done at the nanoscale level [1]. The piezoelectric material is usually combined with a metal in mixing devices since the metal is able to conduct the charge of material and transmit it. It is also known for being extremely simple and promoting mixing and flow between fluids [3]. Common types of piezoelectrics include quartz, barium titanate, lead titanate, lead zirconate, and lead zirconate titanate [2].

Piezoelectric objects are used in numerous types of processes. Quartz is used as a frequency reference crystal for radio tramsmitters, while barium titanate can be used as a ultrasonic transducer. Lead zirconate titanate is used for medical imaging processes, and other types of objects have been used for atomic force microscopy (AFM) [2]. These objects are used because they have the ability to reach high electric fields, but also maintain low voltages.

The primary piezoelectric method for active mixing in microfluidics is the use of piezoelectric actuators. Piezoelectric actuators are usually integrated on a microfluidic chip to help initiate the mixing between the fluids at hand. The piezoelectric actuator acts as an ultrasonic micromixer with frequencies usually greater than 60 kHz. Actuators have been used particularly to excite air bubbles in a channel of flow. They have been shown to excite the air bubbles to peak excitation, which rapidly sped up the mixing process [5]. Another example of piezoelectrics for air bubble mixing is the use of a piezoelectric transducer in a horseshoe shape within a channel. The fluids flowed around the channel with bubbles getting stuck within the opening of the horseshoe. The transducer thus, used acoustic waves to excite the bubbles to its resonance frequency and instantaneously establish homogeneous mixing [6]. 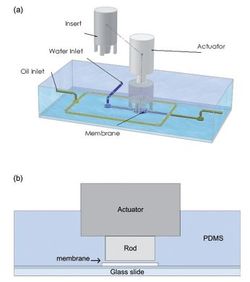 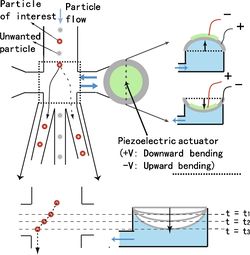 Numerous other studies have been done using the piezoelectric devices for mixing. A study in Portugal was conducted to see if a piezoelectric transducer improved the mixing of two fluids within a well plate. Two different well plates were used to mix the fluids, but only one was subject to the acoustic waves from lead zirconate titanate. The results showed that the well plate with the lead zirconate titanate did achieve more rapid and efficient mixing [7]. Another example of where a piezoelectric device was used for mixing was as a microfluidic drop generator. As shown in Figure 2, the piezoelectric actuator is placed on a chip where the actuator converts voltage into mechanical transformation of the object, which thus allows for the accurate volume of the droplet to be formed. Uniform droplets were obtained with any size, frequency, and distance being able to be achieved [8].

A piezoelectric actuator has also been used as a microfluidic cell sorter. The actuator is placed on a chip and by its mechanical bending allows for the fluid to be transversely displaced. With the fluid being transversely displaced, when a particle enters the sorter, the drag force from the fluid forces the particle into a proper compartment instead of falling directly down the channel which is shown in Figure 3 [9].

Advantages and Disadvantages of Piezoelectrics

4-This Month In Physics History [4]