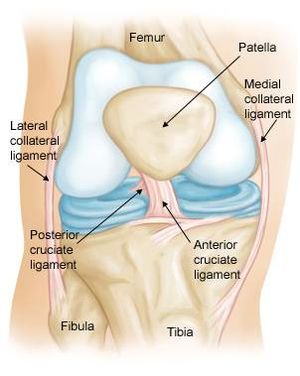 Source 2: General depiction of the ligaments in the knee.. 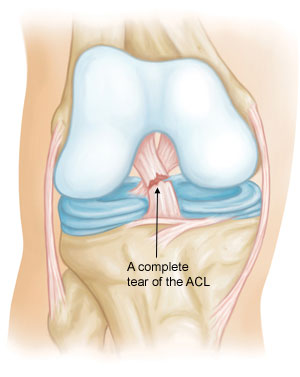 Source 2: Depiction of a tear in the Anterior Cruciate ligament..

Anterior cruciate ligament reconstruction (ACL reconstruction) is the process by which a tissue graft is inserted into the place of the anterior cruciate ligament in order to replace the functionality of the torn ligament. The ACL injury is one of the most common knee injuries with around 95,000 tears a year. Of those 95,000 there are about 60,000-75,000 reconstructions performed annually in the United States [1]. The ACL, which is located in the middle of the knee, helps to connect the tibia (shin) to the femur (thigh). The functionality of the ACL is to keep the tibia from sliding in front of the femur, as well as giving rotational stability to the knee [2]. The other crucial ligaments located in the knee joint consist of the lateral collateral ligament (LCL), posterior cruciate ligament (PCL), and medial collateral ligament (MCL). Although the most common cause of an ACL tear is athletics, 70% of the injuries occur through non-contact mechanisms such as decelerated running, jumping, or cutting. The remaining 30% of the injuries occur as a result of contact with another object [2]. The procedure to reconstruct the ligament is done through arthroscopic knee surgery. An endoscope, or small camera, is inserted into the patient’s knee through a small incision, and the doctor performs the surgery through the image that is projected.

Damage to the ACL

There are three primary types of ACL injury [19]:

A Grade I or Grade II sprain can recover without surgery with a combination of rest and physical therapy, although there are some therapies available to aid the healing process. A Grade III sprain will not recover without surgery, but if the patient develops strong leg muscles to stabilize the knee and limits physical activity that could cause further injury, surgery can be avoided.

1895 – A.W. Mayo Robson (UK) performs the first cruciate ligament repair on a 41-year-old patient. The torn ligament was stitched into position at the femur. [3]

1917 – Ernest W. Hey Groves (Ger.) performs first successful ACL replacement by connecting iliotibial band was connected from the femur to a hole placed in the joint. [3]

1921 – Dr. Eugene Bircher become first doctor to perform arthroscopy of the knee on a live patient. [4]

Duke University’s information regarding ACL reconstruction clearly outlines the general steps involved in replacing the ACL with a suitable graft [20].
Small incisions are made in the front side of the knee on each side of the patellar tendon. The surgeon inserts an arthroscopic camera into the incisions to view the current state of the torn ACL, as well inspect for other damage such as broken bone, other torn ligaments, or torn meniscus. With the knee bent to approximately 90 degrees the torn ACL is removed from the patient. A single large guide pin is driven through the tibia and the femur diagonally, at an angle that will give the graft the same functional angle as the original ACL. Using the guide pin for reference, holes are drill through the tibia and femur to act as channels that the graft will reside in. The graft is attached to the guide pin and pulled through the holes, starting with the tibia and ending in the femur. The graft is then secured into place using the method deemed best by the operating surgeon. 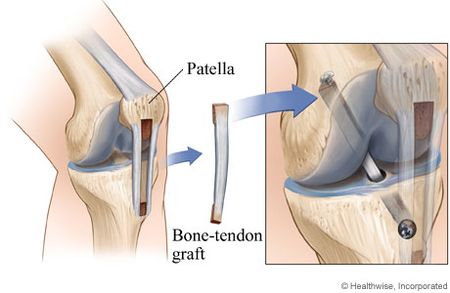 The most common type of reconstructive surgery uses the patellar tendon as a tissue graft. The patellar tendon, located at the front of the knee, connects the patella (knee cap) to the tibia (shin). In order to harvest the graft, a 3-4” incision is made along the front of the tendon, and the middle third is removed (10-11 mm), with 2 cm of bone blocks at each end. One bone block is harvested from the tibia tubercle, while the other is obtained from the patella, and the bone at each end of the graft is screwed into the tibia and femur respectively. This autograft is considered to be more stably anchored because of the bone-bone interface, which is more sturdy, and heals quicker than a tissue-bone interface would. [2][5] This method of ACL reconstruction is proven to be reliable, as the rate of failure of the patellar tendon autograft is only about 5%. Additionally, studies have also shown that the patellar tendon occasionally will regenerate, or grow back after part of it is removed. [2][6] While this choice of tissue graft may seem to be ideal because of the low failure rate, it does come with complications. This procedure is more invasive than some of the other graft options, because it requires a second incision that needs to be made along the front of the patella. Furthermore, many patients experienced an increase in pain behind the kneecap especially when kneeling, as well of an increased risk of tendonitis in the patellar tendon. 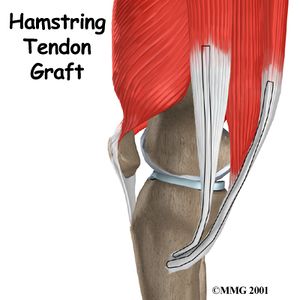 Although there are several variations of hamstring tendon grafts, the most common are performed by using the semitendinosous hamstring and gracilis tendons, located on the inside of the knee. In order to reconstruct the torn ACL, this tendon is screwed into the femur and tibia at their respective ends. The advantage to using the hamstring autograft, is that it is significantly less invasive than the patellar tendon autograft. The hamstring graft is harvest using the arthroscopic equipment already in place, so there is no need for further incisions to gather the tendon. However, this tissue-to-bone interface is less sturdy than that of a bone-to-bone interface used in the patellar tendon graft, so proper healing times may be increased from 2 to 8 weeks. [2][5][17][18] This method of reconstruction has begun to rise in the past decade due to the increased research in the graft fixation techniques. Recently new screws have been developed with specific threads that do not cut the hamstring tendon. This allows for the tendon to be screwed in and fixed within the bone tunnel. [5] 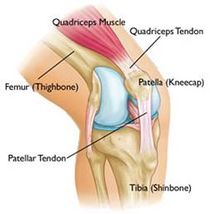 The quadriceps tendon is often used for ACL revision surgery. The quadriceps autograft is a hybrid-like variation of the hamstring and patellar tendons. The harvesting of the tendon is performed by making a horizontal incision just above the knee cap. Much like the patellar tendon autograft, the quadriceps autograft is harvested with a bone plug from the patella, which makes it easy to fixate in place of the ACL. Typically, 5 cm of the quad tendon is removed, and the 2 cm of the bone plug is fixed into the femur with a screw. However, at the opposite end of the tendon, no bone plug is harvested, and so the tendon needs to be fixated to the tibia similarly to the hamstring tendon. Even though the harvesting of the graft requires a piece of the patella to be removed, the harvesting of the bone is performed at the upper pole of the patella, making it possible to obtain a graft even if a patellar tendon autograft was previously performed.[2][5][7] 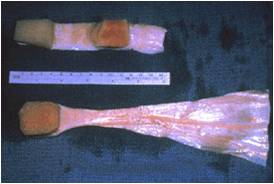 An advantage of choosing to use an allograft, is that there will be no pain or scaring from a donor site, since the graft will be chosen from a foreign source, most likely a cadaver. Again, since the patient is not contributing the donor site, this procedure is the least painful. The most common types of allografts used include the hamstring, patellar, and Achilles tendons. These tendon reconstructions are performed identical to that of the autografts. Allografts are typically used as a method for ACL reconstruction revision, where the previous reconstruction has failed. The autograft is considered to be more desirable during the first reconstruction, because doctors hesitate to introduce a foreign source into the body in order to avoid a higher risk of infection, or viral transmission (HIV, AIDS, etc). Allografts tend to have a higher graft failure rate, which ranges from 23%-35%. Allografts may be used when there is a need for simultaneous reconstructions of ligaments, because of the possible lack of sufficient donor sites. [2][5][8]

The most desirable type of graft used for ACL reconstruction would be to use a synthetic graft. A synthetic graft would remove the requirement of using a patient’s donor site when using an autograft, as well as remove the possibility of viral transmission which is the concern with allograft use. 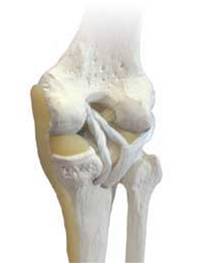 The initial synthetic ACL grafts were made out silk in 1903, and later of carbon fibers, with the first synthetic carbon fiber ACL reconstruction procedure occurring in 1981. However, these proved to be unsuccessful. In 1986, a new synthetic material was made out of polytetrafluorethylene (PTFE), which was a material already being used in vascular surgery. A single strand of this material was wounded into multiple loops, and became to be known as the “Gore-Tex ligament.” Although the FDA approved the use of the synthetic ligament, it was only approved as a means of revision surgery. While some studies supported the use of the Gore-Tex graft, the mechanical properties of the graft were soon found to be unsuitable, where there was no tissue ingrowth, and a presence of wear debris. The Gore-Tex graft was withdrawn from the market in 1993, and the use of the material had been abandoned in ACL reconstruction surgery. [5][9] There have also been a number of other synthetic graft types which include: polyester, polypropylene, and polyethylene terephtalate. This polyethylene terephtalate graft, known as Ligament Advanced Reinforcement System (LARS), is the forefront of new developmental synthetic grafts. These ligaments are made so that structure allows tissue ingrowth in the intra-articular part, thereby helping the healing process and creating a stronger and more reliable synthetic graft. [9]

Source 11: A close-up of a bioabsorbable screw is shown..

The future of ACL reconstruction lies in the development of a reliable synthetic graft. The LARS ligament is on the right path, however, in order to succeed, tissue engineering should provide a functional and biologically valid ACL, able to promote a continuous tissue remodeling. [9]

Another important development deals with the fixation of the grafts. One of the issues that lies in using a hamstring graft, is that the screw used to keep the tendon in place, many times ends up actually harming the structural integrity of the tendon. A new development in “interface screws” threads, have been made so that the tendon does not get damaged by the screw. Another development in screw technologies, includes bioresorbable screws, which will absorb into the body after 2-3 years. This same technology can also come impregnated with hydroxyapetite, a bone growth stimulant, which will encourage bone growth into the graft placement. [5][11]

Further research also lies in the development of an extracellular matrix (ECM) based scaffold that is implanted with autologous platelets. Studies have found that this extracellular matrix–based scaffold combined with autologous platelets stimulated functional healing of the ACL. With continual engineering and research, ACL reconstruction may be accomplished without the need of a graft. [10]

One of the primary causes of ACL failure has traditionally been detachment of the replacement ACL from the bone surface (referred to as pull out) due to sub-optimal bone tunnel healing [21]. To combat this issue new cements, growth factors, and stem cells are being researched to determine better ways to improve the reconstructed ACL surfaces. In animal tests brushable calcium phosphate (CaP) cement, injectible CaP cement, porous Cap, bone morphogenic protein-7, and stem cells were introduced to the recovery site of several animal patients after ACL surgery. The increase in ACL strength in comparison to a control group was 118%, 110%, 116%, 77% and 122%, respectively. In several of these cases the mode of ACL failure change on average from pull out to ruptured ACL, signifying that these methods may be adapted to humans for stronger repairs.