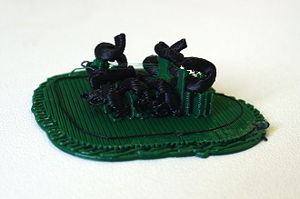 Printing ABS with PLA has the advantages that PLA but not ABS dissolves via acid or base-catalyzed hydrolysis. You can avoid laboriously peeling support of your model. ABS and PLA don't stick to each other as much as PLA on PLA. This is good if you do choose to remove support manually but it also means that ABS occasionally won't stick on PLA or vice versa where it is required. You will have to adjust model design by creating more support. 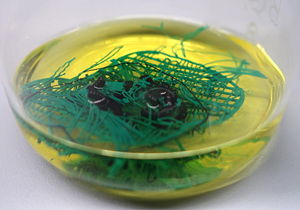 In the test model of insulin below you can see adhesion issues of the black ABS on the green PLA support material towards the bottom of the model.

PLA support under ABS is worse than PLA under PLA. The above model prints well with the latter. Adhesion between ABS and PLA is apparently too low for thin support structures. Even on the raft (the platform in green) ABS does not stick well. It is better though than HIPS and ABS. 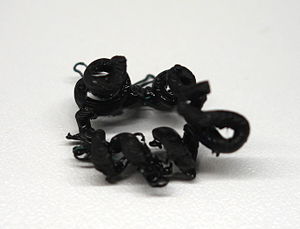 I tested PLA removal in 5M (mol/L) NaOH over the weekend at room temperature. All finer structures including the support were completely dissolved. The raft had detached from the model and only a few longer strands of it were still visible (see right).

Below is the final ABS model of insulin after PLA support removal. It's a view from the side. Higher levels of the molecules printed well as it was ABS printed on ABS. Lower levels, however, suffer from the weak adhesion to the PLA support as shown by several misplaced strands of ABS.