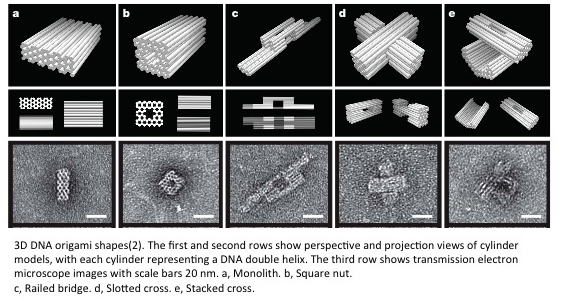 Deoxyribonucleic acids (DNA) are polymers made from monomers called nucleic acids. Nucleic acids are composed of the sugar deoxyribose with a 5’ triphosphate group and one of four nitrogenous bases (Adenine, Thymine, Guanine, or Cytosine). Two DNA strands can hybridize if their nitrogenous bases hydrogen bond. Guanine forms three hydrogen bonds with Cytosine and Adenine forms two hydrogen bonds with Thymine. The width of a double stranded helix in B-form is 2 nm. There are 10 to 10.5 nucleotides per helix turn with each nucleotide separated by ~3.4 angstroms.

DNA strands are assembled by slowly decreasing temperature until the DNA strands have found favorable energetic interactions. You can predict the critical temperature, called the melting temperature, at which half of the DNA molecules are hybridized by the amount of complementarity between two DNA strands. You do this by calculating the change in free energy of the reaction due to hydrogen bonding and entropy change of the system- although it is not that simple because cooperativity and volume exclusions effects play major roles in DNA assembly.

While the same DNA assembly method is used by everyone in the field, the architecture of the patterns differ and determine the pixel resolution, pattern size, precision, and accuracy. Precision and accuracy of the pattern are not measured in this field. Rather, the amount of defect free patterns over the total number of patterns is measured as yield. There are always many left over DNA strands that are washed away with this measurement. Here are some of the architectures I found:

There are two major computational tools to design and simulate your DNA origami: