From OpenWetWare
Jump to navigationJump to search
20.309: Biological Instrumentation and Measurement

Most of the material here was excerpted from this page, this page, and this page. Go there for further reading, or check out the Wikipedia article. Finally, a highly recommended paper discussing a little more detail about diode physics was recently published in the American Journal of Physics. 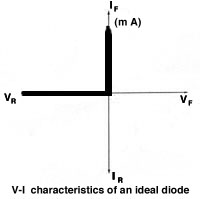 Electrons use up a little energy pushing its way through the diode, rather like a person pushing through a door with a spring. This means that there is a small voltage across a conducting diode, it is called the forward voltage drop and is about 0.7V for most diodes which are made from silicon. This forward V drop can vary for various other types of diodes, especially LEDs. The forward voltage drop of a diode is almost constant whatever the current passing through the diode so they have a very steep characteristic. So, our idealized i-v characteristic is slightly modified (note that even in the forward conducting region, the diode i-v curve has a very steep but finite slope, which means that there is a small resistance in forward bias):

When a reverse voltage is applied a perfect diode does not conduct, but all real diodes leak a very tiny current of a few [math]\displaystyle{ \mu }[/math]A or less, which is nearly constant over a large range of reverse voltage. This can be ignored in most circuits because it will be much much smaller than the current flowing in the forward direction. However, all diodes have a maximum reverse voltage (usually 50V or more) and if this is exceeded the diode will fail and pass a large current in the reverse direction, this is called breakdown. We don't need to worry about breakdown in 20.309, but you should know that it exists. 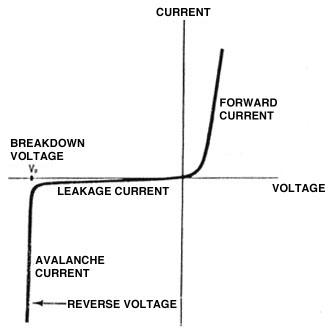 A circuit model that takes into all of the above effects into account, but still uses idealized circuit components takes the following form [1]:

These devices work very similarly to standard semiconductor diodes, except that forward current passing through them causes light emission. LEDs that are packaged individually look similar to the figure below. The cathode (–) lead is typically shorter, and the LED package has a small flat next to that lead.