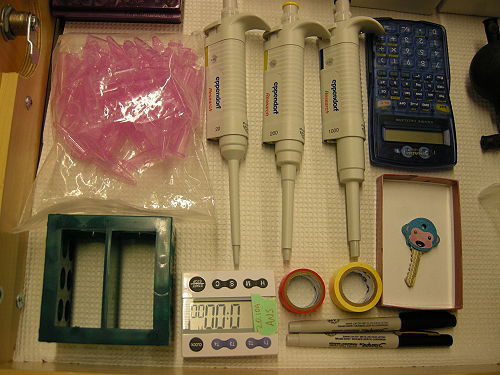 Contrary to how it may be taught in some laboratory classrooms, the process of scientific inquiry encompasses much more than the collection and interpretation of data. A key part of the process is design – of experiments that specifically address a hypothesis and of new materials or technologies. Moreover, any design is subject to continued revision. You might redesign an experiment or tool based on your own own research, or you might consult the vast body of scientific literature for other perspectives. As the old graduate student saying goes, “A month in the lab might save you a day in the library!” In other words, although the process of combing the literature can be arduous or even tedious at times, it beats wasting a month of your time repeating experiments already proven not to work or reinventing the wheel.

During this module, each of you will design and test a modification to a biological system. The parent system is a light-based edge detector genetically encoded in bacteria. You may be wondering why on earth such a thing would exist! The edge detector is not a product of nature — not entirely at least — but one of synthetic biology. Scientists in this relatively young field aspire to reliably program cells to carry out arbitrary functions. (Where by arbitrary I mean "unconstrained" rather than "capricious," though sometimes both apply.)

The edge detection system comprises several sub-systems that we can call modules. Taking a modular approach is useful in programming biology, just as it is in programming computers. To understand how the complete system works, it may be helpful to examine these modules one at a time, as well as to discuss a similar system that detects and copies an entire image rather than only its edges. In both systems, the final output is a black precipitate created when beta galactosidase (β-gal) cleaves 3,4-cyclohexenoesculetin-b-D-galacto- pyranoside (S-gal). A number of genetic elements control when and whether β-gal is produced.

The original bacterial photography system was described in 2005 by Levskaya et al. in the Voigt lab. In this system the gene lacZ, which encodes β-gal, is under the control of the ompC promoter. We will discuss how this promoter works in detail later on; for now, you need only understand that in the presence of red light the promoter is off, and in darkness it is on (producing β-gal). The genetic circuit depiction of the system is below. Note that besides a light-sensitive ompC promoter, the bacteria also carry plasmids for making an accessory light-sensing protein called phycocyanobilin (PCB). 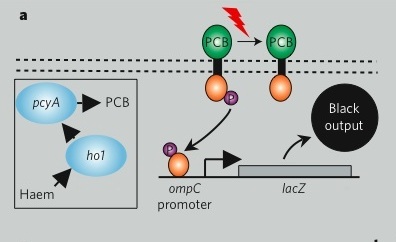 Genetic circuit for bacterial photography system, from Levskaya et al. Note that the promoter is on when phosphorylated, which happens in the dark. You don't need to understand all the details of how this promoter works today.

These genetically engineered bacteria can be grown in a special medium containing a source of ferric ion along with S-gal, a synthetic analogue of the natural substrate for β-gal that produces a black precipitate. Thus, when a black-and-transparent mask is placed over a Petri dish containing these genetically engineered bacteria, a black precipitate is formed by the bacteria under the dark part of the mask, but not by the bacteria under the transparent part. An example of such a mask and its corresponding bacterial photograph is shown below.

In the edge detection system, described by Tabor et al. in 2009, lacZ is not directly under the control of PompC, but is separated from it by an intermediate module. Now when PompC is on, it drives expression of both luxI and cI genes. Meanwhile, luxR is constitutively expressed. Again, we will discuss the details of the biology later on, but for now you should understand the following: luxI makes AHL, a diffusible signal that together with LuxR protein turns on the hybrid lux-lambda promoter (Plux-λ); cI makes a (non-secreted) protein called lambda repressor that dominantly represses Plux-λ; finally, Plux-λ controls lacZ expression. The diagram below depicts the genetic circuit. Now, what does all this mean for bacteria growing below a photomask?

Bacteria that are in the dark produce both AHL and lambda repressor, but due to the latter’s dominant action do not produce β-gal. Bacteria that are in the light produce neither AHL nor repressor, and thus are free to respond to the AHL produced by cells in the dark. So long as the AHL only has time to diffuse to the light-dark border, a crisp black line is produced there, hence detecting and copying the edge of the image. In reality, some background β-gal production may occur in other regions of the plate, though it is strongest at the light-dark border. Below is an edge detection image made using the mooing turtle mask. Note the reversal of light and dark areas, and the somewhat pronounced darker edges. 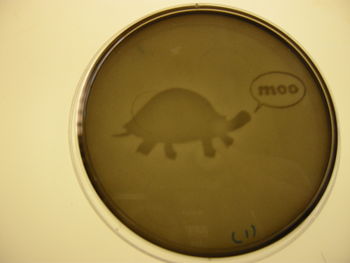 Today you will spend much of your time getting intimately familiar with the edge detection system, along with a derivative system that is responsive to a small molecule rather than to light. To get a physical sense of what will otherwise be a very abstract couple of days, you will gather some data about these two systems. You will prepare an edge detection plate today and see the poor contrast of the original (light-based) system for yourself next time. Note that plating cells on solid media is materials-intensive and that β-gal production in the plate is not easily quantifiable. Growing cells in liquid culture allows for easier and more reproducible quantification. However, cells that exist just on the light side of the light-dark border in the plate must be approximated in liquid culture by exogeneously adding AHL. In your case, you will prepare liquid cultures for the derivative (IPTG-based) system under four conditions, and compare the results you get next time to the truth table you are given today.

To prepare for designing a modification to the edge detection system, you should first refresh your memory (or take a crash course in) genetic control elements. You want to understand the functions of promoters, operators, and ribosome binding sites. One resource for learning about genetic control elements in the context of synthetic biology is the Registry of Standard Biological Parts. The registry was developed as one strategy to make routinely engineering biology feasible: just as mechanical and electrical engineers have access to defined parts that perform in predictable ways together, so should biological engineers.

You can learn the definition and basic structure of promoters and operators here, and learn more about promoter regulation here. Ribosome binding sites are described here and here. More detail about consensus promoter sequences is contained in the attached lecture notes from a class at Memorial University in Canada.

The truth table above is a high-level view of our system. It does not take into account the effect of leaky promoters, RBS of more-than- or in-sufficient strength, or mismatched elements. Consider how the following scenarios would affect your truth table. Write partially on states as (p) for partial, and again briefly explain your reasoning in your notebook.

In fact, the truth table for the edge detector system looks like the following. Explain what two problems the system appears to have. (Hint: two different elements are leaky.) Note that we only measured production of β-galactosidase, so AHLout is marked "nm" for not measured.

Get familiar with model (IPTG) system

We designed an auxiliary testing system to the edge detector that is sensitive to a small molecule - IPTG - rather than light. This system provides two major advantages. First, it is more tenable to work with a small molecule than with light, especially for multiple samples. Even the Voigt lab had to spend 5 days getting some crucial data for their paper (1 day per light intensity!), whereas we can readily test different IPTG concentrations in parallel. Second, and more crucially, this design allows us to isolate one system imperfection at a time, as you will see below.

The genetic circuit depiction of the IPTG-based system is shown below. Recall that lacI encodes the lac repressor protein, which turns off plac. In the presence of lactose or a small-molecule lactose analogue such as IPTG (isopropyl β-D-thiogalactoside), the repressor is prevented from binding to its associated operator, and the lac promoter is on. Note that placIq is a constitutive promoter.

Note that our model system is just a tool for fixing the original system. This limited utility is because the IPTG-sensitive system has no inherent spatial element; we cannot simply put a mask on the culture plate to create areas of no IPTG and +IPTG, the way we can for light and dark. (At least not as trivially! Of course we could imagine designing such a system.)

For homework you will begin to explore in detail one of the leaky elements that you identified above. Next time in lab you will design a modification to it in order to reduce leakiness.

Some media has been prewarming in the 42 °C waterbath for you. The media is traditional LB supplemented with ferric ammonium citrate and S-gal. When β-gal cleaves S-gal in the presence of iron, a black precipitate forms. The media also has agarose so it will harden as it cools; the low melting point of the agarose allows us to suspend cells in the media without killing them from excessive heat. All manipulations should be with your best sterile technique to avoid contamination of your cultures.