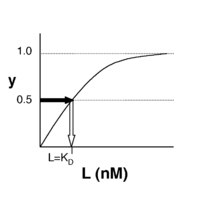 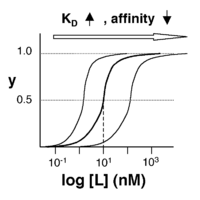 The figures at right demonstrate how to read [math]\displaystyle{ K_D }[/math] from binding curves. You will find semilog plots (bottom) particularly useful today, but the linear plot (top) can be a helpful visualization as well. Keep in mind that every L value is associated with a particular equilbrium value of y, while the curve as a whole gives information on the global equilibrium constant [math]\displaystyle{ K_D }[/math].

Today you will analyze the fluorescence data that you got last time. Begin by analyzing the wild-type protein as a check on your work (your curve should resemble Nagai's Figure 3L), then move on to your mutant samples. If you are not familiar with manipulations in Excel, use the Help menu or ask the teaching faculty for assistance.