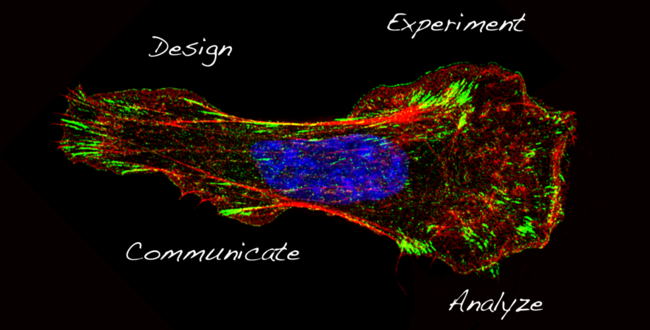 Today we will be imaging our nanocomposites via TEM to confirm that our fabrication last week was successful.

The Transmission Electron Microscope (TEM) enables 0.14 nm resolution by utilizing an electron beam rather than a light source as is used in optical microscopes. At this resolution, one can distinguish individual planes of atoms – making TEM an excellent materials characterization instrument. The visualization of single atoms allows one to determine many parameters that describe the structure of the material, such as crystal plane spacing. Additionally, TEMs can be equipped to perform energy-dispersive X-ray spectroscopy analysis (EDX/EDS/XEDS) or electron energy-loss spectroscopy analysis (EELS). The former, EDX, enables identification of the atomic composition of heavier elements in the material. EDX has limited detection of elements below sodium (Na) on the periodic table and no detection of elements below carbon (C). The latter, EELS, is most sensitive to lighter elements, typically from carbon to the 3d transition metals. EELS can reveal atomic composition, electronic properties of the valence and conduction band of a material, surface properties, and chemical bonding.

Although we will be using TEM for materials characterization, it should also be noted that TEM is used for the analysis of biological materials as well. Since the electron beam passes through the sample that is being examined, the sample must be sufficiently thin and sufficiently sturdy to be hit by electrons in a vacuum. Rather than imaging single atoms, biological samples display contrast of components via different densities. Areas of higher density show up as a darker color than areas of low density, creating a “shadow image."

How does a TEM work?

The principles behind transmission electron microscopy are analogous to the principles behind an optical microscope. Instead of light and glass lenses, however, the TEM utilizes an electron beam focused via electromagnetic lenses. Since the TEM utilizes an electron beam rather than visible light, the microscope must also function under a vacuum. This condition allows the electrons to remain traveling in a straight line because they have no air particles with which to collide.

Specifically, at the top of the column of a TEM, a high voltage electron beam is emitted by a cathode and focused via a condenser lens. Then the beam is transmitted through the specimen. The resulting image is then magnified through a series of electromagnetic lenses until it is recorded by a fluorescent screen or camera.

We will be imaging our phage nanocomposites via TEM. To prepare for TEM, you previously deposited your samples on a TEM grid. TEM grids can be made of many kinds of materials. Each design, however, includes lines of a conductive metal which disperses the electron beam and thereby prevents destruction of the sample from the harsh beam. Our TEM grids are composed of a copper mesh with carbon mesh is strung between the grids. Once a sample has been applied to our TEM grids, we will only visualize the portions of the sample contacting the carbon mesh, along with any imperfections in the carbon mesh itself.

We're fortunate to have an expert from Angie Belcher's lab who will visualize the TEM grids you prepared. We've reserved the 2100F by JEOL, which is located in the basement of the Koch Institute. Since the room that houses the instrument is small, we'll head over in two or more separate cohorts starting at about 1:15. When you're not at the TEM, you should be working with your lab partner on your research proposal.
Here are some examples of the kinds of images you'll get at TEM today: 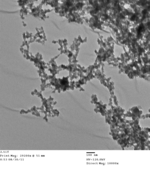 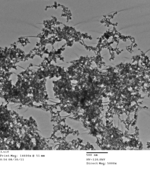 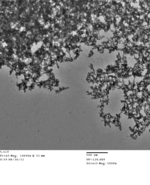 Before or after your TEM session today, take some time to discuss the five research results you wrote up for homework with your lab partner, guided by the instructions below.

Writing a research proposal requires that you identify an interesting topic, spend lots of time learning about it, and then design some clever experiments to advance the field. It also requires that you articulate your ideas so any reader is convinced of your expertise, your creativity and the significance of your findings, should you have the opportunity to carry out the experiments you’ve proposed. To begin you must identify your research question. This may be the hardest part and the most fun. Fortunately you started by finding a handful of topics to share with your lab partner. Today you should discuss and evaluate the topics you’ve gathered. Consider them based on:

It might be that not one of the topics you’ve identified is really suitable, in which case you should find some new ideas. It’s also possible that through discussion with your lab partner, you’ve found something new to consider. Both of these outcomes are fine but by the end of today’s lab you should have settled on a general topic or two so you can begin the next step in your proposal writing, namely background reading and critical thinking about the topic. Check in with at least one member of the teaching faculty and get her/his feedback about your ideas for a few minutes before leaving today.

Once you and your partner have decided on a suitable research problem, it’s time to become an expert on the topic. This will mean searching the literature, talking with people, generating some ideas and critically evaluating them. To keep track of your efforts, you should start a wiki catalog on your OpenWetWare user page. How you format the page is up to you but check out the “yeast rebuild” or the “T7.2” wiki pages on OpenWetWare for examples of research ideas in process. As part of a later FNT assignment, you will have to print out your wiki page specifying your topic, your research goal and at least two helpful references that you’ve read and summarized.

Write a 5ish sentence paragraph documenting your TEM observations while they are fresh in your mind. For now, you should write only about your own samples and those of the groups who happened to attend TEM with you. When you write the final report and have access to everyone's images, you might choose to include comments about yet other groups as well. Be sure to discuss all imaging/analysis modes that were performed. When possible, either make a quantitative statement, or note what numbers you will later estimate in order to make one. Example: "For the X condition, we observed nano wires with a smaller diameter than those in the Y condition. The X wires had about a 10 nm? diameter, and the Y wires were about 2?-fold larger." Feel free to include an educated guess as in the example.