In July of 2010, during the first UN conference for a global mercury treaty it was recorded that mercury levels in hair samples of delegates from developing countries on average was twice as high as average levels in hair samples of delegates from developed nations. While the dangers of high mercury water levels in developing nations around the world have been identified, methods for purifying contaminated water are a step behind from where they need to be. The proposed research will address efficient ways of isolating and extracting mercury from contaminated water in a biologically feasible manner.

Coal is one of the largest energy sources not only in the United States, but also internationally. Coal contains mercury which is released into the atmosphere as it is burned. This gaseous form then condenses and falls to the earth with rain and snow, thereby polluting not only soil but also water systems. Mercury poisoning has become an increasing cause for concern. Mercury exposure from fish consumption poses a serious threat to human health, particularly to the central nervous and cardiovascular systems. It is particularly harmful to early brain development.

While many technologies exists to monitor and decrease mercury pollution, most are either not cost-effective or require too much energy, making them poor options for third world countries. Currently, the two most promising methods of purification, the ZeeWeed 500 and Blue Pro, rely on large scale systems which pass water through filters that are used to extract mercury. Though these systems achieve unparalleled efficiency, their complexity takes away from potential wide scale usage. We look to combine not only cost efficiency but also minimal energy dependence into our idea to give an efficient and widely accessible means to large scale mercury purification.

From the literature it appears that few if any large-scale projects take advantage of bioremediation to reduce mercury contamination. Bacteria that specifically binds mercury have been constructed, and we want to manipulate the genes so it can be used for a large-scale application. We hope to achieve this by utilizing mechanisms found in quorum sensing and biofilm creation to allow the bacterial cells to be easily collected from the water. This will require biologically engineering a pathway that responds to the bound mercury at the cell membrane by initiating quorum sensing to aggregate the other mercury-bound bacteria. This method will allow the bacteria to form visible clumps that can be easily removed from a lake or pond without the use of expensive filtration systems. 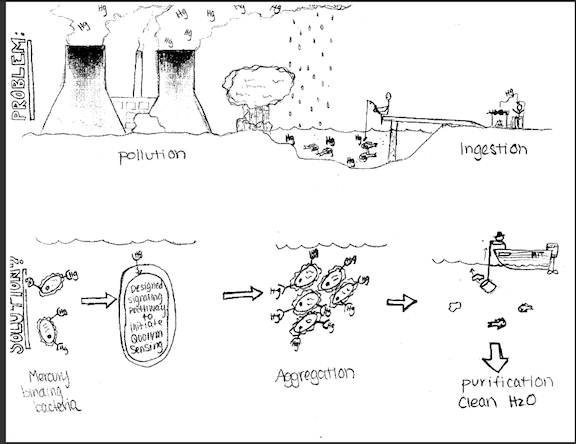