Today you'll wash the nanowires you synthesized last time and visualize a sample of them by TEM. The rest of the nanowires will be stored in a mortar until next time, when you'll grind them with some carbon and teflon for assembly into a battery. 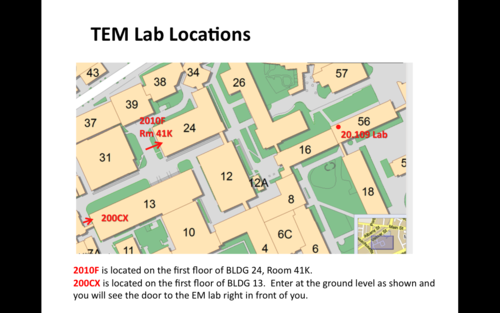 map from John to TEM facilities

Before you begin today's protocols, be sure to make some notes in your lab notebook about the appearance of the solution of nanowires. The next steps are devised to collect and wash the CTAB off the nanowires. You'll end up with some concentrated nanowires to observe by TEM and also to dry for assembly into a battery next time.

Each group should prepare a TEM grid. This will allow for some duplicates to be visualized in case the grid is damaged or different kinds of EM are being performed.

Part 3: Harvesting the remainder of your nanowires

You should now be considering the presentation materials themselves and if you can, start working on the materials you will use to describe your idea. Reconsult the specific directions for what you'll need as well as the more general guidelines for all oral presentations.