The accomplishments of the natural world can inspire us to great engineering feats. Biomineralization is one particularly impressive trick nature pulls off. Vertebrates, invertebrates and plants all have ways to precisely position inorganic substrates into crystalline order. For example, calcium carbonate will form unstructured dust in the absence of genetically-programmed organizers, but the same material can be made into the hard and luminous shells of sea creatures. Similarly, diatoms organize silicon dioxide into intricate patterns that manufacturers of electronic components can’t begin to approach. In one more instance, bacteria align iron inside their cytoplasm to form magnetic rods on the submicron scale. These feats are accomplished without harsh chemicals, without extreme temperatures, and without noxious wastes that poison the nests of the organisms themselves. Humans have a lot to learn from nature’s successes. In the upcoming weeks we’ll use a virus that infects bacteria, namely the bacteriophage M13, and we'll rely on the self-assembling coat of this virus to template gold and silver nanowires. The interaction of metals with a protein on the phage coat yields nanoscale-particles with useful energetic properties, as we’ll see.

The bacteriophage M13 is a member of the filamentous phage family. It has a long (~900 nm), narrow (~20 nm) protein coat that encases a small (~6.4 kb) single stranded DNA genome. The genome encodes 11 proteins, five of which are exposed on the phage’s protein coat and six of which are involved in phage maturation inside its E. coli host. The phage coat is primarily assembled from a 50 amino acid protein called pVIII (or p8), which is sensibly enough encoded by gene VIII (or g8) in the phage genome. For a wild type M13 particle, it takes about ~2700 copies of p8 to make the ~900 nm long coat. The coat's dimensions are flexible though and the number of p8 copies adjusts to accommodate the size of the single stranded genome it packages. For example, when the phage genome was mutated to reduce its number of DNA bases (from 6.4 kb to 221 bp) [2], then the p8 coat “shrink wraps" around the reduced genome, decreasing the number of p8 copies to less than 100. Electron micrographs of the resulting “microphage” and its wild type parent are shown below (image courtesy of Esther Bullitt, Boston University School of Medicine), where the black bar in each image is 50 nm long. And what about the upper limit to the length of the phage particle? Anecdotally, viable phage seems to top out at approximately twice the natural DNA content. However, deletion of a phage protein (p3) prevents full escape from the host E. coli, and phages that are 10-20X the normal length with several copies of the phage genome can be seen shedding from the E. coli host.

The general stages to a viral life cycle are: infection, replication of the viral genome, assembly of new viral particles and then release of the progeny particles from the host. Filamentous phages use a protein at their tip, namely p3, to contact a bacterial structure known as the F pilus to infect E. coli. The phage genome is then transferred through the pilus to the cytoplasm of the bacterial cell where resident proteins convert the single stranded DNA genome to a double stranded replicative form (“RF”). This DNA then serves as a template for expression of the phage genes and produces new phage particles that shed off the surface of the infected cell. Other phage are known to lyse their host cells but in the case of M13 and E. coli, they co-exist in a balanced way, allowing the growth of both host and virus, though the infection does slow down the doubling time of the E. coli (as we'll see later today).

phage display
Phage display has been used for decades as a tool for discovery. This technique exploits natural selection and identifies functional peptide sequences that can be fused to the phage coat. Most often it’s the p3 protein at the phage tip that’s used for phage display because, despite the limited number of displayed peptides per phage (on the order of 5), there is enough flexibility to accommodate peptides of 20 to 30 amino acids. The other protein used for phage display, p8, is presented at much higher copy number per phage (on the order of 2700) but it has limited flexibilty. The semi-crystalline packing of p8 on the phage coat restricts fusions to only 4 to 6 neutral or negatively charged amino acids. For scientists who can tolerate a mix of p8 proteins on the phage coat for their work, there are phage-display variations that mix and match fusion and wild-type proteins on a phage coat, but for those who want phage of a particular form, the options are limited.

Nonetheless, peptides with remarkably diverse functions have been isolated with phage display. Once the fusion site is chosen, a library of sequences encoding random peptides can be synthesized and cloned. In this way a pool of phage, each with different fusions, can be made. Finally, the phage pool can be screened for interesting behaviors or properties. Peptide-fusion proteins to p8 or p3 that include stop codons or intolerable sequences are largely lost from the population after the first round of “panning.” Other phage that can bind to a substance of interest or show enzyme activity or glow green…, these remain and can be directly isolated from the pool or further enriched by a second, third, fourth round of panning. Ultimately anywhere from 10 to 1000 candidate sequences may remain from a starting pool of 1 billion [3].

Despite phage display techniques being available for more than a generation, this tool has been applied only recently to the search for novel materials. Largely it’s been Angela Belcher and her lab who highlighted and then demonstrated the usefulness of this search tool for finding peptides that interact with materials to meet human needs. That M13 could interact with inorganic materials could not have been predicted from the original genetic studies on the phage, but there was also no one who had tried it. Phage that can bind to cobalt oxide, gold, iridium and indium tin oxide are all in-hand thanks to their work (e.g see reference [4]). Today you will harvest and titer a phage that can bind to gold since these can be used to build nanowires next time.

In advance of this lab, a bacterial host ( XL1-blue) was infected with the modified M13 phage called "8#9." The p8 modification (=VSGSSPDS) was isolated from a library of p8 mutants that enable the phage to bind thin gold films PMID: 16178252. Today you will harvest the phage from the supernatant of the infected bacterial culture and then titer it. You will begin the lab by preparing the gold and silver solutions you'll need for next time.

You should wear your lab coat, your safety glasses and gloves throughout the preparation of these materials for your chemical synthesis.

Each group should make 20 ml of a 0.1 M solution of hexadecyltrimethylammonium bromide ("CTAB"). The molecular weight of CTAB is 364.45 and the solution can be prepared in distilled water in a 50 ml conical tube.

Your group will be responsible for making one of the following solutions that the class will use in the synthesis of nanowires. Pool the volume you make with a second group making the same solution if there is another group assigned this task.

The idea of this technique is simple. Since phage infection slows down the growth of bacteria, any phage-infected cell will grow less quickly than an uninfected one, giving rise to a zone that is more clear on a lawn of fully grown cells. This zone is called a plaque and by counting the number of plaques formed, it is possible to measure the number of infective phage in the sample you are testing. The number of infected phages is measured as PFUs, which is "plaque forming units per ul." 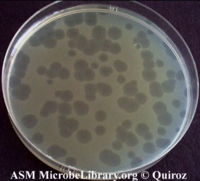 plaques formed by bacteriophage upon infection of susceptible bacteria

The primary assignment for this experimental module will be for you and your partner to develop a scientific research proposal. For next time, please describe five recent findings that might define an interesting research question. You should hand in a 3-5 sentence description of each topic and list the reference that led you to each item. The topics you pick can be related to any aspect of the class, i.e. DNA, system engineering, or bio-material engineering. During lab next time, you and your partner will review the topics and narrow your choices, identifying one or perhaps two topics for further research.