From OpenWetWare
(Redirected from User:LE Borgne)
Jump to navigationJump to search

and is hosted within the Institute of Genetic and Development (Rennes, France): *Institut de Génétique et Développement de Rennes 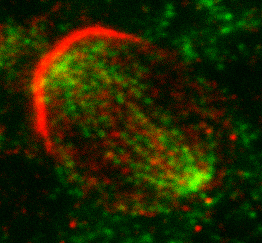 Asymmetric cell division is a conserved mechanism by which cell fate diversity is generated during Metazoan development. How one cell can generate two daughter cells with different identities and how defects in this asymmetry can contribute to cancer are the fundamental questions we are addressing in Drosophila. We are investigating this process in the context of asymmetric cell division of neural precursor cells, called Sensory Organ Precursor (SOP). These latter undergo four rounds of asymmetric divisions, in which mother cells generate distinct daughters via the unequal segregation of the cell-fate determinants Numb and Neuralized at mitosis. At each division binary cell fate decision are regulated by Delta-Notch dependent cell-cell signalling. Numb is an endocytic protein that can bind to Notch and a four pass transmembrane protein named Sanpodo (Spdo), a protein required for Notch activation in SOP lineage, thereby preventing Notch activation in this cell. Neur acts in SOPs and pIIb cells to regulate the endocytosis and signalling activity of Dl, thereby promoting N activation in non-SOP (lateral inhibition) and pIIa cells (binary cell fate decision), respectively. Despite intensive studies, the mechanism whereby Neur regulates Dl activity is not known. Two non-exclusive models have been proposed to explain the role of ubiquitin-dependent endocytosis of Dl in Notch receptor activation. First, the ‘pulling’ model proposes that internalization of Dl bound to its receptor exerts pulling forces on Notch and induces a conformational change exposing the S2 cleavage site to metalloproteases. Alternatively, the ‘activation/recycling’ model proposes that internalization is required to promote the formation of active ligands that are recycled back to the cell surface to activate Notch1. However the nature of the ligand activation and the subcellular localisation where recycled Dl could interact with Notch to produce signalling remained unknown. Our research aims to understand how intracellular trafficking contributes to the definition of the polarity axis of the divisions and ensure the proper spatio-temporal regulation of Notch-dependent fate decision.