From OpenWetWare
(Redirected from User:JTabor)
Jump to navigationJump to search

I will be starting up my lab in the Department of Bioengineering at Rice University in the Fall of 2010. I am looking to bring on creative students and postdocs with experience in molecular biology, evolutionary biology, microbiology, developmental biology, biophysics and chemical engineering. Research will focus on engineering multicellular behaviors. If you are interested in joining the lab, please email me.

I am interested in programming the behaviors of cells and organisms using synthetic genetic circuits. 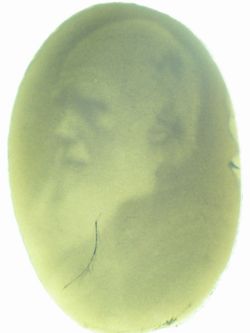 I was involved with a group that designed a "bacterial photography" system in which a community of E.coli act as a biological film capable of genetically "printing" an image of light. This was accomplished by rewiring an osmo-responsive signal transduction system in E.coli to respond to red light. The light sensor was then used to control the expression of black pigment, such that dark areas of a projected image result in dark areas on the bacterial plate and light areas result in light areas. Over the entire population, the image is printed at a theoretical resolution of over 100 Megapixels per square inch. This is due to relatively small size of bacteria (1x3 microns).

We recently reprogrammed the photographic bacteria to identify the edges of objects within the projected image. In the bacterial edge detector, each cell determines whether it is located in the light, the dark, or at the boundary of light and dark. Only those who are at a boundary produce the black pigment. The emergent result over the entire population is the outline of the projected image. Edge detection is a well studied serial algorithm where computation time increases linearly with the number of pixels (approximately as the square of image size). Because the bacterial edge detector is a parallel computer, the algorithm runs in constant time regardless of image size. This bottom-up approach highlights the parallel information processing abilities inherent to biological systems, a feature which is taken advantage of in natural systems such as metazoan development and neural networks.

We have recently expanded light regulation in E.coli such that the expression of different genes can be controlled with different colors of light.