Sorry to take so long updating, but here is what I have been doing for the last week...

After the failure at the most recent gliding motility assay, I decided it was about time to start investigating the activity of our kinesin. In order to do this, I needed to use the PhosFree kit from Cytoskeleton. This kit contains "phosphorus standard" (1mM), perchloric acid (0.6 M), and malachite green.

On Tuesday I made the first attempt to calibrate the kit by making a standard curve. As per the cytoskeleton instructions, I measured out

It was at this point that I learned that the final volume was not going to be large enough to use in the spectrophotometer, so I went back and tripled the phosphate and water so that I had...

I then realized that I would not be able to use the spectrophotometer that day, so these were put in the fridge until I could use the machine the following day.

On Wednesday, I pulled out my six samples, transfered them into cuvettes, and added 300uL "Quencher" (0.6 M perchloric acid) to each sample, then 300uL "Activator" (malachite green). The final total volume was 660 uL. I waited exactly 10 minutes, put them in the spectrophotometer, and measured the absorbance of each sample at 650 nm.

The results of this were not stellar. The absorbance for each sample was too low (in comparison with Cytoskeleton and Koch's work at Sandia), and for whatever reason the 100mM sample absorbed more than the 50 mM sample (they weren't switched, there was an obvious color difference).

There are a few reasons I think why these results were so crappy. The first possibility is that since I went back and tripled the phosphorus and water volumes, it is very possible that I made a mistake the second time. Second, and I think the main reason, is that when I performed the measurements, I put the cuvettes all the way at the bottom of the holders in the spectrophotometer. When I did this, some of the light that was actually above the level of the sample. Also, I did see a few bubbles at the tops of the cuvettes, so it is possible that the discrepancy in measurements between the 50 and 100mM sample was due to some sort of bubble at the top.

Thursday I tried it again, this time determined to do it right away and correctly. I used 12 samples this time so that I could get a more accurate curve. I did measure the absorbance of just the empty cuvettes, but I found the result to be so low(0.007) that it was negligible, also, that is what the 0mM sample is for.

I mixed all of this, in the above order, in cuvettes. However, I could only measure six at a time due to the spectrophotometer. So I put off adding the malachite green in the the last 6 until I had measured the others. I waited 10.5 minutes this time, as I can not instantly pipette into 6 tubes I wanted to give the last ones the full 10 minutes required for the reaction. I was also super careful this time to put the cuvettes in a little higher so that the same inaccuracies were avoided. 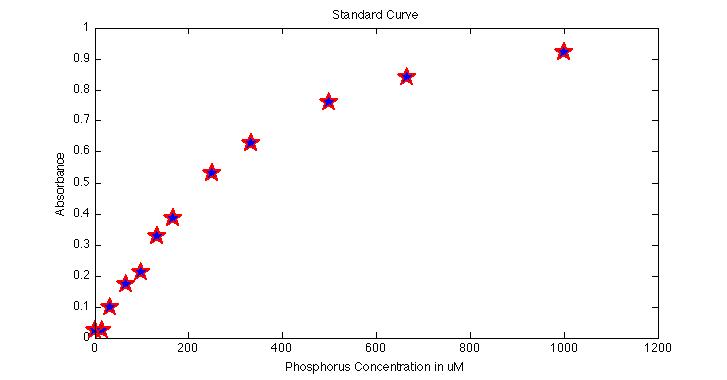 So this is the standard curve! Now, this doesn't look much at all like the linear thing they showed in the cytoskeleton assay manual, nor the 1/2 exponential 1/2 linear plot Koch did at Sandia. However, I do believe that this is sort of correct. I found a paper "Improved procedures for the determination of lipid phosphorus by malachite green" by Zhou and Arthur at the University of Manitoba (1992) that reported very similar results. Their plot also slowed at higher concentrations and had the same bend as mine...

I did fit a line to the plot, and found that it did not look very good. The equation for this line was:

Also, I calculated the error between each data point and this line and found that each point had an error of about 20%. So this linear fit is not the best, but it gives us a rough approximation for how much phosphorus is in a solution.