01:56, 22 October 2008 (EDT)
I still think you should make a separate page in your lab notebook for your thoughts and results while you are "crunching" your data. Then, pick out the most important things for this summary. As is, it's all good info, but a bit hard to read as a "summary." Plus, the appropriate thing to do as an experimenter is to record your thoughts and results in your notebook as you go along, just as you do when you're taking the data.

Also, I looked at your excel sheets (yes, I agree the second one was better (easier to follow)!)...you have nice graphs in there...those would be great to upload to the wiki so you can display them like you do the oscilloscope photo! Nobody except me will look at them in your excel file.

All that said, I think you did a good job on this lab. Clearly you learned some more data analysis techniques, and I liked how you pushed during lab time to find a good way to acquire and analyze the charge time data (though you didn't succeed yet). Besides what I've said in my other comments (the validity of the weighted mean being a very important one) the one other thing I want to push you on as experimentalist: what is up with the 2nd order data & specifically the green point? Did you notice this? If so, why no discussion? If not, always be on the lookout for those kinds of repeatable "weird" points!

look up Planck's Constant in lab manual linked below, to see what was basically required for this lab.

In this experiment we used a mercury vapor light source and an insturment refered to in the lab manual as the h/e apparatus to measure and compare the stopping potential of...

i) the same band in the mercury spectrum at differing intensities

Because Vmax varies so little between 100% and 20% intensity I would conclude, in light of the data we collected, that Vmax does not depend on the intensity.

When looking at the effect of the intensity of the light on charging time, the trend seemed to be that as intensity decreased, charging time increased (which is the expected result). But if you look at our data you will see that this isn't always the case, for both Blue I and Blue II it took less time on average to reach Vmax at 60% intensity than at 80%. Also the greatest inconsistancy in our data is the time required to reach Vmax, the SDT of the average time is, in the majority of the trials, quite large.

According to our data, the shorter the wavelength (or the higher the frequency) the greater the stopping potential (Vmax) of that color. If you look at our data you will see the the greates Vmax corresponds to Blue I (the UV line) which has a frequency,ν≈8.2E+14, and the smallest Vmax corresponds to Orange (yellow according to the manuel) which has a frequency, ν≈5.1E+14. This was one trend that was consistant through out the data we collect in this lab.

I would say that our results definitely support the photon (quantum) model of light in that our data shows that an increase in the frequency of the light is what leads to a greater stopping potential, not an increase in intensity. I would not say that you could conclude from our data that the number of electrons (the photoelectric current) increases with increased intensity, because there was too much deviation in our data concerning the time it took to reach Vmax at a given intensity to draw any meaningful conclusions.

According to section 5.6 (thechnical information on the h/e apparatus) in the Planck's Constant lab (see lab manual), the h/e apparatus has a high impedance amplifier that allows us to measure Vmax with a voltmeter. The hight impedance means that the voltage coming in equals the voltage going out, ie. a photoelectric current comes in, goes out unchanged and gets measured by the voltmeter and we record Vmax. While the apparatus is good it is not perfect and as the amount of time necessary to charge the capacitor increases there is some current drain which leads to a decrease in Vmax as intensity decreases. 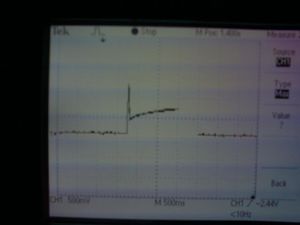 00:41, 22 October 2008 (EDT)
This is also a good description. From what I remember, though, we were able to get an indication from the scope reading that the charging time indeed was significantly slower (though tough to measure) for the lower intensities compared with higher. Thus, I think you can make stronger claims above about this supporting the photon theory of light.

We looked at the wave form the voltage going from zero to Vmax using the osciliscope, and got the attached picture. You can see there is an initial spike in voltage greater in height to Vmax that corresponds with the release of the discharge (zero) switch on the h/e apparatus (something else I learned reading section 5.6) and allows the apparatus to begin building up charge, then the voltage dipps and grows again in the expected exponitial fassion, something like 1-e-x until it reaches Vmax. In this picture I'm not sure if the voltage made it all the way to Vmax, we froze the image before the constant max voltage really got established. So the increase in voltage as is approaches Vmax follows the expected curve, but it reaches Vmax so quickly (the time it took to form the picture shown bellow couldn't have been more than a second or two, maybe less) that given the methods we were using in this lab to measure charging time we were inbarking on an impossible task from the begining and its no wonder that our data in that area was inconclusive.

I used an Excel function to calculate least squares fit for h and W0 along with their error for each trial.

01:29, 22 October 2008 (EDT)
I looked at your excel sheet and I do think you calculated the weighted mean correctly. Good! Here is a wikipedia article to show how to get the new variance.
However I want you to think about this question: Look at your two numbers from the first order. Then look at your two numbers from the second order. Are the two groups close to each other, relative to their uncertainties? Do you feel comfortable reporting the weighted average of all of these measurements?

With the help of Dr Koch, I got a formula for the weighted average for the four trials. The weighted average is an average of the four values of h and W0 that 'wieghts' the each separate value depending on its error (ie; it distance from the best fit line). Dr Koch left it to me to find out how to deal with the error, but though I found information on least square fitting least squares fit and how to calculate a weithted average, I found nothing I could quickly understand on how to deal with error (I did find a good section on error propagation, but I didn't know how to apply it). Bellow are my weighted averages for h and W0 along with their respective error, but the listed error is just the SEM of the error of the four trials. The actual error should be less, since the final calculated values of h and W0 are more dependent on the values that contained the least amount of error (deviate least from the best fit line), this is an area where I have more to learn.

00:52, 22 October 2008 (EDT)
Yes, you are looking at it correctly, that is exactly the right way to compare your measurements to the accepted value (see whether it is close to your range, relative to the SEM). Though I disagree with your final number, good job on the comparison!

I am surprised, because if I am looking at my calculated data correctly we actually got fairly acurate results, and I was expecting to be pretty far off, because systematic error.

I learned alot this lab, mainly sitting right here working with Excel. I learned how I should enter my data so that it can be easily manipulated and read (look at the difference between the spread sheets for experiment I and II). I learned that to veiw a waveform on an oscilliscope use DC coupling, and that the 1/V on the voltmeter is an indicator as to how precisely the insturment is measuring voltage (not an indicator to divide all measurments by 20). I learned that I need to buy one of those data analysis booksSJK 01:29, 22 October 2008 (EDT)

over break, because data manipulation is a whole other kind of math and I would like to have a better refrence than what I get drifting around the internet. *Arianna Pregenzer-Wenzler 01:23, 15 October 2008 (EDT):