When I first opened the box, the only wire I saw was one that was missing a DIN connector on one end. This wire is a welcome blessing since I plan on changing the system up to use a multicolored LED system in order to keep using the fluorescence cube turret.

The LED has 4 wires. Two for power and 2 for modulation control. Since we will not be using any sort of modulation control, and the LEDs I got don't have ac EEPROM to control them, the black (EEPROM GND) and blue (EEPROM I/O) wires are useless to us. The white (–) and brown (+) are what we will use to power a different LED.

Since I have extra LEDs lying around, I went ahead and connected a red LED system that has 3 Luxeon LEDs mounted to a Luxeon Star with the extra cable. So far, it works great. 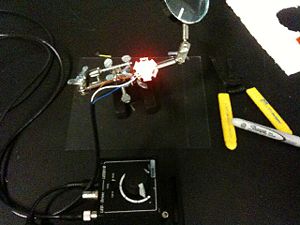 The next step is to mount this LED to the Thorlabs LED mount and use the engineered diffuser to try and combine the output of the 3 LEDs.

As I suspected, the LED housing from Thorlabs is just an intricately machined piece of aluminum. It's well worth the $100. At any rate, putting the 3 LED star in place of the green LED purchased with the housing required a bit of playing around. Adding the diffuser changed the placement of the lens and I had to figure out where to put the diffuser in order to get a uniform beam out. 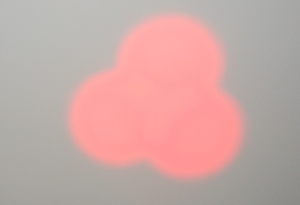 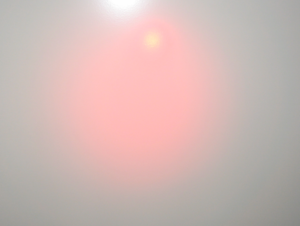 I should point out that I do loose power when using the diffuser. But, All you have to do is crank up the control unit to max it out at 700mA and you should get enough power.

I guess I will have to wait for the white LEDs to arrive before I make any other assessments.