Effect of Pressure on Cells

Every cell in the human body experiences some form of pressure. From the bone cells, which experience immense weight to keep our bodies upright to the blood cells, which experience large amounts of hydro-static pressure every time out heart beats. Yet, pressure is often overlooked in studies involving cells and cell culture. Therefore, in the field of mechanobiology, researchers aim to study the effect of pressure on cells. Most of these studies involve the use of big and expensive bioreactors that cam modulate the pressure of the entire system to ensure that all the cells are experiencing the same pressure equally. Though there is a lot to find out from these studies, almost of of these studies focus on a few aspects of the cells. These are the cell morphology, the rate of diffusion of substances such as growth media and oxygen and the growth rate of the cells.

Effect of Pressure on the Morphology of the Cell

Effect of Pressure on the Cell Membrane

Using Microfluidic Devices to Study The Effects of Pressure on Cells

It is important to note that the use of large bioreactors is a more than viable way of pressurizing a cell culture system and provides the most control over the range of pressures available. As such they are still in use for studies today.[3] However, the use of a microfluidic device could bring just about the same amount of control while consuming less space and resources.

One example of this is the study dine by Liu et al. where they created a microfluidic device that has a built-in electrofluidic pressure sensor to study endothelial cells under shear stress as well as hydrostatic pressure.[4] Similarly, Ho et al. created an advanced microfluidic device that exerts a cyclic hydrostatic pressure on the cells. Thus allowing for the study of cyclic compression on adherent cells, mimicking the environment experienced by cells in the blood vessels.[5] 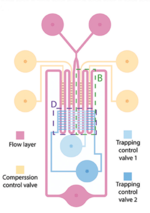 Fig. 2 Design of the microfluidic device for the study of cyclic pressure on cells 5 source