Basic Assumptions of the Model

Relevance of Lotka-Volterra to the 2D Model


Basic Results on the Steady Points and Vector Field

- The origin (0, 0)
- (d/c, a/b) (interestingly the steady population of the preys depends only on parameters associated to predators and vice-versa).

The previous results help sketch the general allure of the Vector Field : 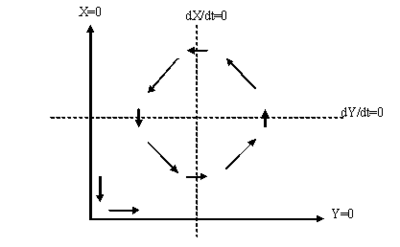 Let's imagine that there is an 'accident' such as an unexpected large number of birth of preys at time t (such scenario is realistic in a system like ours due to the intrinsic noise of the system). With the Lotka-volterra dynamic we will then jump to a different (closed) orbit corresponding to the 'accidental' values of the populations X and Y at time t.
If there is no other accident we will stay on the new orbit, hence settle on a different oscillatory regime. From an experimental point of view this is unsatisfying since we have no way of predicting the regime when we started the experiment. Furthermore nothing ensures us that the system will not jump again to another orbit. 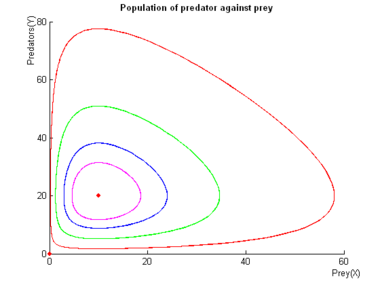 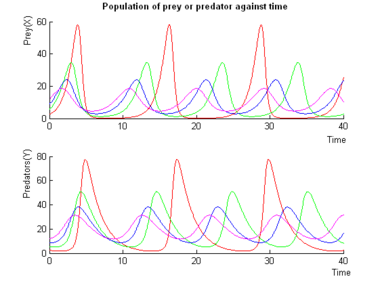 Simulations using different initial conditions are assigned different colors (the open-end of the trajectories is the starting point). In the phase diagram , red dots symbolise a steady points.

Control of the Oscillations

To see this , let's fix the initial conditions to (Xo,Yo). We can ensure the ratios (d/c and a/b) of the model parameters are such that the centre coincide with (Xo,Yo) and thus we have oscillations of zero amplitude. Now we increase these ratios steadily (the centre moves away from the origin and our initial point), which also increases the amplitude of the oscillations.
Once we have found an orbit with an amplitude that suits us, we can still modify the parameters so we get any frequency we want. It is straightforward to see that multiplying the parameters of the model (a,b,c and d) by a positive constant does not change the trajectories of the system, only the speed at which they are travelled. Consequently to obtain an oscillation of frequency f1 from an oscillation of frequency f0 it simply takes to multiply a,b,c and d by f1/f0 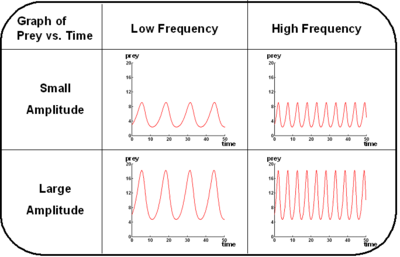 Comparison with different sets of parameters

Lotka-Volterra is a very simple dynamical model for prey-predator interactions. It is very similar in s

- it generates oscillations
- by playing on its parameters we can in theory obtain any amplitude and frequency.

However, Lotka-Volterra is also fatally flawed for a system like the one we wish to build as it is far too sensitive to any perturbation/accident/noise. This problem (linked to the concept of neutral stability)can be simply remedied to if we manage to build a system with a unique limit-cycle.