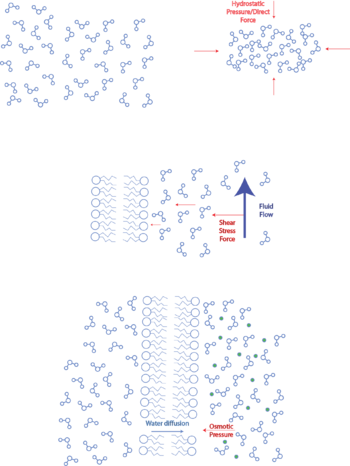 Illustration of forces due to various pressures

Mechanosensing refers to the ability of an organism to respond to changes in mechanical force on them or their environment. The mechanical stress can be in a variety of forms:

There are several levels of regulation which may respond to changes in mechanical stress. Channel proteins which respond to pressure act quickly to change the environment or metabolic state of the cell. Transcriptional control is also employed by a wide variety of organisms to adapt the cellular machinery to changing mechanical stresses.

High hydrostatic pressure (HHP) can cause a host of problems (reviewed in [1]). Complexes of biomolecules are forced to dissociate, resulting in inhibition of protein synthesis and other essential cellular processes. Very high pressures can cause unfolding of proteins or nucleic acids by interfering with hydrogen bonding and other non-covalent interactions. The equilibria of reactions accompanied by volume change are shifted, resulting in altered metabolic fluxes. Membrane fluidity is changed by close-packing of lipid tails in the bilayer. Together, these effects require many adaptations for organisms to react and survive.

Due to the deleterious effects on cellular machinery, some pasteurization processes for food employ extremely high pressures [2]. High pressures can kill pathogens effectively similar to heat pasteurization, but pressure doesn't damage the integrity and flavor of food products as much as high temperatures. 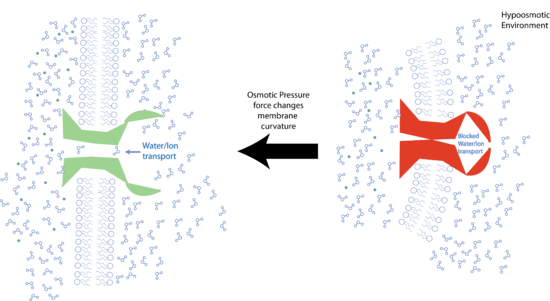 Many organisms have mechanosensitive channels [3] which are involved in changing metabolism more quickly than transcriptional changes allow. Changes in the shape of the membrane cause conformational changes that open the channel, allowing solvent or solutes to flow across the membrane.

One example of well-studied mechanosensitive channel protein is MscS (summarized in [4]). This protein forms a non-specific ion channel across the cell membrane in E. Coli which opens in response to osmotic changes in the environment. When the osmotic pressure across the membrane changes, the change in lipid bilayer structure causes MscS to open and allow ions and water to move across the membrane, which prevents cell lysis from osmotic pressure. Several other classes of mechanosensitive channels have been identified [5], which are generally classified by their size, the magnitude of pressure which elicits a response, and ion transport specificity.

The mechanosensitive channels in eukaryotes are not as well understood. There are a wide variety of channels with a multitude of functions (reviewed in [6]). Some channels resemble those of the bacterial Msc proteins, but unlike bacterial versions no direct evidence for mechanical gating has been found. This lack of evidence could be due to a different mechanism, since many eukaryotic channels require accessory proteins which tether to the cytoskeleton or extracellular matrix to elicit their response. Other classes of mechanosensitive channels in eukaryotes include the DEG/ENaC (Degenerin/Epithelial Na+ Channel) family, the K2P (two-pore domain K+) channels, and the TRP (Transient Receptor Potential) channels. All of these proteins have been implicated in a huge variety of mechanosensitive processes, including proprioreception (sensing relative positions of self body parts), hearing, gentle touch sensing, pain sensing, blood pressure sensing, pH and osmolarity sensing, and intestinal force sensing. For a more thorough discussion, see [6].

In some cases, changes in mechanical stress result in differential gene expression driven by mechanosensitive promoters.

In microbes responding to high pressure environments, genes that have increased expression might include cold- and heat-shock and other stress response proteins[7], barostable polymerases[8], or membrane proteins[9, 10]. Down-regulated genes might include nutrient transporters[11, 12]. In other cases, porin proteins which provide ion diffusion pathways are opened in response to osmotic stress across the membrane.

The first high pressure induced gene in bacteria was found in 1989[9] in a deep-ocean bacterium, Photobacterium profundum strain SS9. The gene encodes for OmpH, a large transmembrane protein which is involved in nutrient uptake. Later work found that the operon also contained two outer membrane proteins, OmpL[12] (induced at lower pressures ~1atm) and OmpI[10] (induced at much higher pressures ~400atm). Interestingly, all of these gene products encode for channel proteins, a subclass of which are the other main mechanosensing proteins. It has also been found that the lac promoter can be induced by extremely high pressures (~30 MPa) [13].

In addition to genes which are induced in response to pressure, many genes are repressed by HHP. The MalB operon is one example of a regulon repressed by high pressure [11]. Since there is no evidence of a repressor which acts only under high pressure, it is more likely that the transcription factors which induce genes constitutively are inactivated by the effects of pressure on protein folding.

One study in mesophilic bacteria screened genomic data for putative pressure responsive promoters and subsequently tested expression of a fluorescent report under control of random promoters from E. Coli. In this study, they found that a genuine SOS response was initiated by high pressures in E. Coli [14]. They found upregulation of uvrA, an endonuclease involved in repairing DNA damage, which is upregulated by deactivation of the LexA repressor. Based on this protein's role in the SOS response, they also examined two other LexA-regulated stress genes, recA (recombination protein involved in repairing DNA damage) and sulA (inhibitor of cell division), and found them to also be upregulated by pressure.

Eukaryotes, higher level multicellular organisms in particular, depend heavily on mechanical forces to maintain homeostasis and to orchestrate development in all stages of growth (reviewed in [15]). From the early stages of embryogenesis, the pressure of fluid accumulation contributes to the development of embryonic stem cells, ensuring the formation of pluripotent cells which can develop into organs later. Later in development, several mechanical forces help differentiate these stem cells into the various required cell types. For example, shear stress is involved in signalling the formation of endothelial cells that make up blood vessels, and direct mechanical force is also implicated in the differentiation and proper development of bone tissues. Failures in mechanosensing transcriptional controls have been implicated in several diseases, including arthritis, osteoporosis, atherosclerosis, and asthma. For a more thorough discussion of mechanical force contributions to transcriptional control in higher organisms, see [15].

The featured paper [16] was the only study I could find about a synthetic biology use of mechanosensitive channels. In the paper, synthetic liposomes made from a light-responsive phospholipid were used to test biotechnology applications of mechanosensitive channels. Patch clamp experiments were performed to test for conductivity changes which indicate transport of ions across their synthetic membranes. A patch clamp experiment involves inserting a pipette tip into a lipid bilayer and measuring conductivity changes, which indicate the opening and closing of the channel as a function of membrane curvature across the pipette opening. They found that exposure to light was able to cause a structural change in the phospolipid, thus changing membrane tension and curvature to cause opening of the channels. This system could potentially have applications in drug delivery or biological sensing applications.

There is a brief mention of an idea regarding mechanosensing as an earthquake sensor in the notebook section for the 2012 Baskent University team, but it seems that they chose to pursue a different idea related to quorum sensing.

In one of their projects, this team focused on engineering pressure sensitive promoters in mammalian cells. They were interested in using pressure as a way to control formation of biomaterials, with a goal of being able to engineer tissues and organs. Specifically, they created a touch pad which would form bone after a pressure change input. They first characterized fluid shear stress responsive promoters and used these to create a genetic toggle switch sensitive to pressure changes. Their touch pad contained human endothelial kidney (HEK) cells with production Bone Morphogenic Protein 2 (BMP2) under control of the pressure sensitive toggle switch, along with undifferentiated stem cells. When pressure is applied, BMP2 production turns on and causes the production of bone tissue via the differentiated stem cells.

This team focused on creating a strain of E. Coli which could be used in a biologically-based touch screen device ("Coli Touch"). Their system applied the pressure-sensitive tet promoter to the expression of GFP. They created a device containing a thin film of cells with this construct, which resulted in the surface selectively fluorescing only in areas which had pressure applied. Since this promoter requires very high pressures (30 MPA according to their page), they also worked on using directed evolution to engineering a promoter which can respond at a lower pressure. In addition, they designed a genetic toggle switch would allow a user to "erase" any writing on the device by activating a heat-sensitive construct which represses GFP production. Beyond these experimental aspects of the project, they also developed a mathematical model which related the pressure input to fluorescence level in order to understand the limitations they needed to develop for an effective write/erase cycle using their "Coli touch" systems.

It's worth noting that extremely high pressure is gaining popularity as a way to pasteurize foods without heat treatment[1]. The high pressure takes less of a toll on the quality of the food products than heat, but can be just as effective at killing microorganisms. It will be interesting to see if baro-resistant organisms arise from this trend. Some evidence has already shown the capability of mesophilic bacteria to adapt barotolerance mechanisms [17].

The use of mechanosensing proteins in genetically engineered machines has a lot of potential in a variety of applications. Any change in environment that affects the curvature of the cell membrane (i.e. osmolarity, shear stress from flow, direct force) can be detected using mechanosensitive channels. Alternatively, transcriptional regulators that respond to high hydrostatic pressure could be used to control function of hydrocarbon-digestion pathways for applications in cleaning up deep water oil spills.