MAGE or multiplex automated genome engineering is a technique developed in George Church's lab at Harvard that can be used for large-scale programming and evolution of cells. Many directed evolution and in vitro technologies are limited to manipulations of single genes, making it slow if trying to alter much of the chromosome. MAGE has advantages over these techniques because it is able to simultaneously target many locations on chromosome for modification.[1] Modification can be in the form of mismatch mutations, insertions, or deletions. Through the use of oligos with well-defined sequences, predictable modification can arise. However, through degenerate nucleotides, high-diversity chromosome modifications occur, producing a large variety of genetic variants. 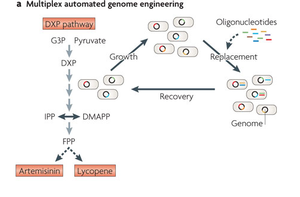 Modification in MAGE is done through oligo-mediated allelic replacement, which is controlled by the λ-Red single-stranded DNA binding protein β. This protein works by binding the single-stranded oligo and helping it to displace the Okazaki fragment on the lagging strand. Normally, the cell's repair proteins would spot the mismatch, but one of the key genes for the repair mechanism has been knocked out in the strain used, EcNR2. Upon the next round of DNA replication, the introduced oligo is copied and becomes part of genome. It is also possible that the fragments can be replaced by other near matching oligos in succeeding rounds, generating even more diversity. The Church group found using 90-mer oligos were the most efficient for replacement. This is due to the λ-Red protein needing at least 30 bps to complex DNA, and that 90bp presents a good chance of homology to the target, while oligos larger than 90-mer have a higher chance of forming secondary structure, greatly reducing replacement effieciency. 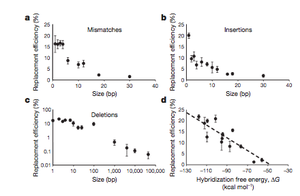 Efficiency of allelic replacement (a) mismatch, (b) insertion, (c) deletion.l[1]

Through oligo-mediated allelic replacement with the λ-Red single-stranded DNA binding protein β, mismatch mutations up to 30bp, insertions up to 30bp, and deletions of up to 45 kbp were introduced to cell populations.[1] The efficiency of a mismatch or insertion is based on its homology to the genome target, and deletion efficiency is based on size. Since oligos with more homology to target sites are incorporated at a higher frequency, MAGE can be tuned to provide desired evolution. Efficiency can be up to as high as 35% per cycle, but decreases greatly with increase in replacement size. On average, an 18 bp oligo has a 2-5% replacement frequency per cycle. [3]

Finding the rate of genomic diversification by MAGE was done by making mismatch changes using three different 90-mer oligos to target a part of the lacZ gene. Oligos cN6 and cN30 contained 6 and 30 sequential degenerate bases, respectively. While, iN6 oligos had 6 degenerate bases spread out over a 30 bp region. [1] The data comes from 96 random clonal isolates after MAGE cycles of 2, 5, 10, or 15, which gives a good idea of variation in the cell populations. In the cN6 population, more than 4.3 billion variants were produced each day. After 15 cycles, all genotype combinations of N6 cell populations were created from either the cN6 or iN6. While only 21.8% of the cN30 population had accomplished allelic replacement in 15 cycles, because it is much more difficult to replace 30 consecutive degenerate bases. The Church group determined that MAGE diversity is dependent on: "the degree of sequence variation desired at each locus, the number of loci targeted, and the number of MAGE cycles performed".[1]

Lycopene is a carotenoid pigment found in tomatoes and other red fruits and vegetables, because it is non-toxic and has antioxidant properties it is a good food coloring agent. It is also an important intermediate in the synthesis of many other carotenoids. http://en.wikipedia.org/wiki/Lycopene Screening lycopene production is simple because colonies producing it show intense red pigmentation. 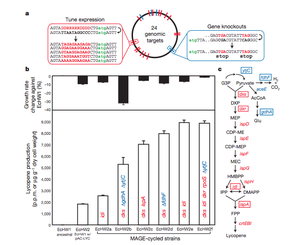 Exhibiting that MAGE can be used to target specific sequences with well-defined oligos, the 1-deoxy-D-xylulose-5-phosphate or DXP synthesis pathway responsible for lycopene production was targeted. The strain EcHW2 was used with plasmid pAC-LYC which contains essential genes for the final steps of lycopene production. To increase lycopene production, Wang et al. sought to modify 20 genes known to increase lycopene yield as well as 4 secondary genes responsible for decreasing yield. For the lycopene increasing genes, 90-mer oligos with degenerate RBS (DDRRRRRDDDD, D=A,G,T; R=A,G) [1] sequences with some homologous regions on the sides, were used for genes increasing lycopene production. Because the replaced RBS sites were programmed to be similar to the Shine-Dalgarno sequence (TAAGGAGGT), translation efficiency increased. For the remaining four genes, two nonsense mutations were inserted into the open reading frame via oligos, inactivating these genes and increasing lycopene yield. Screening ~10^5 colonies after 5-35 MAGE cycles resulted in cell populations increasing lycopene production five fold relative to the ancestral strain. Sequencing variants showed that RBS convergence toward the consensus Shine-Dalgarno sequence.

Hierarchical Conjugative Assembly (CAGE) was developed in George Church's lab as a means to merge sets of codon modifications from MAGE into genomes (each 1/4 size of E. coli genome) with 80 precise codon modifications. It was demonstrated that synonymous codon changes can be combined into strains without lethal effects on the cell population. E. coli has three stop codons and two release factors. Release factor 1 (RF1) recognizes UAA and UAG, while RF2 recognizes UAA and UGA. The hypothesis was that replacing all TAG codons with TAA codons, the genetic dependence on RF1 would be abolished and the newly introduced TAA codons would be recognized by RF2. The group sought to test if E. coli that had replaced all 314 TAG stop codons with TAA codons would be viable. (MG1655 genome) [5] 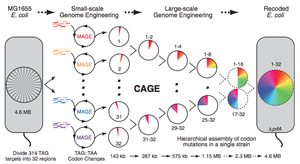 Strategy for splitting up genome and combining codon modifications.[6]

The genome of MG1655 (a mismatch repair-deficient strain) with 314 TAG stop codons (at least 43 essential genes and 39 TAG codon overlaps of ORF of other genes) was split up into 32 regions, 31 of which had 10 TAG stop codons and one with four. This strategy was selected because pools of at least 10 oligos have been shown to have high replacement efficiency and that the total number of cell divisons to achieve replacement. MAGE was used to introduce all 10 TAG=>TAA codon modifications. The 314 oligos encoding these specific mutations were designed computationally on the basis of previous MAGE experiments. After 18 cycles of MAGE allelic replacement frequencies were analyzed in 1504 clones (47 clones for each 32 segments). The average replacement frequency was 37 +/- 19% after 18 cycles, with 42% of the population unconverted. Of the remaning population, replacements from 1-10 alleles were observed. It was apparent two types of cells were shown to have been evolving: one that ready permits replacement and one largely resistant. It was also shown that no TAG stop codons were essential for survival or robust growth.[5]

Through the use of Hierarchical Conjugative Assembly (CAGE), merging the modifications from MAGE was accomplished. This technique is dependent upon bacterial conjugation to transfer the modified segments. The oriT sequence typically used for conjugation is fused with kanR for integration into E. coli genome by the λ-Red mediated dsDNA recombination. This makes for precise control of conjugation initiation location and use of a ~2-kb casette in place of the 30-kb Hfr fragment(conjugation factors are maintained on recipients as well). [5] 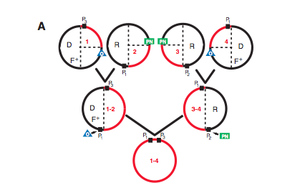 The site specific conjugation of donor and plasmid. [6]

The original 32 recoded strains were turned into 8 strains, each with 1/8 of the genome recoded. Two of these strains had a dysfunctional tolC phenotype, meaning that it passed the positive-negative control selections. MAGE was used to reconstruct these strains from the ancestral strain (also had mutation). From this, 4 strains each with 1/4 of the genome and 80 codon modifications were created and conjugation into one strain was attempted. In the end, 28 of the 31 conjugations were accomplished, still falling short of providing entire-genome modification. If all TAG stop codons can be successfully replaced with TAA stop codons then it may be possible to use the TAA codon for other uses such as incorporation of unnatural amino acids.[7]

MAGE was used to simultaneously modify all of the translational machinery of E. coli, while maintaining them functionally. Through 110 MAGE cycles, hexa-histidine tags were successfully added to the genes that code for all 38 translational proteins. The incorporation of His-tags into up to 8 different translation factors in a single strain does not dramatically affect the fitness of the cell. Additionally, three ribosomal subunit genes 50s, 30s, and 70s were his-tagged for purification of ribosomes using Ni-NTA. [3]

In 2010 the Venter group of JCVI synthesized a 1.08–mega–base pair genome and transplanted it to M. capricolum to create the new M. mycoides. [8] This synthetic biology achievement took 400 scientists year to create, along with a whopping price tag of $40 million. Meaning that, unless you are Craig Venter, this approach to whole-genome synthesis is likely unrealistic, but this is where MAGE has the potential to shine. Due to the relatively inexpensive nature of MAGE and the ability to modify much of the genome simultaneously many think that it could provide an alternative to the venter de novo synthesis.[1]However, with the very low frequency of both oligo transformation and recombination, and the fact that the Amberless E. coli remains unfinished, it does not seem that the Church groups' techniques provide a definite alternative to whole-genome synthesis in its current form. 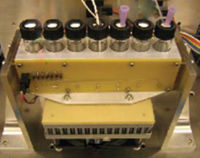 Machine for the automation of MAGE.[9]

Due to the cyclical and scalable features of the MAGE system, the Church group constructed a device to automate the MAGE process. It has chambers that maintain the growth of healthy cells and a device to electroporate the cells, dramatically speeding up the technique.[1] http://nextbigfuture.com/2011/07/accelerated-evolution-machine-being.html